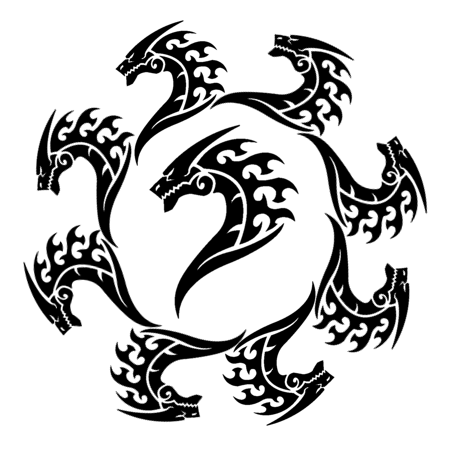 The unholy spawn of darkness and despair, the master of dark magic, creator of the vileblood dragons and Soshokzii demons, and the god of all things vile and wicked. Veistulsosjunsedov is the emperor of all evil. But before he was a god, he was a lowly human noble boy named Draco. Through a series of fortunate events, he rose from human noble, to immortal dragon cleric, to all powerful dragon god.

Veistulsosjunsedov's natural form is that of mastadonic, slender dragon with polished ebony scales and a long, sineous tail tipped with a poison barb. He posseses three heads, each representing one of his three personalities of evil. When a situation requires a softer, yet still imposing, touch, he appears as either his original form, a slender, black haired boy with tan skin and red eyes clad in black leather and wearing heeled boots, or a thin, muscular man with back length hair, a barbed tail, and two small horns protruding from his forehead, a fiendish version of what he may have looked like had he remained mortal.

Veistulsosjunsedov simply desires all things to accept him as the true master of the universe. Those that submit to his will and supremacy will be rewarded with power and riches. For any foolish enough to oppose him, only death and destruction await.

Followers of Veistulsosjunsedov come from the darkest dregs of society and the lowest pits of darkness and evil. They seek nothing more than to bring their master's ultimate goal to fruition. Everything they do, every evil act they commit, is all done in the Veistulsosjunsedov's name.

Skills*: *Always receives a 20 on checks.