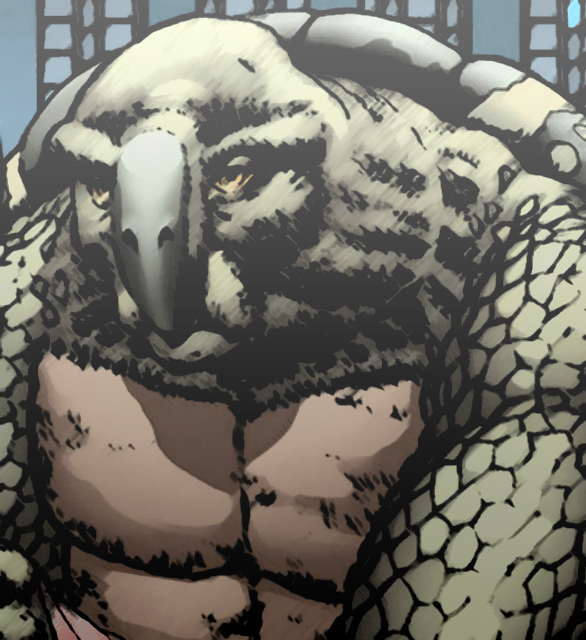 The Terrapin ponders, undoubtedly rather deeply.

The Terrapin are the slow but sturdy race that appeared a few centuries around the Terra Pin, a divine cylinder of incomprehensible size and structure that binds the Material Sphere, and therefore all of it's resident planes, together into the universe that it is. The pin gives structure to the planes, binding them in dimensional space so that they never move or collide, while also providing a means of travel between them.

After the Aesir were banished from the Deific Sphere, many of them began to use the Terra Pin as a means of transportation between the planes, as conservation of their divine power became paramount after being no longer exposed to the divine energies of the Light, and thus, used the divine linchpin as a convenient way to travel the planes in search of new homes and refuge. Over time, and as with many other races such as the Dragonkin, the influence of the Aesir managed to warp the primordial lifeforms that existed in the various planes near the Pin into what is now known as the Terrapin; A humanoid race of reptilian beast-men resembling the common turtle. They are especially concentrated in the Elemental Plane of Earth and the Elemental Plane of Water, where the ends of the Pin more often take on physical, dimensional shape and are more easily interacted with.

The Terrapin have been jokingly called a "race of giant, green bards and sages" by those who know of them. Not unlike the shelled creatures that they share similar appearances with, the race is slow to action, and slow in general; While physically imposing, they lack speed or dexterity required to make the most of it, and are culturally instilled with a love for philosophy, song, and scholarly pursuits. Because of this, most Terrapin, especially those who are likely to be found in Tirr, are comprised of individuals who pursue the paths of Bards, Monks, and Druids.

The stereotypical personality of a Terrapin individual is easily described as aloof, slow, and carefree. While there are some Terrapin who may very well be of a more fiery temperament and disposition, the vast majority do tend to fit this general archetype, with few differences. They tend to be proud of their stature, but do not draw attention to it. Similarly, the spectacle of seeing a Terrapin, a phenomenon that occurs around them often, does not tend to sway them unless it causes them direct discomfort or becomes an obstacle.

Very few come to the Material Plane, and no known civilization exists in the world of Tirr alongside the Men and Kin of the world. They are relatively isolated to the Elemental Planes from which they hail, as the Terra Pin allows for safety, refuge, and passage between the two. 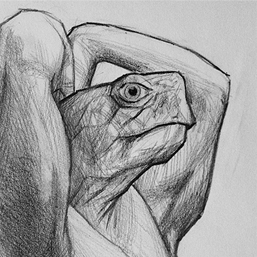 Resembling a large, humanoid turtle, the Terrapin is quite the sight to behold. Adult Terrapin typically share a host of features that distinguish them from the other races of the Material Sphere; The most prevalent being their incredibly large stature. Terrapin are almost always Large, which is a rarity among other sentient races of Tirr. Their skin consists of scales that typically are colored from a green hue, often ranging from a bright emerald to a deep, dark green. Scale colors of blue hues are uncommon, and therefore recessive, but still occur in new births at a significant rate.

All Terrapin carry a large, dense shell on their backs, which connects with a carapace that surrounds their torso from the upper chest to the groin. While Terrapin possess tremendous strength and endurance, this is a trademark defensive feature of their race. They are capable of retracting all of their limbs, including their short, thick neck, into the shell in order to further protect themselves from harm. The shell, itself, is typically ridged with small, shell fins, with the average being about five rows from the left to the right. The shell is also patterned with hexagonal segments of the material, called plastrons, which tend to be unique in size and colorization, and are formed into the shell itself.

Typically, the large shell of the Terrapin tends to restrict the individual to certain forms of movement. Terrapin can walk in bipedal motion, but to do so causes them to waddle in an almost exaggerated manner, due to the shells' restriction on their legs. This makes crawling the preferred method of travel by foot.

Other races tend to view Terrapin within a relatively limited number of perspectives: Civilized races, including those of Men, Elf, and in some cases, Kin, often see Terrapin as a rare form of spectacle, renowned for being relatively wise and experienced in many matters due to their longevity, and often greet them with interest and questions, one-hundred fold. With this type of interaction, the Terrapin are usually delighted, so long as they are properly accepted and their slow nature does not hamper their interactions.

Kin tend to have the most diverse views of the Terrapin. While the Terrapin themselves are kin, most races of Kin have trouble understanding the Terrapin. They are intellectuals, and most Kin come from violent, war-like races, with histories of, and in some cases, relatively modern, barbarianism. For many, this deviation from what is often looked at as the norm causes some rifts and difficulties when interacting with Terrapin. Others resent the Terrapin because they've managed to avoid the histories of conflict with the Kingdoms of Men and Elves that most other races of Kin have.

Catfolk (Common, and sometimes Sarli) and Merfolk tend to be exceptions to this. These races usually welcome the Terrapin, as they have become more open to civilized culture and have diverse cultures, themselves, therefore making the meeting with a Terrapin more about meeting a new face, than seeing a distant, strange cousin.

Terrapin are a stale bunch when it comes to matters of morality and order. They typically tend to drift to the alignments of Lawful Neutral and Neutral, as they are more interested in the pursuit of knowledge and culture, rather than concerning themselves with conflict. Because of their peaceful culture, Terrapin have devoted most of their sense of morality to upholding common law and order, sometimes to a point in which they seem to be one and the same.

While this doesn't mean that Terrapin easily approve of murder or other reprehensible acts just because they might be sanctioned (On the contrary, most are quite taken aback by such things), it does mean that due to a level of numbness to aspects of conflict and harm, Terrapin can be convinced that law, mutually agreed upon for the good of all under it, is the most important factor in a society, and therefore treasure it quite highly. Morality, in the sense that most other races would define it, often overlaps with this concept, for Terrapin.

Of course, the laws that Terrapin are accustomed to exist solely to mutually benefit all and ensure that all can advance their own culture and knowledge without fear, hence the common profession of Bards in Terrapin, something usually seen in those of Chaotic alignments.

Hailing from the elemental planes of Earth and Water, it goes without saying that the Terrapin race feels most at home in those aspects. Traditionally, nations do not exist in these planes, at least, not for the Terrapin; A mutual respect for established residence on the individual level is usually what preserves the home and land of any one creature.

In terms of terrain, Terrapin are capable swimmers, and enjoy a fair amount of moisture and dirt, making muddy terrain and wetlands their favorite environments, one of the major reasons they visit the material plane so much. The elemental planes are mostly comprised of singular elemental composition, making Tirr an attractive place to go on a pilgrimage, as it allows them to wander, from mudhole to swamp, from bay to earthen hollows.

Religion tends to not be as prevalent a force as one might think, in Terrapin culture. Terrapin sing of the Gods, of the Aesir, and are some of the best scribes and scholars, detailing events so far back into the history of the planes that some races are not aware even occurred. This, of course, means that they've come into contact with many deities over the course of their many, long, long lives, and certainly, they have their legends to say so. Active worship, however, is incredibly uncommon, unless it is done unintentionally, or inadvertently as a part of another action, such as with Jubila, who revels in song and celebration, no matter who it comes from.

Those few deities who do happen to gain the worship of the Terrapin usually tend to be deities of like nature. Jubila, Tirros, Undine, and Feylgara.

The language of Terrapin is a rather cryptic and ancient language, one that few other races have ever heard, and typically fewer have ever learned themselves. Derived from an ancient form of Draconic, and therefore using it's alphabet, this language is usually known simply as Terrapin, but most Terrapin are also skilled in Terran and Aquan. Being skilled learners, a Terrapin is quite capable of learning Common, and would usually learn this before making a pilgrimage to Tirr.

Terrapin name themselves by choice. At the 45th year, they are allowed to exchange their 'child' name for an adult name of their choice and design. This is an important ceremony, signifying the balance between the transitioning segments of their lives. Some choose to keep their child names if they mean enough to them, however.

The name is meant to be a reflection of all the knowledge a Terrapin has obtained, and how meaningful it has been to them. Some choose names from other cultures they've been fascinated with, others choose names derived from language, art, song, or history. Some names even have no meaning at all, which is not the norm, but is also not discouraged. Terrapin consider this to be the point at which an individual is no longer looked after, and most begin to make their own decisions and be respected for them.