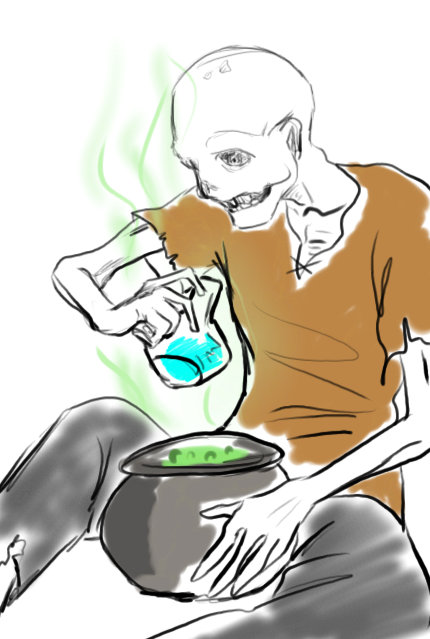 No pseudolich starts life as one. The race you were before you become an alchemical undead determines your physical features, save for certain traits that are universal to the process of becoming and living as a pseudolich. These features include: loss of body fat leading to skin becoming stretched over the musculature and bone, as well as the skin becoming pale and translucent, eyes becoming clouded, and when applicable, scales and/or feathers coming off in patches leaving bare skin. Your innards become wholly transformed in this process, replacing your biology with that of a modified undead.

For as long as mortal races have walked the planes, they have desired eternal life and freedom from death. Through magic, deed, and divine favour, the greatest and most powerful of mortals have achieved immortality, though often at great cost. One such method is to become a pseudolich - far removed from proper lichdom, requiring an entirely different process than the unspeakably evil ritual performed by wicked wizards of old. Through intensive research and experimentation, a truly skilled alchemist can discover that most sought-after of formulae; the elixir of undeath. Through regular doses of this masterful draught, a member of any race can transform themselves into an undying, untiring testament to alchemical achievement. It is most common for somebody to pursue this goal in order to fulfill a greater purpose - some research that would take millennia to perfect, the defense of a community, or the preservation of valuable knowledge throughout the ravages of time. Such a master of alchemy only comes about once in a generation, if that often, though at times there will be one brewer who creates elixir for many people, creating far more pseudoliches than just themselves. All told, though, the creation of a pseudolich is momentous and uncommon. Rare is the knowledge required, mysterious are the materials, and very common are those who view the transformation as an affront to nature and the gods, and the pseudoliches themselves as unarguably evil.

There is no real society of pseudoliches to speak of, the process of becoming one being rare and, to many, profane. However, when two or more gather with a similar purpose, they will travel together amicably. If multiple pseudoliches with more passive purposes congregate, they will often construct secluded communities, away from prying eyes as they work under their common bond of unlife.

They are not entirely alive nor are they the typical undead one sees like zombies or skeletons. Pseudoliches did not actually experience death, but rather a metamorphosis. Some were fed the elixirs that turned them unknowingly, and so lament in groups of their ruined lives. In the comfort of other damned souls, they form covens where they try their best to avoid civilization or keep hidden at the very least. They are no different from undead to the untrained eye, and so there is not a place in the world for them to rest their heads until they are killed.

Pseudolich covens are incredible well obscured and hard to find. They form tight knit communities that are wary to all who may approach. When in direst need however, some have reported being rescued by odd, horrifying skeletal creatures with their skin still on. It is thus speculated pseudoliches remain somewhat good samaritans if nearby. Some who were transformed by means of elixir are believed to put their long lives to use even, helping others.

Pseudoliches, in the end, are usually tied still within to their origin race. A former human retains his spectrum of alignments, for example. However, as their features have changed, so do they feel renewed. Pseudoliches often believe in second chances. More radical groups have been known to secretly dose others with draughts of the elixir, hoping to increase their numbers. Because the strains of isolation in immortality can drive many mad, these radical pseudoliches are sadly more common.

As a pseudolich became what they are, rather than being born as one, a typical given pseudolich's name will be that which they had prior to their transformation, determined by their prior race. However, some take on new names after they take their first dose of the elixir, to signify a new life. Typically, these names will be more akin to titles, related to the purpose for which they entered undeath. They no longer carried their names, as that alias was symbolically dead.

Potential Titles: The Guardian, The Storyteller, The Surgeon, The Watcher

A Pseudolich is an alchemically created undead, dedicated to purpose.
Ability Score Increase. Your Intelligence score increases by 2 and your Constitution score increases by 1.
Age. While a Pseudolich no longer physically ages, their skin becomes translucent and their muscles decay until they are mostly gone, resulting in a bone-ish appearance with stretched skin.
Alignment. Pseudoliches can be of any alignment with the predispositions of their previous race in mind.
Size. Because of the decay that comes with undeath, the cartilage between the bones is mostly gone in a given pseudolich. As a result, the average height is that of their birth race minus two inches and they are skinnier. Your size is Medium.
Speed. You base walking speed is 30 feet.
Alchemist. You are proficient with alchemist's supplies.
Undead Fortitude. When you are reduced to 0 hit points, you can drop to 1 hit point instead. You can't use this feature again until you finish a long rest.
Alchemical Undead Nature. Your creature typing is undead. You are immune to spells targeting humanoids like charm person. You don't require air, sleep, food, or water. You do not suffer the effects of exhaustion due to lack of rest and magic cannot put you to sleep. However, you require an alchemical substance to sustain you as per your Dependency. You are resistant to necrotic damage, but vulnerable to radiant damage.
Dependency. You must take one dose of the Necrolyte Compound that turned you into a pseudolich each week. For each day past one week that you don't take a dose, you will take one level of exhaustion. Because of this, you will die if you don't take a dose over a two-week period, as per rules on exhaustion in the PHB.
Necrolyte Compound. The chemical compound that turned you into a pseudolich, your tireless search for and innate connection to which has given you the knowledge you need to create it. You can recreate this formula by spending 12 hours and up to 10 gp worth of reagents making it again, producing 6 doses of the alchemical substance needed to keep you alive. If a pseudolich takes a Necrolyte Compound, it staves off their impending death, removing one level of exhaustion for each compound taken, and preventing Dependency from bestowing a level of exhaustion upon them for a week. If a creature that is not a pseudolich, undead or construct ingests six doses of this compound, it changes their race to that of a pseudolich.
Languages. You can speak, read and write Common and one other language from your original race.