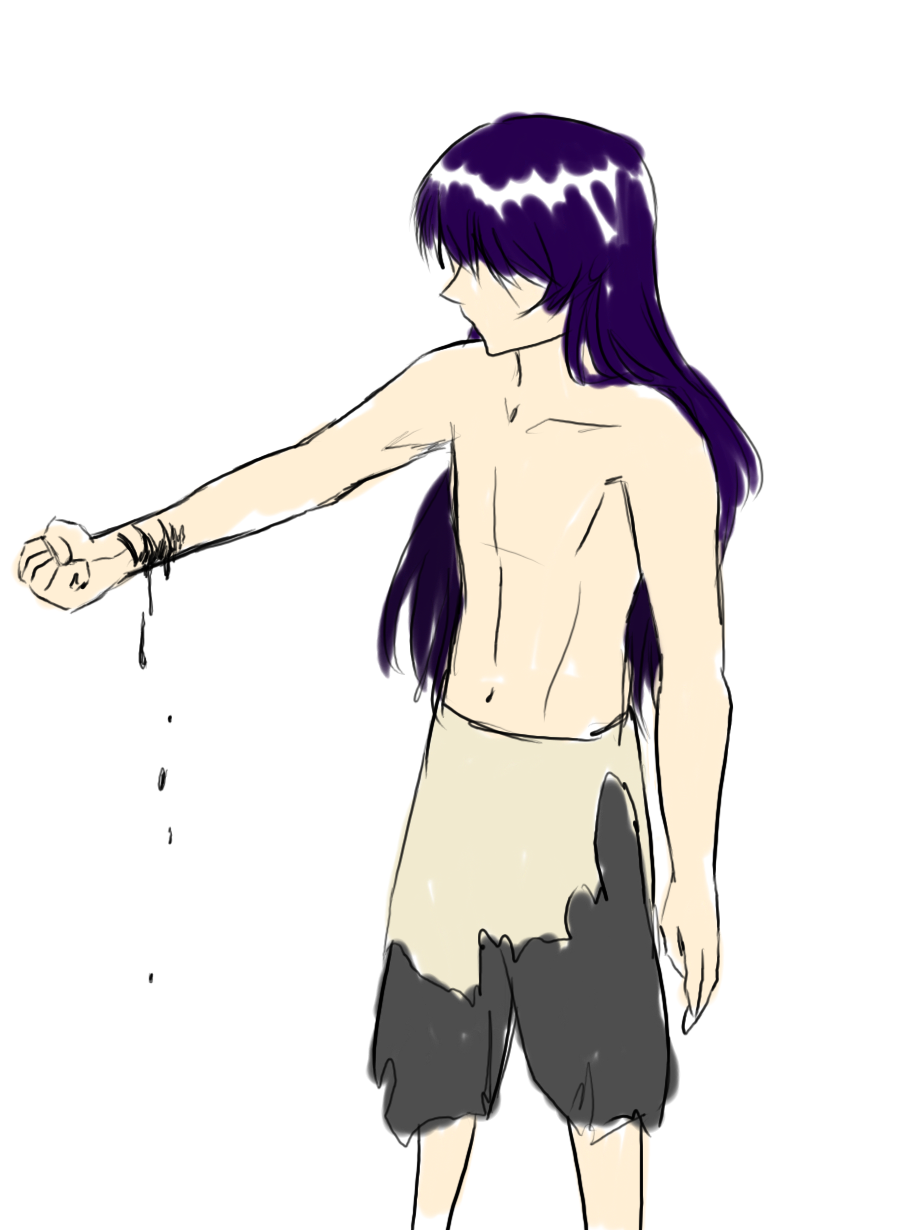 Nightbleeders look almost exactly like humans. The only defining outward factor is that their hair tends to grow to waist length, regardless of gender. They also have a unique trait in that their blood is pure black, which is the inspiration for their names. When enraged, their dark veins become more visible and they gain an ominous appearance. Many other races consider it a warning sign that they are cursed.

Nightbleeders claim a history from a world where they witness the end; one possible of all worlds. They inhabited a planet not too different from this one, supposedly worlds away, divided into three clans. Everything changed when the "Primfaya," or primal fire, erupted and destroyed their home. The fire was actually an extreme form of radiation which blazed over everything in its path, leaving only destruction in its wake. The nightbleeders, however, survived. Legend says that only 100 members of each of the four clans were able to survive in a bunker. When they emerged, they had nothing but destruction to see. For the longest time, they eked out a living among the rubble. Upon discovery a rift made by the residual radiation, many nightbleeders crossed the cosmos to this world, where they look to make a fresh start.

Not all buy into this story about them being refugees. There are many who believe them to be something more sinister, perhaps from the Underdark and such. There is also no record in existence of the nightbleeders world prior the Primfaya. The ebon blood in the veins of nightbleeders does not help with them getting along with others. They remain fiercely proud of their blood, which they attribute their survival of the radiation to.

According to the nightbleeder oral story tradition, in times before Primfaya, there was a commander, or leader of the clans was selected by the Flame — a magic item that would kill whoever is unworthy to wield it. When one was worthy however, the Flame gave them great strength and wisdom. One commander even managed to unite the warring clans in a battle against “Mount Weather.”

After the advent of Primfaya however, the Flame was lost. False commanders rose and fell like cards with their dictatorial aspirations in a time of darkness. The people then decided that the commander would be selected a new way. A warrior from each of the clans would be selected to fight for the right to lead. The only way to win was to kill the other two participants and take a necklace given to them by a Flame-Bearer. These are the priests of the nightbleeders, raised and trained in the old ways through tradition passed down from the days of the Flame.

The nightbleeders themselves fell into disunity following the Primfaya. Their three clans fractured and engaged in many power struggles under murky legislation. As they transmigrated to this new world, they bought their conflicts with them. They frequently engage in wars that are long and bloody, but involve no outsiders.

Despite this cacophonous way of life, nightbleeders will all set aside their differences once a year to celebrate “Unity Day”. This is held on the anniversary of the end of the world to celebrate their shared survival. All grudges and wars are suspended for a single day as they light a large bonfire and make merriment around it.

Those who survive radiation with pitch black blood
Ability Score Increase. Your Constitution score increases by 2.
Age. Nightbleeders mature as fast as humans, but tend to live longer, averaging at 130.
Alignment. Having both a warlike nature and a strict leader, nightbleeders do not tend towards chaos or law. However, they do tend towards good, wanting to help their people more than anything else, even willing to die for them.
Size. They stand roughly between 5 and 6 feet tall. Your size is Medium.
Speed. Your base walking speed is 30 feet.
Darkvision. You can see in dim light within 60 feet of you as if it were bright light, and in darkness as if it were dim light. You can't discern color in darkness, only shades of gray.
Survivor. Nightbleeders survived the end of the world when it was engulfed in radiation. You are resistant to radiant damage.
Languages. You can speak, read, and write Common and one other language of your choice.
Subrace. Choose from the trikru, skaikru, flowkru or azgeda subrace.

Trikru nightbleeders are warriors above all else and value combat mastery more than everything. They are at home in the woods, settling into several villages across a large forest. Their bodies are built stronger than other nightbleeders.

Ability Score Increase. Your Strength or Dexterity score increases by 1.
Combat Training. You have martial training that allows you to perform special combat maneuvers. You learn one maneuver of your choice from among those available to the Battle Master archetype in the fighter class. If a maneuver you use requires your target to make a saving throw to resist the maneuver's effects, the saving throw DC equals 8 + your proficiency bonus + your Strength or Dexterity modifier (your choice). You also gain one superiority die, which is a d6 (this die is added to any superiority dice you have from another source). This die is used to fuel your maneuvers. A superiority die is expended when you use it. You regain your expended superiority dice when you finish a long rest.
Nature's Warriors. You are proficient in the Nature and Animal Handling skills.

Skaikru nightbleeders consists of thinkers. They enjoy researching technology and try to make friends with everyone whenever possible, making them excellent diplomats and politicians. Skaikru thrive in city settings and are a bit scrawnier than other nightbleeders. But they make up for this in brains.

Flowkru nightbleeders live by the sea and coasts. They are philosophers and fisherman. They do not believe in fighting or conquest but are well armed and ready to defend themselves if need be.

Ability Score Increase. Your Wisdom score increases by 1.
Masters of Water. You know the shape water cantrip at 1st level. At 5th level, you can cast the tidal wave spell once, without material components. You regain use of this trait after finishing a long rest. Wisdom is your spellcasting ability for these spells.
Mariners. You have proficiency with nets and vehicles (water).

Azgedakru controlled vast swaths of land in the old world settling in some of the coldest regions. They value strong authority and a courageous warrior spirit. Being some of the most Brutal of the nightbleeders they often scar their faces to identify themselves amongst the other nightbleeders, wearing white war paint and they show they're ready for a fight when they cut their face and let themselves bleed.

Ability Score Increase. Your Strength score increases by 1.
Cold Acclimation. You are unaffected by the effects of Extreme Cold, as detailed in chapter 5 of the DMG.
Intimidating Appearence. You gain proficiency in the Intimidation skill and you can use your Strength instead of your Charisma for this skill.