Merihem: The Red Death, The Masked King, The Scarlet Inflictor, The Bringer of Plagues, Lord of the Masquerade[edit] 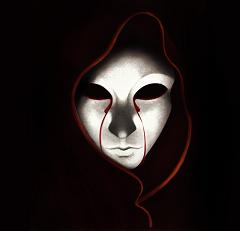 The Unholy Symbol of The Red Death

Merihem is the name for the monstrous and insane deity known to many as "The Red Death." Merihem is believed to been once a powerful Suel necromancer who angered Wee Jas, the Ruby Sorceress. Long ago, the vain wizard declared that he was equal to the Stern Lady in matters of necromancy and he also declared his undying love for her. Needless to say, Wee Jas did not take kindly to these boasts and she struck him down in the middle of a ritual that supposedly would end up causing the Rain of Colorless Fire to destroy the Suel Imperium. The chaotic magic and Wee Jas's deadly strike awoken the divine spark that resided in Merihem. The process of becoming a deity drove the necromancer insane and in his madness, he became imprisoned deep inside the Abyss. It is also believed that Merihem is also The Red Death that holds sway on the demiplane of Ravenloft.

Merihem has a hunger for life the likes of which rivals that of Nerull. He teaches those who are insane enough to worship him that the suffering of life through disease or murder is the greatest joy in existence. He demands regular sacrifices of sentient life, preferably those of humanoid races, to try and gain more strength to make up the loss of much of his power centuries ago. Despite the fact that he still believes that he loves her, his commands are to hunt down and destroy all temples and worshippers of Wee Jas, for whom he blames for current predicament. While many of his followers are on the Abyssal layer, hidden temples and churches that worship the Red Death are springing up and currently looking for the essence of Merihem in order to return it back to their lord.

Avatar of The Red Death

His temples are usually located deep underground in the cemeteries nearby large cities. His clerics are almost all vampires and cannibals who believe in the absolute power of Merihem. If a mysterious plague strikes a city, it is surely the work of Merihem's unholy clerics.

On his layer in the Abyss, one day a month, the inhibitants engaged in a grand celebration of worship called The Danse in which everyone dress up in costumes and play games or dance. Though the celebration is for The Red Death, he himself does not get involved. When The Danse nears its end, one random reveler is inflicted with a disease (usually Living Rot) and is sent to the Material Plane to spread it.

Merihem has four major cults that operate in the world. They are the Bloody Maw, the Ebon Fingers, the Plague Doctors, and the Havergast Sanatorium.

The Bloody Maw: a cult of cannibals and vampires, this cult represent the Hunger aspect of Merihem. Members of this cult stay very much hidden within the world, mostly picking off wayward travelers in the countryside. Many sects have been wiped out by paladin orders, only to pop up in another kingdom to continue their hunger of flesh and blood.

The Ebon Fingers: a cult of powerful necromancers, this cult represent the Undeath aspect of Merihem. This cult is considered the most powerful of the Merihem cults, members in this cult are defined by the lacquer coating on their fingers: one finger for initiates, two fingers for acolytes, three fingers for masters, four fingers for the grandmaster. All members work towards creating stronger and more dangerous undead monstrosities in order to attack and destroy churches and shrines of Wee Jas.

The Plague Doctors: a cult of doctors that always appear when disease breaks out in the cities, this cult represents the Pestilence aspect of Merihem. This group are usually the most benign of the cults, these members dress up like the plague doctors of old: wearing black robes and white raven masks. They only study the outbreaks of disease and never create epidemics so that they can continue working without distractions.

The Havergast Sanatorium: a cult of alienists and doctors that inflict medical tortures on victims at the Asylum on Merihem's layer in the Abyss, this cult represent the Madness aspect of Merihem.

636th Layer: The Masquerade, The Realm of Merihem[edit]

Despite being deep inside the horror that is the Abyss, the realm of The Red Death is for the most part benign. Those that first get the layer note the gothic feel that the realm carries. It is always nighttime on the realm, an eerie fog hovers over the land. The buildings are like those found on the Material Plane, made of stone and wood, the whole realm is like one large city, the streets lit by candles inside glass boxes on poles. The buildings are inhibited by clerics of Merihem as well as those that remain on the layer. The six greatest clerics of Merihem are called the Lords and they own large castles on the layer. In the middle of the city, lays Havergast Sanatorium, run by the vampire alienist Lord Alistir Havergast. The doctors that work there are all insane, torturing people who were kidnapped from different parts of the Material Plane, all in the name of advancing medical knowledge.

Unlike the other layers where deities and demon lords have towers dedicated to them, Meriham has no such location on his realm. He is always traveling on his layer, a large red mist hidden in the fog. Those that are unfortunate to run into The Red Death can go mad, become diseased, or die and rise up as the undead. Those that become undead look like they did when they were alive, most still believe themselves to be among the living.