You wouldn't be able to tell reading about kneeforged, but they have quite the punch... or kick. 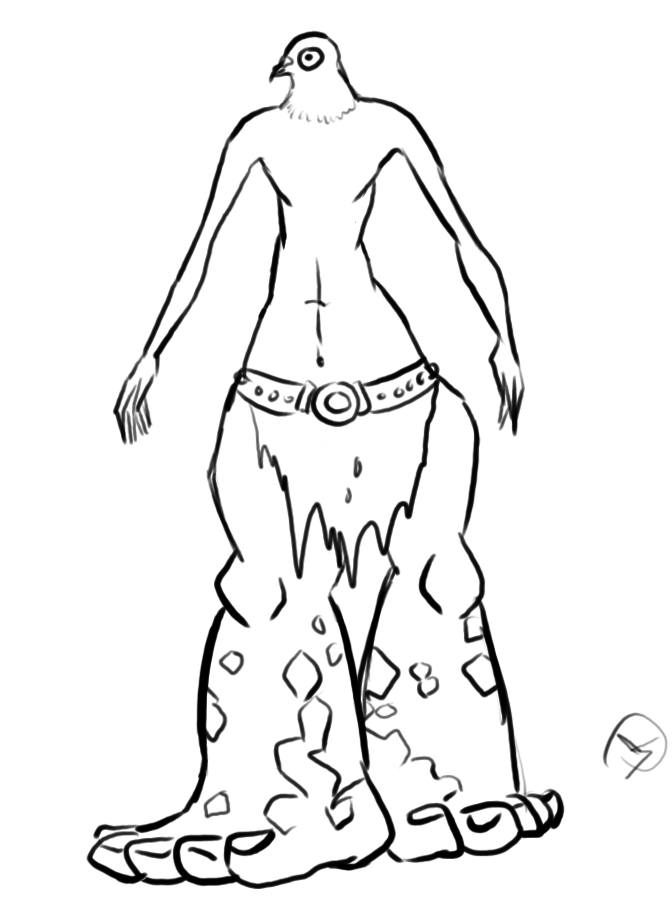 Kneeforged resemble humanoids with avian heads, specifically pigeons. Their upper bodies looks frail and underdeveloped in muscle. However, their lower bodies are another story. Their thighs are incredibly thick, acting as supports and a drum roll to the ridiculous knees kneeforged have. These knees are large knobbed joints with the supposed hardness of iron or even steel, due to their thickness. They resemble scaled human legs, with a naturally armored patella, and scales extending down towards the shin and below. As one could guess, their feet are ginormous. While the upper body has normal human skin and the head has bird feathers, the legs are shades of a swampy grayish green.

The kneeforged are so named because a popular motto in their society is "the knee makes the person." Kneemade was an archaic address they have long discarded, favoring the sound of kneeforged, since it held reminiscences of the waarforged, whom the kneeforged admire. The kneeforged claim they hail from a god similar to what created the kikura'aht. This creator originally was tasked to make birds to serve as fowl for others, the lowest of creatures of the air. He resented this, especially after looking at his dull pigeon creations. Oh how he envied the creators of humanoids and dragons. Thus, when they discarded parts, he ended up taking some aside for his own side project, which came to be the kneeforged. The other gods were both amused and ashamed of his unabashed demeanor as he made these funny creations out of spare parts. They took pity on the odd creatures and let them have a place in their world of creation, alongside that of whatever other fancies the creator races made reality.

The kneeforged live mainly in regions of rocky areas and terrain with difficult outcrops and awkward steppes. Extended periods of living in this terrain would normally wear out the joints of humans and other creatures with normal ligaments and tendons. Kneeforged, however, are extremely hardy in their joints, particularly their legs, allowing them to run longer distances and tire less. Their legs are also lethal weapons that can give severe concussions from a kick. They organize in tribes where the ones with the strongest knees are gathered in the elite group that rules the tribe in a form of oligarchy. To prove their knee's mettle, they participate in a series of grueling competitions meant to test their leg and patella strength. Those who have their legs broken usually never truly recover. They are a race truly forged by their knees.

Despite having pigeon heads, the kneeforged are not total bird brains. They have a sense for rather refined names.

Bird headed humanoids with great knees
Ability Score Increase. Your Constitution score increases by 2.
Age. They are not long lived, usually being elderly by 50.
Alignment. They are playful but usually neutral.
Size. Kneeforged can grow rather tall, like a human. Your size is Medium.
Speed. Your base walking speed is 35 feet.
Powerful Legs. Your legs are incredibly powerful, allowing you to jump and leap far. Your jumping distance is tripled.
Shin Guard. Because of the size of your legs relative the rest of you, they can act like powerful guards due to their hardness when you swing them around like shields in battle. While unarmored, your base Armor Class is 11 + your Constitution modifier. You may use a shield and still gain this benefit.
Surefooted. Your large feet and powerful legs make it hard to knock you down or push you around. You have advantage in saving throws against being knocked prone or moved against your will.
Kick. Your powerful legs are weapons which you can make unarmed strikes with. If you hit with it, you deal bludgeoning damage equal to 1d6 + your Strength modifier.
Trample. In battle, you can throw yourself into a furious rage and stamp enemies to death. As a bonus action, you can make a special attack with your kick. If the attack hits, it deals its normal damage plus extra damage equal to your Constitution modifier. You can't use this trait again until you finish a short or long rest.
Languages. You can read, write and speak in Common.