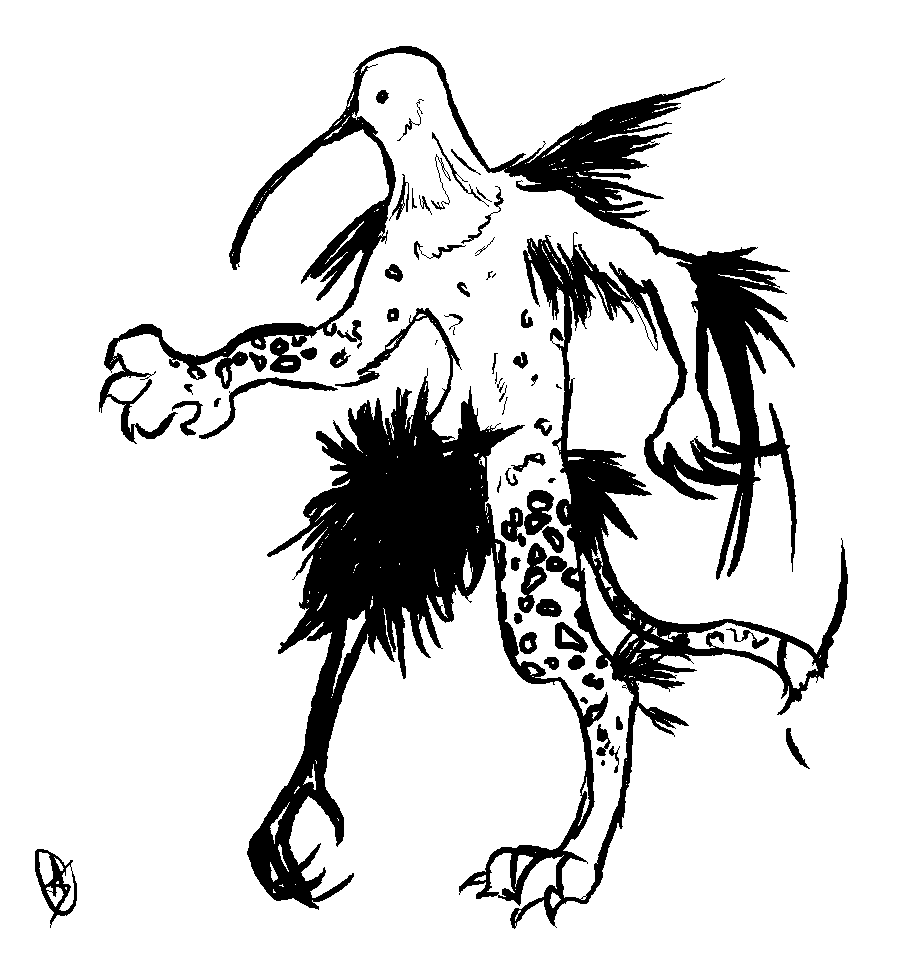 Kikura'aht are odd humanoid creatures without a smidge of human to be seen. Their heads resemble ibis or colorful hummingbirds, with long, curved beaks, and plumage extending down thick, stout necks to their chest. Their body below the neck is a mix of leopard and raven traits, and sometimes panther instead of leopard. Not all kikura'aht have the same ratio or body composition, so some may have more leopard or panther parts, and others, raven. Raven parts are black, shiny feathers with limbs that are usually thick, ridged talons. Panther or leopard parts are covered in patterned fur, with limbs that are wiry and end in retractable claws. Kikura'aht vary in whether they have black raven feather tails or long ropes of feline tails. Kikura'aht usually have shiny black eyes.

The kikura'aht are a race native to the forest of Barrya. However, they are a minority which finds its home in the highest trees despite being flightless. They instead have remarkable climbing ability and reflexes to avoid a speedy death below. Having prehensile hands, they were also very intelligent and used tools like humans to hunt and protect their territories. They are believed to have been created by a demigod of the tropics, which rules over the steamy forests rather than other kinds of lush areas. The god is depicted to have a hummingbird head, which he gave to the kikura'aht as a sign of his creation.

Their main purpose was to guard the forests, particularly the heart, where their main hive is centered. It is to protect an old tree, the supposed last of its kind. Among the branches of the tree bloomed special flowers which could only be hosted and grown on this particular tree. These flowers would bloom to be very large, called theoflora. Despite their size, they bore very small amounts of nectar. This stuff was the treasure which only the kikura'aht knew how to collect and refine. The end product after a long period of pasteurization and fermentation was a sweet treat called Barrya nectar.

This nectar was legendary for being able to rejuvenate armies of men with just a taste. Due to its rarity and incredible utility, many kingdoms tried to take over the Barrya forests and monopolize or control the production of it by enslaving the kikura'aht. The avian humanoids have thus far managed to evade conquest and fought off many power-hungry rulers vying for their prized nectar. However, only time will tell when they may relax.

Kikura'aht live high up in the trees of Barrya. They construct a network of wooden treehouses on platforms which are all connected in a big web, called nests. These nests are usually close to the canopy but still hidden well from eyes in the sky. The trees in these environments can easily reach 200 feet in height due to the age of the forest. Regardless of the daunting height, kikura'aht are well adapted to survive in those heights, despite being flightless. They are hard-working and determined with stamina, allowing them to make several climbing trips a day up and down the trees to construct new houses, layers of nest, and collect materials.

Kikura'aht nests combine into a vast network known as a hive. The main hive of the race's existence is built around the legendary tree of Eriath, on which the flowers of theoflora bloom. It was here the god's feathers created these flowers, and he made the first kikura'aht to be his warriors. Kikura'aht society is very spartan. They often train their bodies in battle and their mind in strategy and tactics. A central council of the strongest and wisest manage individual nest activities. The hive has a larger council with nest councilors as well as generals of the armies.

The nectar which is produced by the theoflora is refined in a recipe said to be passed down from their god, a secret bequeathed to the kikura'aht to be used wisely. Only a few of them know the true process to create the end product of Barrya nectar, and even then, it requires the labor of many kikura'aht. The secret of the nectar is a fiercely guarded secret among their race and they will fight to the death to protect it. It is said to be a sweet substance but also immensely delicious and filling. It can replace one's need of rest and rejuvenate heavy wounds with just a taste, according to legend.

Only a little is ever produced at a time, but it is believed to be an important factor as to why the kikura'aht have been able to resist conquest all this time. With just enough, an army can go marching infinitely. While they remain adamantly protective of its secrets, they do nonetheless trade diminutive amounts of it at ludicrous prices to the richest of the rich. A noble could easily lose his entire fortune for barely half an ounce of the nectar, also dubbed "ambrosia." Due to its delicacy, some say it is cursed; being so delicious that you become addicted after a single taste.

These odd chimerical creatures take names that sound utterly foreign, even in the context of Sylvan and Common. They are usually in two parts, separated by an apostrophe, with no denotation like a first name or surname. Males and females use the same sets of words to form names, which appear to be androgynous.

Chimerical bird-leopard creatures that live high in trees
Ability Score Increase. Your Dexterity score increases by 2, and either your Intelligence or Wisdom score increases by 1.
Age. These odd creatures usually live to be about 230 years old, remaining quite lively and virile til the end thanks to a strong physique.
Alignment. Kikura'aht tend to be lawful, preferring to follow rules and suppress their own "unnecessary" desires in favor of the hive.
Size. Kikura'aht usually are pretty tall compared to the average human. Your size is Medium.
Speed. Your base walking speed is 30 feet. You have a climbing speed of 30 feet.
Darkvision. You can see in dim light within 60 feet of you as if it were bright light, and in darkness as if it were dim light. You can't discern color in darkness, only shades of gray.
Defy Fall. You are flightless but you can still survive in a setting as dangerous as Barrya, where the bridges between houses span chasms of death down to the forest floor. When you fall 50 feet or less you can, as a reaction, instead take no damage.
Forest Prowler. You are greatly familiar with the forest, being able to effectively hide within it, and find nourishment. You have advantage in Wisdom (Survival) checks to forage in forest environments and Dexterity (Stealth) checks to hide when in a forest environment.
Sipper. You are a creature of nature through and through. You are proficient in the Nature skill.
Languages. You can speak, read, and write Common, Sylvan and Auran.

When creating a kikura'aht character, you can use the following table of traits, ideals, bonds and flaws to help flesh out your character. Use these tables in addition to or in place of your background's characteristics.
Kikura'aht are fairly stoic and quiet. Outbursts are considered signs of instability.