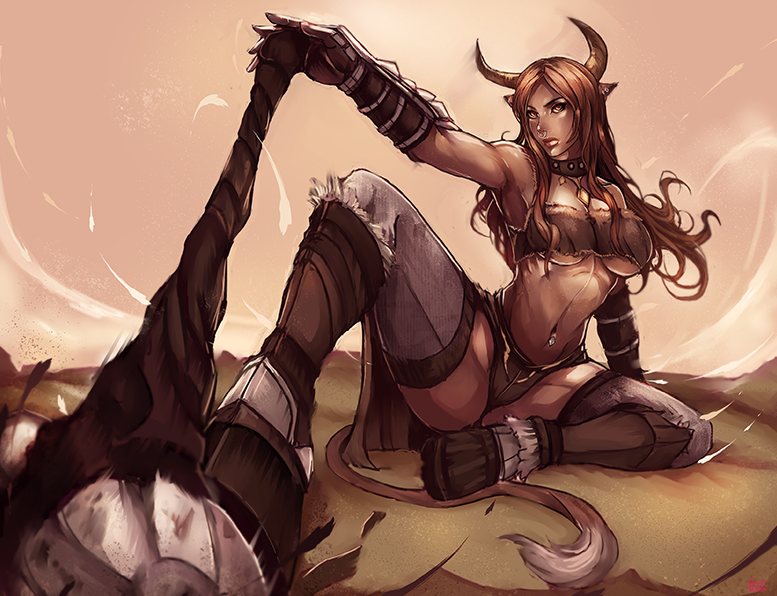 The Kaori have a unique existence in the world, born by the union of both the savage Kerani and civilized Men. Often times, they must question whether to embrace their bestial nature, or their place in civilization... or perhaps, both.

The Kaori are named for the word that describes them in the Kerani language - it means "distant blood", and is sometimes the only acknowledgement that a Kaori receives from their true-blooded kin. They are typically the result of a union between Kerani and Man. Like Half-Elves, they are often subject to a great amount of derision by those who disapprove of such creatures, due to the longstanding enmity between the races of men and the Kerani tribes. On the other hand, those who seek to mend the frayed relations between their two races often look to the Kaori as a living link, and prize them for their unique capability for forging relationships and wordplay.

Due to their lives often requiring the navigation of many minefield of social interactions, many Kaori become naturally capable conversationalists and pacifiers. Still, owing to their human-like versatility, many Kaori forego the passive route in life, and instead heed the call of the more savage ancestors, taking up martial disciplines or attuning themselves with natural forces.

For more information on the individual characteristics and preferences of the Kerani, see the Kaori page.

Abilities: Ability scores vary for the Kaori: much like humans, their varied nature tends to deflect easy categorization. Still, commonly, Kaori tend to have high Constitution and Charisma scores.

All of the following are class features of the Kaori paragon class.

A Kaori paragon is proficient with all simple weapons, and with light armor and shields (except tower shields)..

At 2nd and 3rd level, a Kaori paragon gains new spells per day (and spells known, if applicable) as if they had also gained a level in a spellcasting class they belonged to before adding the level. They do not, however, gain any other benefit a character of that class would have gained (bonus metamagic or item creation feats, etc.). This essentially means that they add the level of Kaori paragon to the level in the spellcasting class, then determines spells per day, spells known, and caster level accordingly.

A Kaori paragon has adopted the gifts of their ancestry, and learned to user their horns in battle, just as the Kerani do. The horns are considered a natural weapon, dealing 1d8 damage plus the Kaori's strength modifier.

At 3rd level, a Kerani paragon’s paragon increases one of the following ability scores by 2 points: Constitution or Charisma.