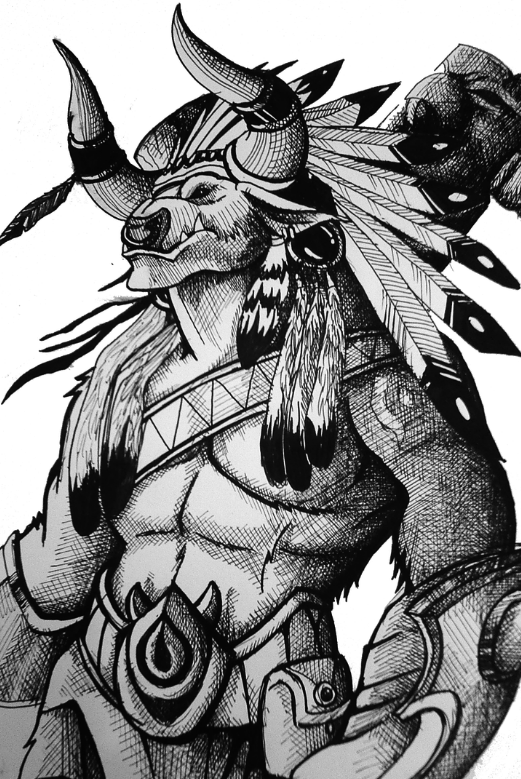 The proud, uncivilized Kerani are known for their size, shape, and power. A race of warriors and shamans, they live among nature and embrace both its perils and bounties.

The Kerani are a tribal, barbaric race of warriors and shamans that are largely located in the plains of Loupe, in the Tirasus or Kerrigan regions. Once called the "unspoiled, self-sufficient great beast-men of the plains", they are often imposing in stature, standing well above most other races and usually having a grand physique, as well. They are creatures of few words, when it comes to outsiders, and instead prefer the close-knit community that they tend to form. Hunters and gatherers, they are renowned as being one with nature.

Given their savage and uncivilized nature, the Kerani have endured many conflicts with the races of men and elves. They are typically prized for their great strength and fortitude as beasts of burden, and many Kerani prisoners have been made slaves for such purposes. While the practice is largely dying out across the more civilized nations, the past has led to a deep-seated mistrust of outsiders among the Kerani, who have since become more reclusive and isolated from civilization.

For more information on the individual characteristics and preferences of the Kerani, see the Kerani page.

Abilities: High Strength and Constitution are the most desirable traits of the Kerani.

All of the following are class features of the Kerani paragon class.

A Kerani paragons gain no proficiency with any weapons or armor.

At 2nd and 3rd level, a Kerani paragon gains new spells per day (and spells known, if applicable) as if they had also gained a level in a divine spellcasting class they belonged to before adding the level. They do not, however, gain any other benefit a character of that class would have gained (bonus metamagic or item creation feats, etc.). This essentially means that they add the level of Kerani paragon to the level in the spellcasting class, then determines spells per day, spells known, and caster level accordingly.

A Kerani paragon continues to progress as if they continued to takes levels in the barbarian class. For the purpose of determining Rage benefits, Rage Dice, Combat Movement and Fast Healing, the Kerani's effective barbarian level is equal to the sum of their barbarian and Kerani paragon class levels.

A Kerani paragon’s racial bonuses on Listen, Search and Spot checks improves to +6.

At 2nd level, a Kerani paragon gains the scent ability.

At 3rd level, a Kerani paragon’s paragon increases one of the following ability scores by 2 points: Strength or Constitution.