Draegloths are demons born of an unholy union between drow high priestesses and demons. Though such couplings are not exactly rare, the birth of a draegloth is a rare event. Draegloth are Lolth's favored, and the exceptional among them often achieve high positions in the priesthood of Lolth. Draegloth often serve as bodyguards for their mothers, though not out of loyalty.

Draegloth brutes, if anything, are even less subtle than other draegloth. Drow often find it hard to impose their will on draegloth brutes, as they rarely listen to orders once in the thick of battle.

Favored ones are much more sophisticated than other, "lesser" draegloth, and are capable of using the sophisticated hit-and-run tactics of the drow. A favored one typically stays away from the front lines, preferring to fight at range with the powers granted to them by Lolth. 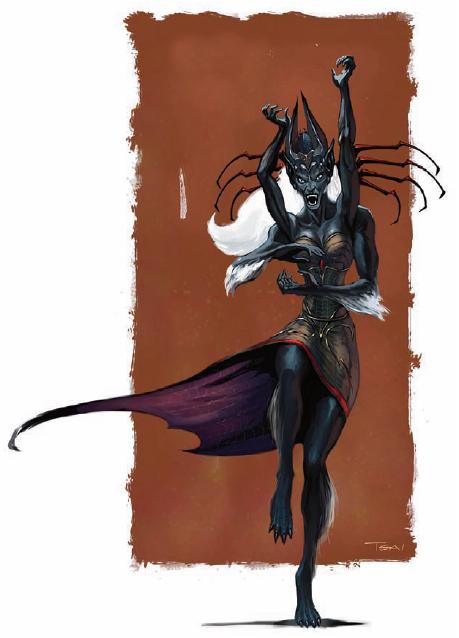 A character knows the following information with a successful arachana, arcana or religion check.

DC 10 (arachana), DC 15 (arcana or Religion): Draegloth are demons born of an unholy union between a drow high priestess and a demon. Such a union rarely produces a child, but sometimes Lolth will bless the drow with a draegloth son or daughter. Draegloth usually follow their mothers around, acting as bodyguards, but they are perfectly happy to execute a well-timed betrayal.
DC 15 (arachana), DC 20 (arcana or Religion): Rarely, a draegloth may be born with greater intellect and charisma than its lesser brethren. Such draegloth are called favored ones, and are trained to be clerics of Lolth. Favored ones often achieve high positions in the priesthood of Lolth.
DC 20 (arachana), DC 25 (arcana or Religion): A draegloth is born when a priestess performs a special ritual to enable mating with a demon. This ritual is secret and only given to high priestesses. Even with this ritual, the birth of a draegloth is rare.

Draegloth are often included in drow patrols, along with tamed spiders, driders and slave soldiers.

Below are some feats available to draegloths.

You can use the innate drow powers of darkfire and cloud of darkness.

Benefit: You can use Darkfire and Cloud of Darkness as Lolthtouched racial powers.

Your claws are infused with arachane power.

Benefit: Your claw attack has a damage die of 1d8 rather than 1d6.

Your fangs are infused with arachane power.

Benefit: When you make a melee attack with your claw attack and reduce the target's hit points to their bloodied value or less, you can make a melee basic attack a free action. This attack has a proficiency bonus of +2 and a damage die of 1d6

A female drow who knows the Dark Gift of Lolth ritual can attempt to conceive a draegloth by using this profane ritual.

This profane ritual enables mating with a demon.

You summon a demon from the Demonweb, and this ritual enables mating with that demon. Your Arachana or Religion check (your choice which) determines the effect of this ritual. If you use a Religion check, you take a -5 penalty to the roll.

If you conceive a draegloth, the gestation period is 10 months.