Arrogant and perverse, the drow conspire to subjugate all who don’t revere their Spider Queen, the god Lolth.

Like their kin, the elves, drow were once creatures of the Feywild. However, they followed Lolth down a sinister path and now reside in the Underdark of the world. There they gather in settlements of macabre splendor, lit by luminescent flora and magic, and crawling with spiders.

The drow are feared and reviled throughout the Underdark and on the surface above, and for good reason. Drow are the evilest race in existence; they are cruel, devious and treacherous. The drow would do almost anything to gain more power.

The eternal game of advancement which the vast majority of the drow are embroiled in has transformed them into schemers and knifing backstabbers. This attitude is encouraged by the spider queen Lolth who enjoys the dark elves’ plotting.

The drow adventurer uses darkfire on an enemy, and uses its hand crossbow to assail an enemy from a distance, using mobile melee attack to retreat or move to a more advantageous position if its enemies close the distance.

The drow arachnomancer stays behind its enemies, using cloud of darkness to protect it from adversaries. It summons swarms of spiders to engulf multiple enemies, using toxic bolt once its powers are expended.

The drow blademaster uses its mobility to outflank foes, using whirling riposte against enemies that it passes. It uses cloud of darkness to strike foes from unexpected locations, and focuses on a single enemy if possible.

The drow priestess remains in the midst of several spiderkind allies, granting them the benefits of Lolth's Authority. She attacks aggressively, using Lolth's Fury to attack multiple foes at once, and flees under the cover of cloud of darkness, and several slaves if the battle turns against her.

The spider bound warrior faces its foes openly, using spiderbound shield to create a spider minion to aid it in battle or to flank as necessary. It uses lolthtouched powers to gain the upper hand in melee, fleeing under cover of cloud of darkness if necessary.

The spider bound warrior faces its foes openly, using lolthtouched powers to gain the upper hand in melee, fleeing under cover of cloud of darkness if necessary. It uses riposte to counterstrike against enemy attacks. 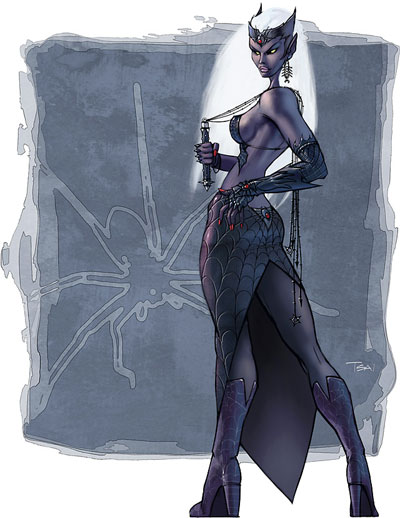 A Drow Priestess, by Francis Tsai

The drow matriarch remains in the midst of several spiderkind allies, granting them the benefits of Lolth's Authority. She attacks aggressively, using Lolth's Fury to attack multiple foes at once, alongside toxic bolt, and flees under the cover of cloud of darkness, and several slaves if the battle turns against her. She summons a wave of spiders as regulaly as possible, sustaining a spider of the great web as long as possible.

A character knows the following information about drow with a successful arachana or arcana check.

DC 15 (Arachana) DC 20 (Arcana): Drow raid the surface as well as other Underdark societies for plunder and slaves. They conquer the weak and form tenuous alliances with creatures powerful enough to stand against them.
DC 20 (Arachana) DC 25 (Arcana): Drow live in a matriarchal theocracy with rules and customs strictly enforced by the priests of Lolth. Male drow can’t serve as clergy and are often treated as secondclass citizens, but even they exercise power based on their station and the opportunities handed to them.

Drow patrols often include one or more trained spiders. Drow expeditions, raiding parties, and armies have large numbers of enslaved nondrow among them, as servants and soldiers. Drow also form alliances with devils and demons.