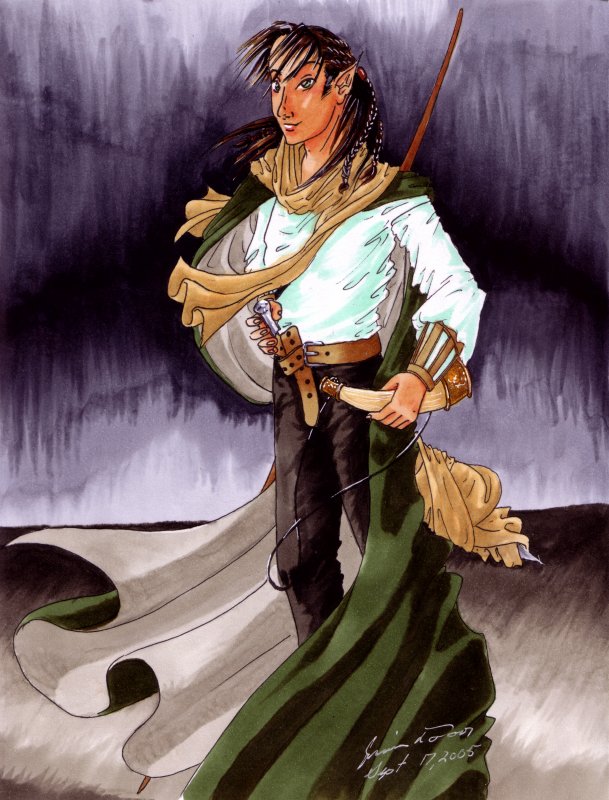 Douie Solitude is the leader of the infamous band Douie Solitude & The Solitude Seven. He follows military units and talented adventurers around, all the while using greater invisibility to keep himself hidden, and relays the stories he witnesses in his music. His tales of epic battles, righteous warriors, cunning tricksters, and arcane magi have become hits across the known world, and made him a very rich and beloved performer.

Douie was born to Rhibral Solace and Dillphor Solitude III in the elven village of Shadzir, on the outskirts of Finlay. His mother was the head herbologist while his father was an enlisted man (and later Captain) within the Ranger Guard Unit stationed at the border.

Douie is one of seven children and was the fourth child of the Solitude Clan, the others being (in order of age) Dillphor IV, Darnioal, Deborah, Dilvor, Drestina, and Destiny. He was very close to his younger brother Dilvor growing up, and the two loved to explore the woods of their father's land.

Like most of the youth in Shadzir, Douie attended the Shad Academy for his entire schooling period. He followed in his older sibling's steps and enrolled in Quarts School of the Arts, however his tenure would be short.

Through a chance encounter, Douie met guitarist Alezander Duncan on the campus of Quarts. The two instantly found a bond and Douie was amazed at the musical world Alezander brought him into. Douie immediately changed his major and entire class schedule and shifted to the School of Music on Quarts where he found he had a natural talent.

His enjoyment with the system would not last however. Douie quickly learned that he did not agree with the Music Theory taught to him, and wanted to express music without analyzing it. For this reason, he left Quarts after only five weeks of attendance. This decision cut him off from his parents where he was not welcomed.

Douie, both of his own wishes and the recent loss of home, struck out on the road shortly after this time. He spent the next three decades exploring across the land, but, other than that, not much is known. Since his rise to fame, stories of people remembering him passing thru have come out. Some are as simple as recalling a traveler who wooed a lady for an evening, and others are more lavish as an elven dragon slayer.

What is known is primarily found on Douie's first published musical sheets, of which the collection is known as Tomorrow's Road: Finding Solitude.

Shortly after the release of Tomorrow's Road, Douie found himself being more recognized along his travels. He was introduced to more noble individuals and found himself being invited to Royal Courts to perform. It was here that his legend quickly spread and he began to be requested the world over.

However, Douie refused to perform exclusively for Nobles. He enjoyed all people, of all social classes, and performed for them all. His stories of adventurers and wars and the dark corners of the world thrilled all his audience, and he quickly became a beloved idol.

As his musical ability and renown grew, Douie discovered the need to have bandmates so that he could develop a more fulfilling sound for his music. This sparked a journey home of sorts for him as Douie returned to Finlay to find his old friend Alezander Duncan to enlist his service. He visited his home for a short period to see his family. Though the meeting has been described by those close to the Solitudes, not much has been said other than Douie and his father made amends but it wasn't easy. Alexander and Douie would spend the next few years spanning the globe enlisting other renowned musicians into their new band. This band would become known as Douie Solitude & The Solitude Seven.

Douie and his entourage have found a variable schedule which allows them to hit most major settlements at least once every three years, with a couple of places hit at set times each year. When Douie and the Gang come to town, fathers and husbands lock up women (while a few mothers and wives lock up their men due to Sweet & Legs) and the town goes crazy.