"Your civilization is on the brink of collapse Human. My people are all too familiar with this." 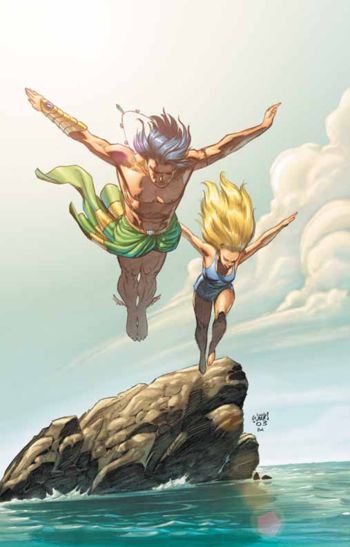 Citizens of an ancient empire that sank beneath the ocean, the atlantean adapted to their new home and now adventure both at sea and on land. A proud people who hold personal honor in high regard, the atlanteans can be found anywhere from the coastlines (predominately in Human-led populations) to the deepest trenches of the ocean floor.

Atlanteans are little different from humans in appearance. They usually stand from 5 feet to a little over 6 feet in height and weigh from 125 to 250 pounds. Men are noticeably taller and heavier than women. Atlantean coloration tends toward very pale, almost bluish skin to a lighter tan pigmentation (though one anomaly is known of), with blue and green eye and hair that ranges between a light brown to a very pale blonde.

Atlantean dress is very plain and sparse with most wearing just enought to maintain their modesty (and some less than that). This light clothing attire allows them to move about more in their aquatic settlements. They are fond of pearls and soft metals that can be worked without heat, such as gold. Atlanteans, like humans, reach adulthood at about age 15 and rarely live more than a century.

If you're looking for a race that is totally at home beneath the waves, while also being able to withhold their own on land, then the Atlantean is the race for you.

Most atlantean adventurers undertake missions on behalf of their family or atlantean community - reestablishing connections among the widely scattered settlements of the race, fighting bitter blood feuds against rival families, or rediscovering lore lost in the great cataclysm that transformed the race.

Though rare, there can be found the sparse atlantean adventurer who is more independent. There's a long tradition in atlantean society - a cultural safety valve of sorts - where atlanteans who don't fit in choose a period of self-exile, during which they wander the seas. Your character might have chafed at the bounds of regimented society, choosing exile rather than a stifled life among your people. Or maybe it wasn't voluntary; a real or trumped-up crime or conflict might have resulted in your exile. Whether you seek to regain your place in atlantean society or forge a new destiny for yourself is up to you.

Taken as a whole, atlanteans are as likely to become adventurers as any other race, though land folk rarely hear of their exploits. Many atlantean adventurers perform mighty exploits below the waves but only rarely venture out of the sea. Those who undertake those adventurers that lead them out of the ocean are likely to find fellow adventurers who are more familiar with the surface world.

Even though you have a swimm speed, it's still a good idea to spend points on the Swim skill. Doing so will help you when you're facing undersea hazards and when you're wearing heavy armor. If you're a spellcaster, you'll want to know every spell in the Player's Handbook with the water descriptor.

Atlanteans keep the names they are given at birth, even after marriage. When among other races, atanteans do not give their family names, instead taking the name of their settlement as a substitute surname (example: Damien of Talara instead of Damien Dobson). Given names among atlanteans always begin with consonants, while family names typically begin with vowel sounds (though this is not across the board, irregularities do exist). 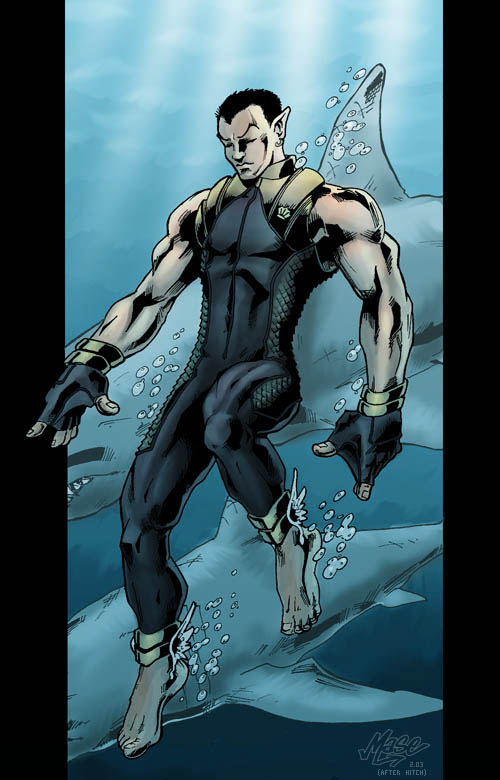 As an atlantean, you're exotic both physically and culturally. You're able to traverse the boundary between the worlds of sea and air - a boundary that most find impassible. You're from a culture with a rich, tragic history that few human nations can match. You carry the weight of your people's honor and heritage on your shoulders, a mixture of pride and sorrow not unlike that of a samurai after Japan's feudal age drew to a close.

Atlanteans are, first and foremost, a very devout people. They literally owe their existence to their patron sea goddess, after all. Atlanteans are also a very proud people, sometimes to the extent of being considered prickly about things such as their honor. They are not quick to take insult, but they are very particular about their own honorable behavior. They expect less out of other races, though are pleasantly surprised when on of the land folk matches their standards for honor, courtesy, and duty.

Atlantean culture is very tradition-bound and ordered. This sense of tradition is expressed among the atlanteans as the Twelve Virtues: honor, loyalty, bravery, piety, civility, strength, perseverance, dedication, humility, obligation (specifically to the family), respect, and peacefulness. Of course, these are ideals to which individual atlanteans strive, but the assumption of these virtues as being the norm colors everyday atlantean life.

Atlantean culture is regimented enough that even rebels, misfits, exiles, and other adventurers tend to go about their daily routines in an organized, mindful fashion. Devout atlanteans undertake many small rituals of thanks and acknowledgement through their day, and nearly every atlantean recites his or her lineage before going to sleep each night (even those who can't stand their families).

Roleplaying Application: During your adventuring, think about small, repetitive tasks you can turn into rituals. Perhaps you sharpen the tines on your trident after every battle, then look in every direction for enemies, then examine the bodies of fallen foes.

Atlanteans speak Common, as well as those of the civilizations around them. Many Elven words have found their way into the atlantean Common, due to the influence of the aquatic elves on atlantean civilization. Additionally, many atlanteans learn the Aquan tongue, often with a merfolk accent.

Roleplaying Application: Because atlanteans spend most of their lives underwater, they use idioms and expressions that humans find puzzling - and some phrases are baffling to atlanteans as well. The phrase "fight fire with fire" and "every cloud has a silver lining" are probably meaningless to atlanteans, who might instead use the equivalent phrases "sometimes you must wrestle the octopus" and "even the smallest oyster can hold a pearl".

Long ago in the misty dawn of humankind, the mighty island nation of Atlantis rules the waves. The patron of this nation was a goddess of the sea, and it was only by this goddess's graces that the atlanteans exist today, for a terrible cataclysm befell the island nation. Some say that cataclysm was the working of a god who was the sea goddess's rival, while others claim that it was the result of the nation's own toying with terrible magics.

Regardless of the cause, Atlantis was laid low by the cataclysm and the island nation sank beneath the waves. Though the sea goddess wasn't able to save the island, he transformed its people into the atlanteans, humans capable of breathing water.

Now atlanteans emerge from the sea only occasionally, for they are an insular people. In many cases, those who meet atlanteans do not know that they are dealing with a sea-dwelling creature, for the atlanteans do not look drastically different from humans and can easily pass for one in most cases. Those atlanteans who need to venture onto the surface world simple do so, engage in whatever tradng they might need, and then go their way with few being any the wiser.

Respectful of tradition and personal honor, atlanteans tend to be lawful. Atlanteans do not have any need for stringent legal codes and expansive laws. Each member of their society is assumed to act with honor and integrity, seeking the best outcome for the most people. Dishonorable behavior is dealt with one a familial level - a family is expected to deal appropriately with anyone in their midst whose behavior reflects badly on the community, whether through shaming them into proper behavior or ensuring that this family member makes amends and then keeping a close eye on him or her to prevent such behavior again.

Most atlanteans know the place where their original homeland sank beneath the waves. However, a generation or so after their transformation they were forced to abandon it. Some say it was because disease spread among them, while others claim that the sahuagin armies of a mighty kraken lord claimed the great city.

Currently, atlanteans live in small enclaves of up to a thousand members. Each enclave is rules by a king, who is often a paladin or cleric of the sea goddess. Once a decade, the kings of all the settlements gather for a Royal Moot hosted by one of the kings, wherein the kings reaffirm their treaties and alliances with one another.

Most atlanteans revere the mighty sea goddess Aqualira as their patron and savior, for it was by her hands that they did not perish in the long-ago catastrophe that befell their kingdom. The temple hierarchy of Aqualira is a pillar of any atlantean community, and high priests often serve as the principal advisors to atlantean kings and lords. Evil atlanteans are sometimes lured by the promises and power offered by the half-brother of Aqualira, the evil Rymir, known as the Tide Bringer.

Atlanteans have excellent relations with merfolk, aquatic elves, and tritons, often banding together with them to fight off threats from land folk or aquatic threats. They are fascinated by the merfolk and their culture's apparent lack of structure, so unlike the atlantean way. Atlanteans are dedicated enemies of the sahuagin and monstrous sea creatures such as merrows and scrags.

Of all the sea-dwelling folk, the atlanteans are the most likely to engage in regular commerce and trade with coastal and seafaring land dwellers. Sometimes they conceal their true origins from humans they deal with, appearing as mysterious sea traders who rarely venture far from the ocean. In other places atlantean kings are staunch allies of human lords ruling over coastal cities, and the two races freely mix. Human-atlantean marriages are not uncommon in such places; the children of these unions are atlantean, although they might have features and coloration that are quite unusual for their race.

Adventurers that involve both the air-breathing and water-breathing worlds often involve atlanteans. And when you need to use the plot device of an ancient culture with long-lost magic lore, consider a culture whose ruins lie below the waves, not below the ground.

A few ideas include:

Atlanteans are chaotic in nature, and are not prone to the roles of Paladin or Cleric. Classes such as Ranger, Druid, Fighter, or Bard may work best. 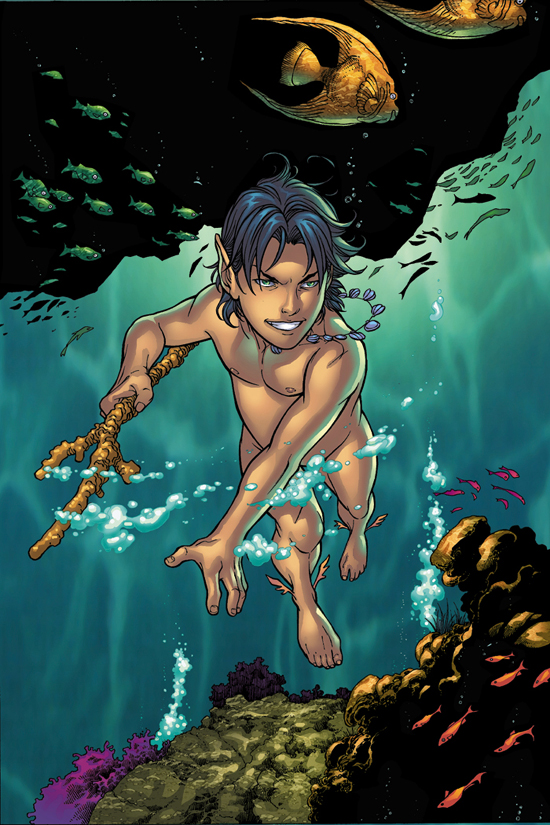