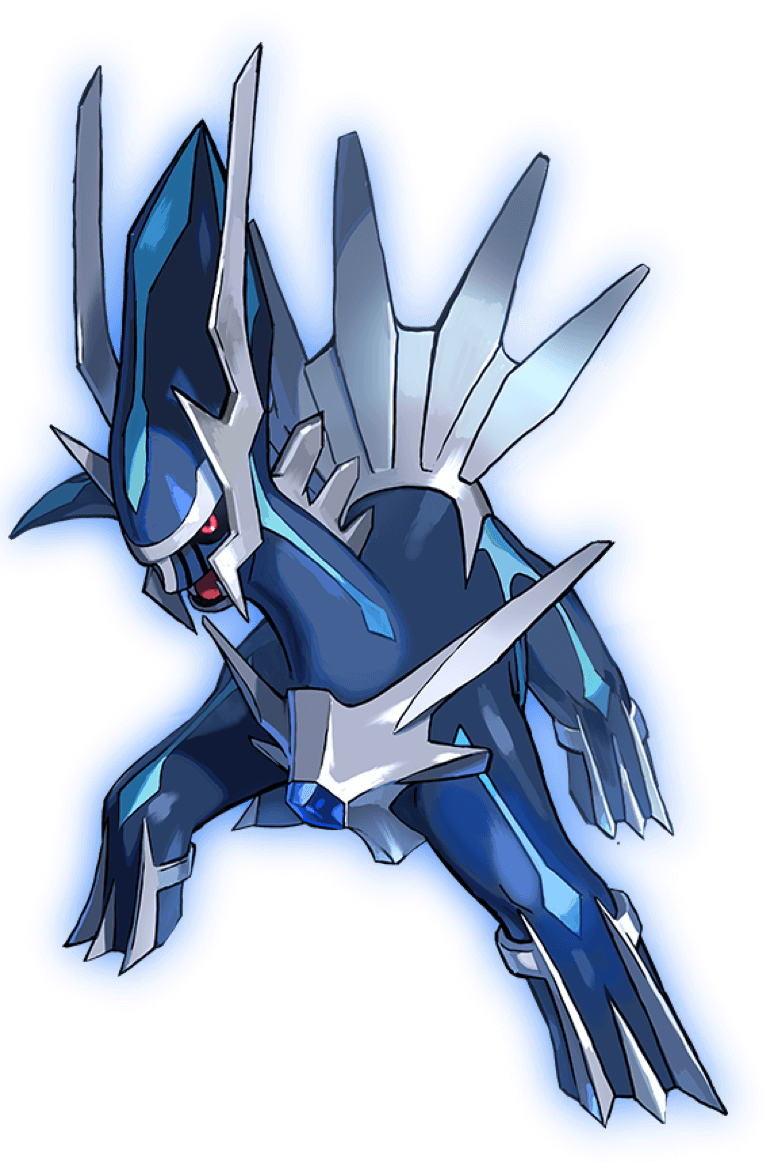 Dialga is the son of Arceus, the creator. It is said that time only began when Dialga was created. With time, life could be born anew and age and die. Like his father, Dialga also has some creation powers. His mighty roar is said to be able to undo time or shred it and anything that happened within it to oblivion. If one were to near him, time seemed to move differently. A step forward may never have happened, or you begin back where you started. Dialga largely simply peruses without much desire or hatred for most of creation. However, he is known to abhor his sibling, Palkia, to such an extent that if they met, time and space would be destroyed due to their cataclysmic fighting.

Dialga resides in a space where time is said to flow from, supposedly near the shell of the egg from whence her hatched. It is here he created the Celebi, who circulate through the realms, making sure there is only one at a time. When one dies, another will replace it. Dialga is also known to venture out to the Material Realm or even into the domain of his brother Palkia. Places which worship Dialga often are country areas where mythos thrives, and modernity is kept at bay. Dialga has about equivalent representation in statues as Palkia does. In the Sinnoh region, it is not uncommon to find one town that worships Dialga and another which worships Palkia.

Dialga is a dark blue sauropod-like pokémon with some gray metallic portions, such as its chestplate. This metal is said to be the hardest material in existence. The plate on its chest showcases a gem in the center. People allege it to be a diamond. When Dialga readies its powers, the gem is said to be a source of its power. It also has various light blue stripes. It has a fin-like structure on its back and a crest on its head, resembling a dinosaur. The fin-like thing is said to be a single wing with which Dialga can focus the flow of time. Dialga also has two horns on top of its head, two fang-like horns on the side of its mouth, and three spines on the back of its neck. It has three claws on each foot of the same metallic looks as its chestplate. Faint cracks exist across its body, said to expose the element of time in his veins.

Those who worship Dialga contest time to be ultimate everything. It supersedes space. Clerics or paladins of Dialga understand the importance of change and the flow of time to be natural. Time is a precious thing which allows life but also death. Worship centers of Dialga often have a diamond as their sacred stone. It is said that the hardest of all diamonds is the Adamant Orb, which allows for the augmentation of Dialga's powers.

When Dialga and Palkia meet, it is to be the end of the world. Space will degenerate and time will cease to flow naturally. However, the only hope for creation then is to summon the three deities of the lake, who have the power to calm the great beasts.