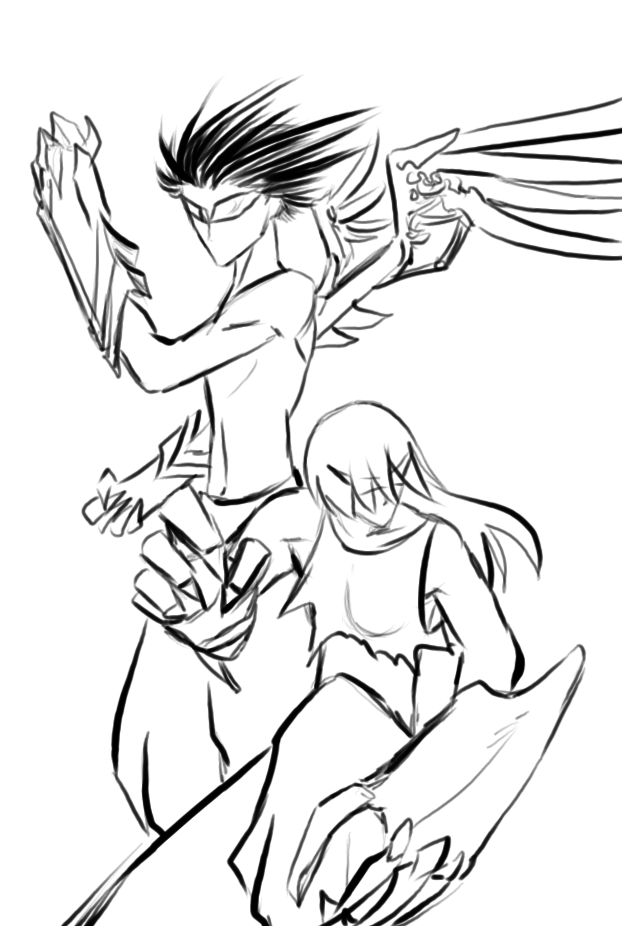 Devil gears resemble androgynous humanoids, with colorful mechanical claws and pale skin. Their hair can vary of many colors, as can their eyes and claws and other pigments. Their clothing is often sparse to be flexible. Colorful glass visors cover their eyes, giving them a strange facial structure. These visors are transparent and are thought to help devil gears see better in the bowels of never-ending flame and darkness. If one looks closely, their joints are much like a puppet or mannequins ball-and-socket joint.

Their sizes can range from short human heights to those at the taller end, up to almost 8 feet, with a wide variety of musculature. It is sometimes disconcerting to see one so large due to them always looking quite young and vital. At a glance, their face is like any other human child or teenagers.

Devil gears are artificial creatures made from a realm beyond this one. Using the bones of those who perished in the afterlife, porcelain skin and mechanical structure was constructed like nothing the living world had ever seen. Metal, tamed by the fires of the Hellish Forges, made sturdy frames of these creatures, who were distributed as soon as they were made to be slaves, the lowest caste of employees in the Underworld.

Devil gears are somewhat produced workers whose invention was first conceived by an alleged genius holed up by the Hell Judge Enma. The madman was forced to work day and night to right what wrongs he had made to spread chaos amongst humans. He conceived of the gears as his vindication, saying they would work all his sins off his back through service to others in the Underworld. While his blueprints were taken to be used, he never got his freedom. To this day, he works alongside grumbling gremlins and lesser fiends in the workshops of the Forges. Day in and out, they smelt and fashion devil gears painstakingly. These constructs are not to be taken for mass produced slaves. Each one requires dainty work and uniqueness. It just so happens they were usually commissioned by greater fiends for work, rather than being a public resource, though many do work within the bureaucracy down below.

Devil gears are not without sentience. Though their second nature is to obey their designated masters, they are often given autonomy in their colony, A'Lacht'um, in the Underworld, where they live in an area akin to a vibrant slum. The name supposed comes from a corrupted word for laughter, supposedly meaning to laugh despite ones abysmal situations. There, buildings are built like haphazard blocks stacked atop one another, with little more than space for a body inside. Devil gears, sometimes simply called 'dears,' form close knitted communities within this slum, and often consider each other family members, as they are all spawned by the same makers.

Sometimes devil gears live with their masters or employers instead. These gears tend to be more snobbish or, in some cases, brainwashed. They do not connect with their fellow devil gears and are much more involved in the matters of their masters. It is a common practice that when these masters convene, they will leave their devil gears be together, similar to how one locks pets next to one another in kennels.

Devil gears are capable of self-expression and emotion, as well as a cultural appreciation for the arts and humanities. Paintings alike to caveman times have been found on the walls of their tiny dwellings. They have an affinity for beautiful attires which usually are not afforded to them. Some paint their claws to appear of higher class or mimic designs they like from clothes.

The arts of devil gears remain rudimentary, including their food. They do not truly require sustenance like food or drink but try to mimic other races culinary fashions out of curiosity and the desire for escapism. It is supposedly a core value to laugh at ones lowest luck, but it is necessary to conjure a reason to laugh, and that usually means they have to trick themselves. They are curious and like to experiment with such things like arts and food, which gives them reprieve in their times away from their work as slaves.

Devil gears are the slaves of workers of the Underworld, and so are often kept in the Underworld to serve Reapers and fiends for menial tasks and such. It is not uncommon, however, for them to be sent on errands out to the material realm of the living in Faerun, where they may often loiter and observe other inhabitants before duly returning home. People have been reported to see them fleeing from any interaction, being rather shy. They are known to observe more than say hello.

Some records indicate these creatures may have once had a group escape to the World Above, where they live in hiding. Given the devil gear's affinity for curiosity and adventure, it is not unlikely they number among the adventurers of the world today, blended in.

Devil gears are often named once made/borne and sold, keeping their branded name for the rest of their lives unless their master says otherwise.

Mechanical servants born and bred in the Underworld
Ability Score Increase. Your Dexterity score increases by 2
Age. After construction, devil gears cease to age in appearance and do not die of age.
Alignment. Devil gears tend to be usually good or neutral. Few are evil, and even then, can only be chaotic, save the rogue personality types.
Size. They can vary from just over 4 feet to almost 6 feet tall. Your size is Medium.
Speed. Your base walking speed is 30 feet.
Darkvision. You can see in dim light within 60 feet of you as if it were bright light, and in darkness as if it were dim light. You can't discern color in darkness, only shades of gray.
Eye Protection. Devil gears have protective coverings over their eyes that protect them from effects that would inhibit their vision. You have advantage against saving throws that would blinded you.
Living Construct. As a construct you do not need to eat or breathe, but you can ingest food and drink if you wish. Instead of sleeping, you enter an inactive state for 4 hours each day. You do not dream in this state; you are fully aware of your surroundings and notice approaching enemies and other events as normal.
Bladed Arm. As a devil gear you can change from normal arms to bladed arms as a bonus action. On a successful hit, they deal 1d6 slashing damage. Also after one attack is made with your bladed hand you can follow up with a second attack as a bonus action. You do not add your proficiency bonus to the attack roll for this attack.
Languages. You can speak, read and write Common, Abyssal, and Infernal.
Subrace. Pick one from Climber or Flyer.

Climber Devil Gears have heavier set claw gauntlets, allowing them to effectively grip and swing when climbing surfaces. They are typically stockier in description and build, built for hard labor.

Ability Score Increase. Your Constitution increases by 1.
Apt Grip. You have a climbing speed of 30 feet.
Skilled Laborer. You are proficient with one Artisan's Tool Set.

Flyer Devil Gears are lithe and meant to mainly play roles of messengers. This allows them more exposure to different environments. As a result, they are not stronger, but more cultured and curious.

Ability Score Increase. Your Charisma increases by 1.
Wings. You have a pair of unwieldy wings on your back. You have a flying speed of 15 feet.
Scout's Memory. You can accurately recall anything you have seen or heard within the last month.

When creating a Devil Gear character, you can use the following table) of traits, ideals, bonds and flaws to help flesh out your character. Use these tables in addition to or in place of your background's characteristics.