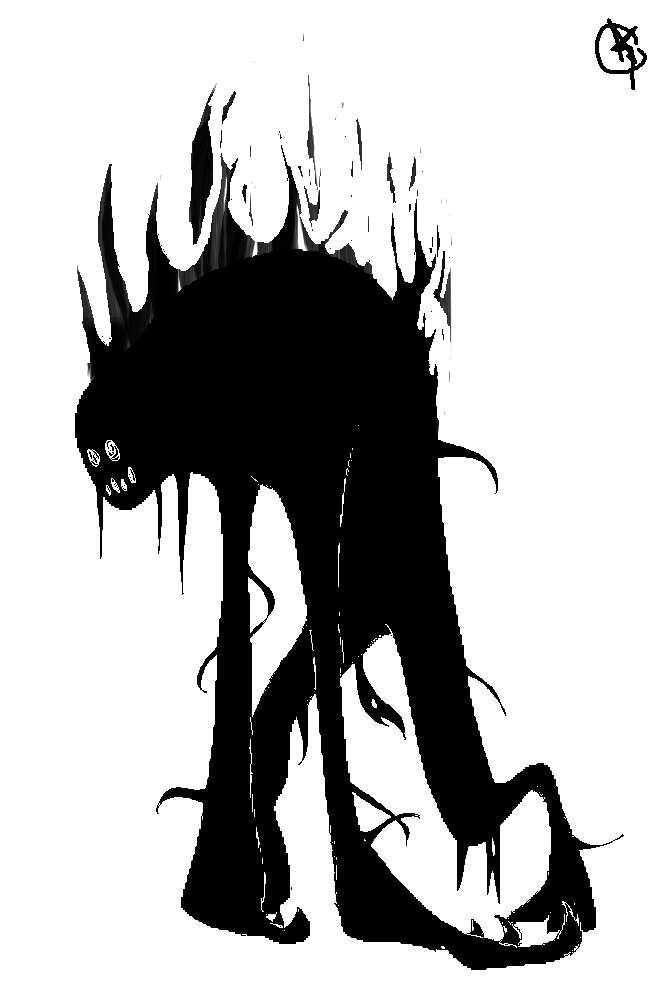 Dark Aberrations are tall, dark beings. Their bodies lack a definitive neck, with their torso simply narrowing out to a small, round head. The face is very simple, with swirling white voids for eyes, and segmented sections of white as its mouth. It is a pitch black creature, and those who touch it recall the texture of stretched satin or velvet, being very smooth. They walk with hunched backs and drag their long, three-fingered arms on the floor. Wisps of dark energy, as well as what looks like strips of dark cloth, emit from their bodies like a shrouding raiment. They are capable of speech and expressions, having very deep, throaty voices.

Dark aberrations were summoned to the world as a result of combined efforts between the forces of dark magic. Since the near sundering of the barrier between the Underdark and Shadowfell, the portals between were kept fairly in check. A group of powerful magic users maintained the barriers where irrevocable cracks lingered. However, the whispers of the shadows infected a few, along with encroaching dark forces on this side of the barrier, intent on releasing chaos from the world of darkness. They murdered the gatekeepers on their shift and broke open one of the cracks. Like they warn about cracks in pottery, the crack spread and released the dark aberrations. These creatures, lurkers mainly at the fringe of Shadowfell, were not grateful to their saviors and wounded many of them before fleeing and spreading through the Underdark, where they are said to live till today.

Dark aberrations live in groups called shades, where they roil about one another, making thee illusion of one dark mass. Alone, they are weak, but together, they pose danger to even skilled adventuring groups. People have mistaken them for shadows, but they are quite material in comparison. They rove about the depths of the Underdark, mainly avoiding the illithids and other denizens of the darkness down there. Unlike other creatures of darkness like shadows or shadow fiends, dark aberrations are just barely adverse to light, as they are not shadow. Thus, they do often raid the settlements of other races from late day till dawn.

Dark aberrations take names which sound very ominous. They are curiously intelligent and are capable of symbolism. They do not grasp the concept of sex and gender inherently.

Tall beings like darkness materialized
Ability Score Increase. Your Dexterity score increases by 2, and your Charisma score increases by 1.
Age. Dark aberrations do not age and they look the same from the day they are made to the day they die. Most live up to 500 years.
Alignment. Dark aberrations have known to be all alignments.
Size. All dark aberrations are known to generally be between 4 and 7 feet tall. Your size is Medium.
Speed. Your base walking speed is 30 feet.
Darkvision. You can see in dim light within 60 feet of you as if it were bright light, and in darkness as if it were dim light. You can't discern color in darkness, only shades of gray.
Amorphous. Dark aberrations are extremely flexible and limber. You can move through a space as narrow as 1 foot without squeezing, any items that cannot fit through a space you pass through are left behind. You have advantage on checks made to escape a grappled against creatures the same size as you and typical restraints can't hold you. In addition, you can don or doff armor as an action.
Shadow Step. In the dark, you can move like a blink. On your turn, if you haven't moved and you are in darkness, you can use your bonus action to teleport 20 feet to an unoccupied space you can see. If you do so, you can't benefit from any bonus to your speed until the end of your turn.
Dark Infusion. You draw strength from the dark. When in darkness, you may expend a bonus action to draw in the essence of it. You regain hit points equal to your Charisma modifier. You do not gain points over your maximum with this trait. You must finish a short or long rest before using this trait again.
Languages. You can speak, read and write Common and Abyssal.