A distraught man trudges through the city streets with his head low. Never before has he been so devastated in his life. All he longed for was to escape and never look back at the bitter world that was after him. After walking for what seemed like hours, he finally arrived at his favorite resting place: a large oak tree with a leafy canopy that covered him from the blistering heat of the summer. He sat under the tree and eagerly flipped open his book. The birds softly whistling and the breeze shaking the trees never failed to calm his nerves. Hours went by before he noticed how long he sat under the tree. He finally looked up from his pages hours later, only to notice a small brown bird eventually in his peripheral vision. Its tweets and chirps gradually sounded like Common rather than normal bird sounds.

"Why the long face?" The bird suddenly spoke. The man jumped, startled by what he just heard. He looked around to figure out where the voice came from, violently swiveling his head in a panicked confusion. "Up here, silly!" The brown bird teased. The man looked up to see that the bird played a trick on him, flying to the tree's canopy faster than his eyes could follow.

"Did you just...speak to me?" The man questioned. He felt deranged for speaking to a bird, but he wanted a definitive answer. The brown bird tweeted in a syncopated rhythm, almost as if it was laughing.

"Look around! We live in a world of magic. Anything's possible!" The bird grinned from its small gray beak. The man started to breathe heavily, almost as if the bird speaking was his confirmation that he was going insane. "Anyway, why are you so sad? Usually, when I see you at this tree, you're so calm and at ease."

"I'm sorry if I seemed rude. I appreciate you wanting to help me, I really do, but...it's kind of embarrassing, and-"

"Fine!...I, uh...got fired from my job as a blacksmith and dumped by my fiancée, all on the same day!" The man slowly revealed. "Not only that, I spent all the gold pieces I had on this engagement ring." The man pulled out a small box with a stunning diamond ring inside. The brown bird stood silent for a moment.

"Cheer up, buddy! Things like that happen! That's what makes life interesting!" The man wasn't convinced. "Just sell the ring and use the money to buy yourself a big meal! Then you can eat your problems away!" The man gave the brown bird a look of frustration. It cheeped jokingly. "Nah, I'm kidding. You just gotta be like me and my kin. Don't let things get to you! Be free and live life to the fullest!" After processing everything, the man burst into a fit of laughter and wiped his tears away.

"Hey, thanks...I appreciate the optimism," the man sniffed, trying to rid himself of the mucus that formed while he was crying. "Wanna read this book with me? It's pretty good." The man raised his book up so that the bird could see the cover from its branch.

"I'd love to." The bird chirped, flapping his wings and landing on the man's left shoulder. They sat under the tree for the rest of the day, finishing the book in one sitting. 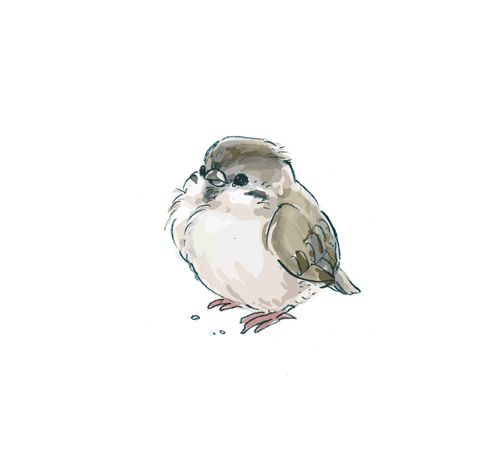 An Avilus enjoying the snowfall during a heavy blizzard, Source

Birds of the avilus race are somewhat difficult to spot in the Material Plane, mostly because they share the exact appearance of common songbirds found outside of urban areas and dense forests. The key difference, however, is that avilians are beings with high intelligence. Their wings are also mutated from the magic that they were born from, allowing them to use their wings as appendages that can pick up items, much like a human does with their hands.

Their creation stems from an all-powerful human wizard from centuries ago. With his magic, he could do anything he wanted, from bending reality to creating living beings at the snap of his fingers. However, what he wanted more than anything is a friend. Not just a friend that would instantly enjoy his company, but a friend that he could build a relationship with, like what the common-folk do in their simple, magic-less villages. He was never a social person, often staying in his tower for long periods of time because he never needed to leave. After all, he could just create the food and water he needed out of thin air. In the village just beneath the tower, humans labeled him as a dangerous and soulless hermit due to his living practices. Because of their prejudice towards the wizard, no-one ever interacted with him, fueling his desperate search for a friend. As he tried to create a spell that would end his agony, a small bird sat atop his tower's window, carefully watching him work. The wizard stopped his meticulous sorcery and stared at the bird. He tried walking up to it but it flew away as the wizard took a step, as any common birds do. Even if it was the bird's natural instinct that caused it to fly away, this event was the breaking point for the wizard. His anger towards his failed magical experiments combined with the way that society treated him caused his anger to boil over. In a furious rage, he fired a beam of magic at the bird in an attempt to harm it. Unbeknownst to him, however, his desire for a friend didn't kill the bird but rather gave it the intellect and sentience of a human being. After apologizing to the bird, the wizard tried to befriend the bird with what little social interaction skills he had. After clearing up the misunderstanding and giving the bird a place to live in his tower, the wizard and his avian ally soon became the best of friends.

Centuries later, specific regions of the Material Plane and even small areas of the Elemental Plane of Air are dotted with minuscule populations of avilians. The avilus try to keep their intellect a secret but there's always the inevitable slip in their secrecy. As a result, they have formed a positive relationship with other humanoid races, often living among them in their giant cities and small villages.

Avilian society is one shrouded in secrecy. It is crucial for every avilian to keep their speaking ability secret as to not draw attention to themselves, but they have a problem with helping out those that are feeling negative emotions. Because of this, there have been multiple occasions where an Avilian has spoken to another race to cheer them up. Thankfully, many other races only speak of avilians in legend or write about them as characters in children's storybooks. They generally share the same lifestyle as their bird brethren but have also taken up life in the worlds of other races. Because of their radiant positivity and optimism, many humans have allowed avilians to join their families and their nations. When avilians join a society of another race, they usually take up the role of psychological help, aiding those that are feeling depressed or upset in order to change the place they live in for the better.

Because of their upbringing and their close relations with other races, the Avilus have collectively decided to let other races establish names for themselves, deciding on one that both they and their non-Avilus friends like. Avilus names are usually the first names of other common races, ranging from human first names to elven and even dwarven first names.

Optimistic songbirds that are just as likable as they are fast.
Ability Score Increase. Your Dexterity and Charisma scores increase by 1.
Age. It seems as though the positivity that avilians bring to others causes them to have longer lives as well. Most avilians live to about 150-200 years, aging only once they have about a decade left to live.
Alignment. All avilus are good without a doubt, but while most avilus are lawful, a few avid adventurers in the avilian community have grown to have a chaotic mindset.
Size. Avilians are very small. So small, in fact, they can comfortably fit in the palm of a Medium creature's hand. Most avilians are about 7-10 inches tall and weigh 0.5-1 lbs. on average. Your size is Tiny.
Speed. Your base walking speed is 10 feet. You have a flying speed of 50 feet.
Avian Anatomy. Your avian anatomy causes you to wield weapons and use items in a very unorthodox way compared to other races. For the purpose of using melee weapons, ranged weapons that require two "hands" to draw and fire, and using "hands" to cast spells with somatic components, your wings act as your hands. In addition, while flying and/or hovering, you can only take the Attack action with Undersized weapons, in which case you use your toes to either hold your weapon or draw and fire a ranged weapon.
Overwhelming Positivity. Your radiating personality seems to have a lasting impact on those that meet you. You are proficient in the Persuasion skill and may double your proficiency bonus when making a Persuasion skill check on a creature that is currently in a negative emotional state such as depression or anger.
Beast. Your creature type is beast.
Languages. You can speak, read, and write Common and Auran.

When creating an Avilian character, you can use the following table) of traits, ideals, bonds, and flaws to help flesh out your character. Use these tables in addition to or in place of your background's characteristics.