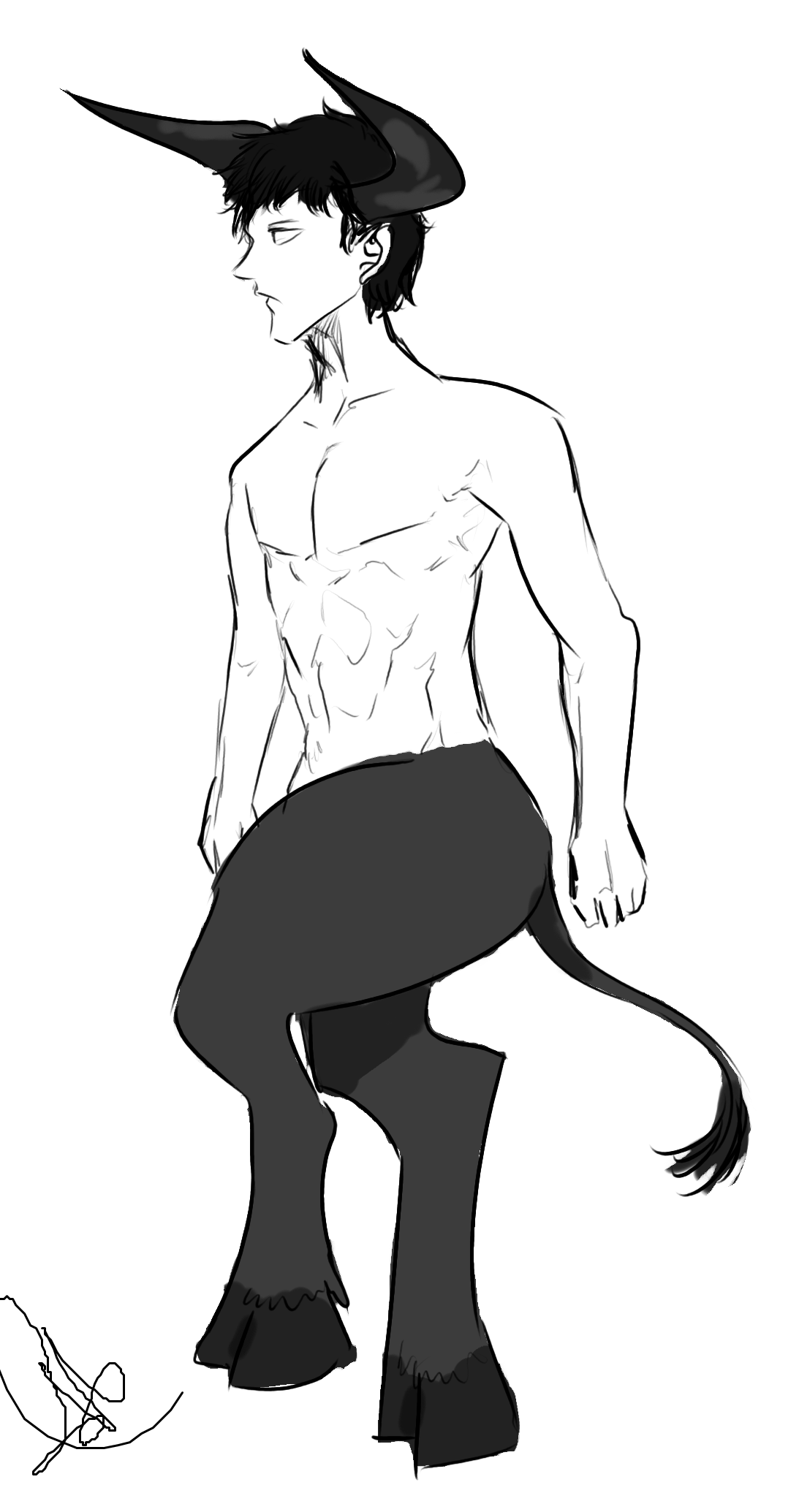 Yakataure are humanoids with bovine traits. They are sometimes called reverse minotaurs because they have the top of man and the bottom of an ox. But they have the great horns of a yak or other bovine animal on their head, poking out from their head of hair. Their hair is usually the same color as the hide which covers their cow part, which includes a tail. Their hair and hides are usually hues ofblack, brown, or white with blak spots. Most yakataure have remarkable physique, being literally as strong as an ox. To show off this proud body, most of them resort to minimal clothing, adoring themselves with jewelry and decorative cloths as opposed to proper clothing.

Similar to the minotaur, yakataure are associated with the demon lord Baphomet. This is a rather unfair comparison since yakataure are more closely related to satyrs than they are to minotaurs. It is believed that the yakataure actually immigrated from the eastern continent after crossing from the Feywild into the Material Realm. They recount an exodus due to a severe and prolonged drought which drove them to spread elsewhere in search of better fortunes. Their human top luckily has prevented too much violence and stigma towards them, no more than one would think for a satyr. However, their rowdy and proud ways often get them into petty fights that easily escalate, giving them a violent and brutish reputation.

They are nomads, a lifestyle carried over from their homeland in the plains of the east. They commonly exchange and stay for brief spells in local towns and cities to chew the fat and perform labors for money. Above all, yakataure love to showcase their physical prowess. As such, news of things like tournaments and games of strength will draw them in. To balance out this muscle-loving attitude, the leader of the yakataure must be able to show restraint of their hubris and display an understanding of wisdom. This tricky process rarely works out that well since yakataure are notoriously impatient, and so many a time they are stuck with a leader as brash and loud as the rest of them.

Coming from the plains among other tribes, yakataure practice a form of reverent animism. They do not believe in gods in the deific sense that something affects their fates. Rather, things in nature have their own spirit and will. Animals like the eagle and ox are particularly sacred due to their strong life force and symbolic significance. Nature overall is a place where one is among others that deserve respect. Thus, a river should not be tread upon and dirtied without proper sacrifice, and a mountain shoulder be offered prayer before it is to be mined.

Both male and female members of this race share these qualities. They are headstrong individuals who are unapologetic about being themselves to the point of loudness. Their bodies remain a great status of pride for members of the race. For males, it is good to be virile, and thus they will spar often with one another in wrestling to prove their physique. Females view their bodies as matches for their mates, to produce the best offspring; thus, females and males try to find a mate which is around their level in strength.

The language of the yakataure, though they do speak Common, is tinged with their ancestral language back in the plains. These names often impart an implication of strength since they derive from animals of desirable traits.

Bovine humanoids, reverse minotaurs
Ability Score Increase. Your Strength score increases by 2 and your Constitution score increases by 1.
Age. Most yakataures reach maturity at about 20 years old and live for about 200 years.
Alignment. While certainly brash, they are not evil. They are usually more chaotic and neutral, concerned with their own affairs.
Size. Yakataure are quite tall and broad. Your size is Medium.
Speed. Your base walking speed is 30 feet.
Horns. Yakataures have powerful horns capable of goring foes. Your horns are natural melee weapons, which you can use to make unarmed strikes. If you hit with them, you deal piercing damage equal to 1d6 + your Strength modifier, instead of the bludgeoning damage normal for an unarmed strike.
Brazen. You have advantage in saving throws against being frightened.
Monstrous. Your creature type is monstrosity instead of human.
Gore. Immediately after you move at least 20 feet straight at a creature, you can make one melee attack with your horns as a bonus action.
Superior Physique. You are proficient in the Athletics skill.
Languages. You can speak, read, and write Common and one other language of your choice.