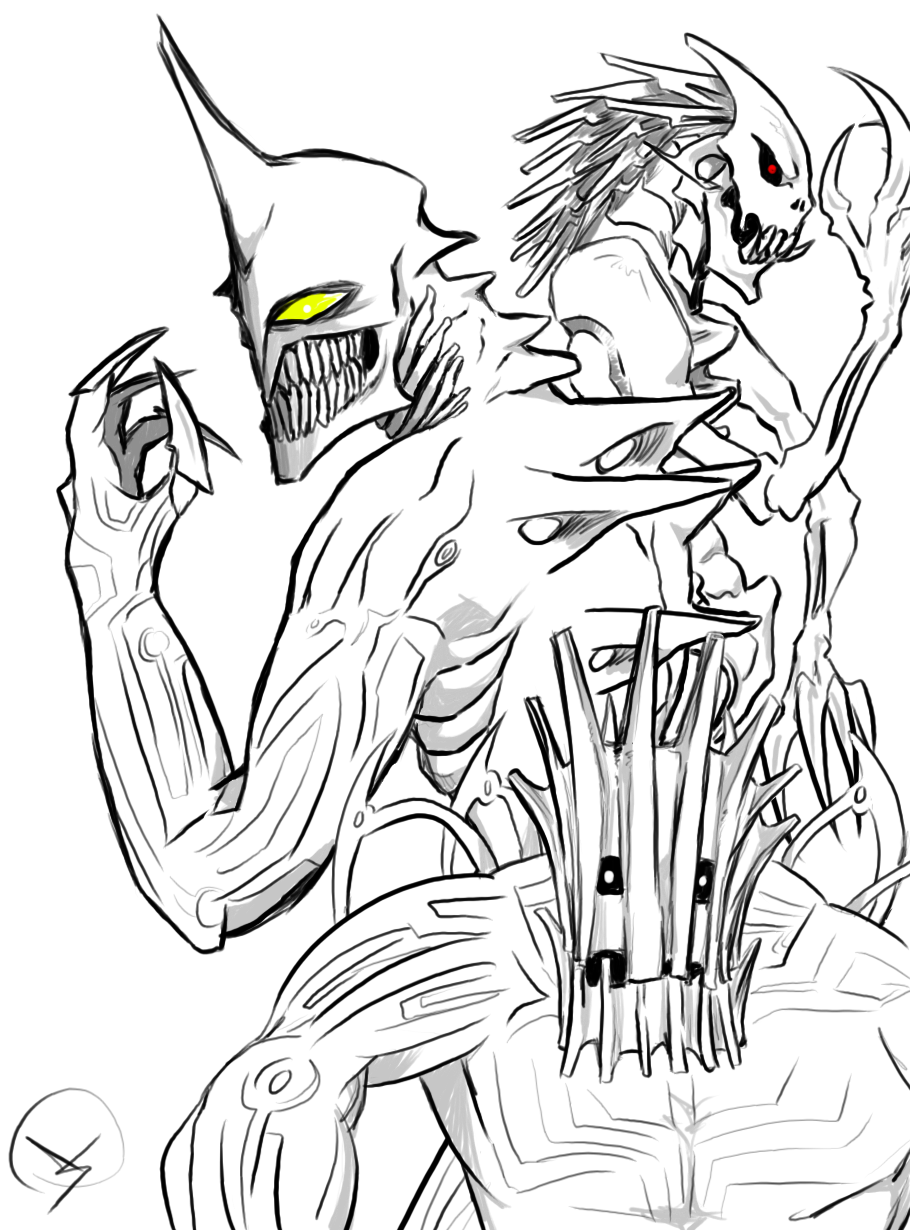 These creatures simply called white resemble odd humanoids of various builds that all share a bony exterior. Their bodies are wholly white and have the texture of hard bone. Few whites share the exact same features, and vary in shapes of parts. Some might be digitigrade while others have feet like humans. They all sport growths of jagged bones and hard bony armor on their bodies. It is said whites are completely hollow, but their dense body structure makes them heavy. They have a variety of eye colors within the sockets of their bony hard faces. When they speak, they are known to have deep voices and their mouths do not move. They are known to also make high pitched shrieks or whistles.

The white are a race of fiends who bear not flesh, but bone. They are known to be extremely hardy and durable, even against the blades of the celestials. Supposedly, white came to be as a result of development into utilization of skeletal fiends. The end result was supposed to be a replication of a creature like a skull reaper or a similarly powerful skeleton beast under the fiends control. The fiends plans were indefinitely put on hold when an unexpected pincer attack from devils on one side, and feisty adventurers on the other. The participating fiends were slaughtered and the died atop their failures. While the devils and adventurers fought a subsequent squabble, the fiendish blood and anger leached into the bones that they had been researching. From the piles of detritus, the white emerged en masse and took the devils and adventurers by surprise, slaughtering them in revenge. Then, after the carnage subsided, the white gave a lonely howl and slogged on in their horde, looking for more lives to end.

There is a single society of white, called the horde. They are known to travel like a scourge along the edges of society and civilization, outside the reach and attentions of most kingdoms. It is believed they are driven solely by an innate malice which is evident even in the white who desert. The white are known to wander for days on end along wastelands, likewise leaving only wasted land in their wake. Villages are wary of the horde and are usually quick to flee when they come, for the white are creatures of extreme violence. They corrupt the blood of victims and pour it over their own bones after stripping it clean of flesh and blood. The bones rise again as another white after the bone mutates to form an appropriate body. The white thus are dangerous even if the victim is not killed, as the bite of a white is able to corrupt the blood to burn away at the flesh, killing the afflicted within a week or so.

The white rarely take up names, especially when still in the horde. Those who desert may take a name out of necessity, and so have very simple aliases. These names tend to have no gender since the white lack gender.

These fiends of bone seek carnage
Ability Score Increase. Your Strength score increases by 2, snd your Dexterity score increases by 1.
Age. They have no real limit to their age. They are risen fully mature and they can likely wander indefinitely, not aging nor dying of it.
Alignment. The white are very much geared for destruction. They are still chaotic and evil like demons at heart, despite not having one.
Size. You are as large as a human, though possibly leaner or stockier. Your size is Medium.
Speed. Your base walking speed is 30 feet.
Darkvision. You can see in dim light within 60 feet of you as if it were bright light, and in darkness as if it were dim light. You can't discern color in darkness, only shades of gray.
Skeletal Armor. Your body is covered in tough, hard bones, making a protective carapace on yourself. While unarmored, your Armor Class is equal to 13 + your Dexterity modifier. You may use a shield and still gain this benefit.
Risen Fiend. Your creature type is fiend and undead. You do not need to eat, drink, sleep or breathe. You are vulnerable to radiant damage, but resistant to fire damage.
Corrupting Bite. You have the power to poison the blood of other creatures. As a bonus action, you may make a special unarmed strike with your fanged maw. If it hits, the target is afflicted with your corrosive venom for 1 minute. At the end of each of their turns, they take 1d4 poison damage. They may attempt a Constitution saving throw of DC 8 + your Constitution modifier at the beginning of each of their turns to fight off the venoms effects, ending it upon success. You must finish a long rest to use this trait again.
Languages. You can speak in Common and Infernal, but you are illiterate.