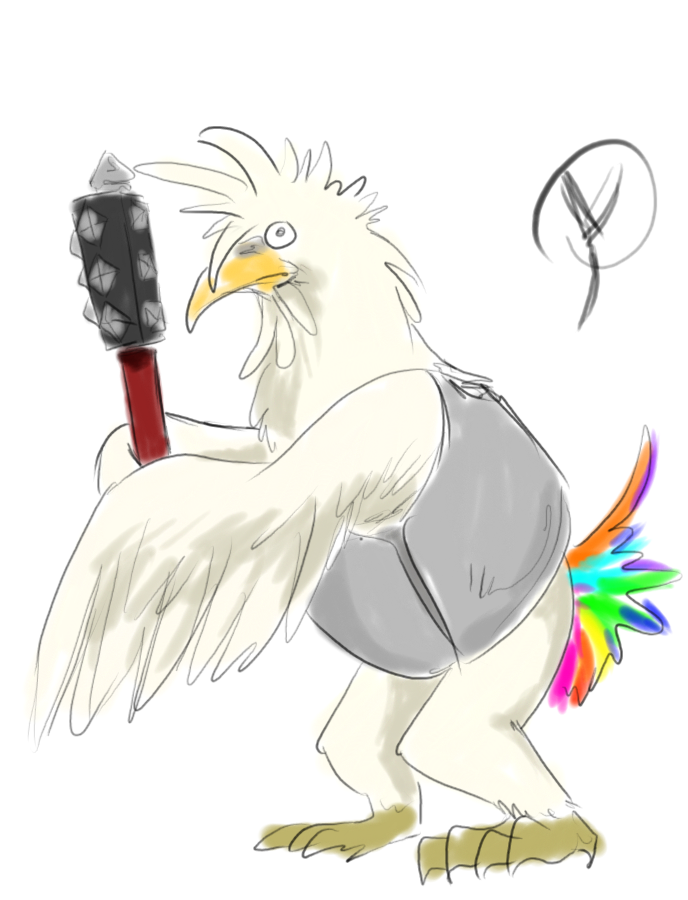 Werecockerels are humanoids whose bodies are covered in white or tawny colored feathers with the heads of chickens or roosters. Their eyes a bit bugged out and sometimes unfocused. They have a particularly fluffy and tall crest on their head like a cockatiel. Their feet are clawed like that of a bird and their arms are wings. On their rump is a sprig of different colored feather tails. They are dim of mind, but are agile and enduring. They are infamous for their uncanny capability to briefly keep fighting even after apparent death, owing to their bodies feeling pain slower.

Werecockerels have a bit of stigma as creatures of a cursed history. As expected from the "were" in their name, cockerels have an origin associated with humans. There was supposedly research being done on cockatrices and basilisks. The hope was to utilize the powers of petrification as an innate trait in a humanoid being, something like the half-basilisk.

According to the study's account, they skipped the step of incubating cockatrice eggs via a toad and instead infused human essence into it. What resulted was the werecockerel. They lacked any of the petrification powers desired at all, instead resembling a normal cockerel instead. So they were called were cockerel. What they did have, however, was an odd vitality in them that made them seemingly evasive of death to an extent.

These creatures then proceeded to impregnate human women by dripping their seminal fluid into unsuspecting public baths. From this, the race propagated. Needless to say, many women were horrified at what they gave birth to. However, it was not so easy to kill these things from birth. Some who resorted to exposing the newborns only set them free. Others tried bashing in the heads of the babies, but after the first stroke, the creatures would hop up and scream wildly, running away with amazing speed for a creature just born. Enough of the babies survived childbirth and so the werecockerel race was well constituted as these freaks of nature mated and populated freely in nature.

Werecockerel are certainly a sight to shriek at if you were an unsuspecting mother. If you met one on the road, however, they wouldn't be much different from other avian races on a glance. Ever since their violent conceptions, the sorcerer has luckily been dead and the werecockerel families live in their own small enclosures in the wild, among the low grasses and hills where they house in hills and small huts. Werecockerel usually mate with others of their kind, though some do mate with humans or other bird-like creatures like kenku and raptoran. Some are actually nutty enough to go the sorcerer's way of doing things too.

Like how chickens make their "bawk" noises, which sound like they always begin with a "b," werecockerel names begin with the same noise.

These rooster-like humanoids are infamous for their uncanny capability to briefly keep fighting even after apparent death.
Ability Score Increase. Your Constitution score increases by 2, and your Dexterity score increases by 1.
Age. Werecockerels age at a rate similar to humans, though few live to die of old age.
Alignment. Werecockerel, being dull and simple, tend to be neutral.
Size. Werecockerel are usually a bit shorter than humans. Your size is Medium.
Speed. Your base walking speed is 35 feet.
Chicken Wings. While you cannot fly, you can buffer your wings to avoid hitting the floor. As a reaction, when you would take damage from falling, you can flap your wings and instead take no damage, landing on your feet.
Running Headless. You are rather hardy, though you are also incredibly chicken-headed. If you are reduced to 0 hit points, you may expend a reaction to keep 1 hit point. You regain use of this trait after you finish a long rest.
Speak with Birds. You have advantage on Wisdom (Animal Handling) checks against avian creatures.
Chickenheaded. Being scatterbrained, people would find it hard to get inside your head. You have advantage in saving throws against being charmed and having your thoughts or intentions known by any divination magic.
Languages. You can understand and speak Common, but you can't read or write.