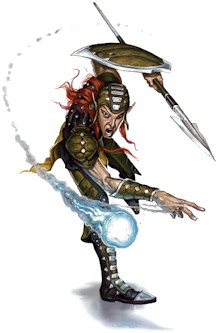 Warmages are trained in both swordsmanship and the arcane. Having spent years of their life on perfecting both simultaneously, they are neither the experts of swordplay that Rogues are, nor are they the masters of magic Wizards oft claim to be. However, to their advantage, they need no awkward and shrewd implements to focus their spells, as they can more readily use their weapons instead. Clever in their use of the battlefield, and their power to manipulate it if the need arises, warmages can exchange blows with the toughest of opponents while ripping them to shreds with their arcane power.

As a warmage, you will be a true spectacle: Offering both spell and sword, there will be numerous ways for you to dismember and disintegrate your foes. Whether you are a true student of the Arcane and seek to further your knowledge in the arts or are merely a wandering mercenary with a hidden power, you possess the potential to topple dynasties or forge the destinies of kings - or perhaps you will become a king in your own right.

Whatever the path, the goal is simple to you: Superiority in versatility. Who will bend to your will, and who will break before it? 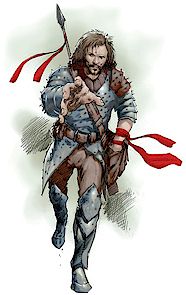 Warmages have an array of focused abilities, most of which are categorized into one of three character builds: Warmage magister, warmage spellblade, and warmage warder. Every warmage relies upon Intelligence for the majority of their damage, with secondary emphasis on Strength or Dexterity or Wisdom, primarily based on character build and power choice.

Your preferred powers are those that cause the most havoc among your enemies: Tendrils of lightning that lash out and shift from foe to foe, displacing each in turn; shards of earth jutting from below your opponents' feet, separating groups with walls of rock; ripples of arcane force knocking enemies to the ground. Wisdom amplifies the effects of powers that manipulate the battlefield and movements of your enemies, so it should be your highest ability score. Intelligence increases your offensive powers' damage dealing capabilities, so make it your second highest score. Your third highest score should be Strength or Dexterity, as it increases the damage of your basic attacks. Select powers that help you control the flow of battle by waylaying your enemies and making good use of your high Wisdom score.

Your true prowess involves dealing lots of damage to as many targets as possible. Engulfing areas of the battlefield in flame or bathing them in the unbearable force of arcane explosions is your forte. Intelligence is - by far - your most beneficial ability score; the more damage, the better. Coming in a close second is Strength or Dexterity; increasing the throughput of even non-magical abilities is very important. Wisdom pulls in third, as impairing the advances of already obliterated targets is highly unnecessary. Select powers that really dish out the damage and make your high Intelligence score work wonders for you.

You revel in always keeping the advantage in battle, moving seamlessly through a crowded war-zone while upheaving columns of stone, slamming great pillars of fire into the ground, freezing clumped enemies in place, and always keeping one step ahead of your foes. Intelligence affects your damage-dealing powers the most, so it should be your highest ability score. Second should be your Wisdom score, as it increases the effectiveness of your movement impairing powers and your powers focused around your own mobility. Strength or Dexterity should be your third highest, as it increases the damage of your basic attacks. Select powers that keep your mobility high and your foes at bay, whether through damage or manipulation.

Warmages wield all kinds of weapons - from the greataxe to the flail or rapier - so there isn't always a free hand to fiddle about with, fumbling over more strictly arcane instruments. Luckily for warmages, they've developed a method of using their wielded weapons as implements in addition to any orb, rod, or staff they can get their hands on, adding their magical enhancement bonus to attack and damage rolls of spells that have the implement keyword.

Your powers consist of both martial and magical exploits, achieved by contemplation and experimentation. Some powers focus on controlling the battlefield, while others focus more on destroying enemies directly. It is suggested to mix and match these diverse powers, but they are ultimately yours to choose from.

Whether trained or innate, the Warmage's powers leave others in stark awe at their applications. It's all about manipulation and pulling the right strings, then every puzzle piece falls into place.

For Heroic Tier, levels 1—10, see Warmage (4e Class)/Heroic At level 1, you choose a arcane implement specialization and empowering method. These are found below.

You are adept at using both weapons and arcane implements in your spells, but are more effective at one kind of implement combat in particular.
Benefit: Choose one of the following specializations.

Once per encounter as a free action, you may increase the amount of squares you move through the effects of one of your powers by an amount equal to your Wisdom modifier. In addition, you gain +1 bonus to AC, as your image is slightly blurred from reality while holding a rod. You must wield a rod to benefit from this feature. This form of specialization is good for warmage warders because it increases personal mobility and defense without reducing the impact of offensive capability and control.

Your Orb is not required to be held in your hands to use its magical enhancement bonus or effects and instead floats around you as one of your Mystic Orbs and can be Empowered like a normal Mystic Orb. This Orb cannot be destroyed by warmage spells and, once per encounter as a free action, you may increase the displacement of any foe affected by your powers by an amount of squares equal to your Wisdom modifier. You must wield an orb to use this ability. Warmage magisters benefit the most from this specialization, as it improves the effectiveness of abilities that displace your foes.

Warmages have found many ways to get the most out of their arcane magics. One way to make the most use of the magic around them is to Empower one of their Mystic Orbs. Doing this causes the Empowered Orb, when used in a spell, to increase that spell's chance to hit. Another way to get that last drop of arcane power is to fully utilize the leftover energies of one of their Empowered Mystic Orbs. Benefit: Choose one of the following methods to empower your mystic orbs.

Power of the Force Magi[edit]

After using an Empowered Mystic Orb in a spell, you may choose to lash out at an enemy within 15 squares, sliding them an amount of squares equal to your Wisdom modifier.

Power of the Phase Magi[edit]

After using an Empowered Mystic Orb in a spell, you may choose to absorb the residual energies, phasing an amount of squares equivalent to your Wisdom modifier.