Blood and guts, screams and slaughter, thousands dying every day... no, it's not a deathtrap dungeon - just a common slaughterhouse. Butcheries and abattoirs can be found in pretty much every setting, so the quest is easy to play in almost all campaigns. It is originally designed for the Years of Gold campaign setting.

Von Morr Family Butchery is a locale-based quest, drawing heavily from the creepy feel of abattoirs to create an atmosphere. Have the players stumbling through the place, preferably after dark, avoiding watching eyes. The quest also works fine as a single-player quest, where a rogue or other stealthy character sneaks through the premises. The lower-level the party is, the more they are expected to deal with opposition through stealth, diplomacy and cleverness instead of out-and-out violence.

Wilhelm von Morr might have his eyes on Redford, but Calimport is his base of operations. It's far away from his worst enemies, and the smaller city is better for keeping out of the spotlight in general. It is in Calimport that he established one of his more profitable enterprises: the Von Morr Family Butchery, a large abattoir with a more industrial approach to slaughter. It easily blew the many smaller slaughterhouses of Calimport out of the water, and thanks to Von Morr logistics, also delivers meat to as far away as Brimhaven.

The players enter the slaughterhouse for their own reasons, as indicated by the chosen plot hook. Since the butchers who work here are in no way evil or even committing illegal acts, the party is expected to sneak and avoid opposition. Even when fighting, a good-hearted person would rather knock the enemies out cold or drive them away. 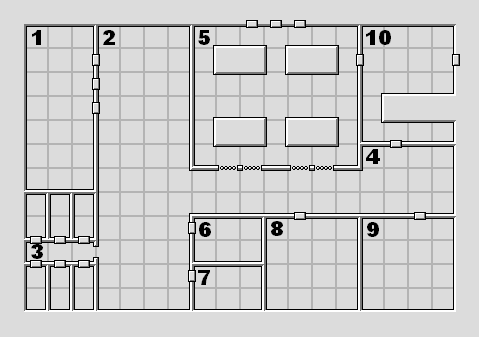 The players are likely to enter the butchery either through the front door (perhaps not the best idea) or the sliding doors to the meat production area (then again, also not a good idea). The building has no windows except for thin airing vents near the roof (some two inches wide, so no entrance that way).

Your breath turns into icy mist as it leaves your mouth, and you shiver to your core - this must be where the cold of the storage area emanates from. But a quick glance doesn't reveal to you the source of the cold. It does reveal, however, a line of humanoid corpses, hung up from meat hooks and frozen solid, in the back of the room. Suddenly you're shivering from more than just cold.

15ft.-by-35ft. room, 10ft. high. An iron railing (runs from A3 to A1, G1 and G3), from which hang twenty meat hooks, seven of which contain frozen human, dunner and dwarf remains. Two ice mephits, hiding behind two of the larger corpses (DC 23 Spot check to notice).

The mephits are the cold storage cooling system, using their breath weapon repeatedly through the day to maintain the temperature at roughly -3° to -4° Celsius. They consider the place their home and will defend it fiercely, never escaping or backing down. Both use their breath weapon to start a battle, then one stays back and casts magic missile while the other goes to the strongest melee fighter to cast chill metal (preferably on armor). They repeat their breath weapon when necessary, and support each other cleverly.

The temperature drops sharply as soon as you step into this hallway. The room ahead of you is a gruesome sight: line after line of pig and cow carcasses, all frozen and hung from line after line of meat hooks. All surfaces are made of white tiles with the occasional blood splatter. The fact you can't see beyond the corpses makes you somewhat paranoid. Everything looks cold, sterile and uninviting.

Tarngoth, a minotaur butcher armed with a fine butcher's cleaver (masterwork greataxe +10 melee), along with two butchers are hiding some distance into the hall. Tarngoth was a particularly clever monstrosity that Wilhelm's specialty meat sources brought to Wilhelm. The intelligent noble immediately recognized the intelligence in the "dumb animal's" eyes, and let him work in the slaughterhouse instead of being processed by it. Tarngoth is incredibly thankful, and thus incredibly loyal, to Wilhelm.

Tarngoth always starts the battle by surprising enemies with a quick pull on the most appropriate railing, smashing them with meat hooks and animal carcasses. He keeps doing this while the two butchers approach (they're rarely hurt by the railings, as they are clever enough to move to the other side of the room and get a +4 circumstance bonus to their Reflex saves) and engage foes in melee. When the butchers go down, Tarngoth wades into melee and destroys opposition in close quarters. He never backs down, but the two butchers will if Tarngoth falls.

Ahead of you lie three sturdy-looking, riveted doors in a small hallway. Five of the doors have small brown notes pinned to them, with titles like "Brimhaven Squid" and "Awag Enid Scalebeast". Only the very last door down the hall has no note.

There's a sudden rush of cool air as you step into this room - not so cold as to be uncomfortable but cold enough to be noticeable. The room leads to a corridor that ends in a thick leather curtain to the west, and there are a couple of doors on the southern wall. Asides from a few large wheelbarrows in the corner, the room is unfurnished.

20ft.-by-15ft. room with a 35ft.-by-10ft. corridor, 10ft. high. All doors unlocked (hardness 10, 15 hp). Two iron railings (corridor A1-6 and B1-6) with dozens of meat hooks. Thick leather curtains (the two doors to Meat Production, corridor A4-B4) to keep the cold of the storage away. A few large wheelbarrows for transporting carcasses, and often a few butchers, having a smoke.

Your first glance into this room is enough to tell you that it's a butchery. The white tiles of the floor and walls are splattered with age-old and newer blood, the four massive tables in the room are currently occupied by several animal carcasses, and the bins under the tables are chock-full of varied offal. You can taste the ferrous tang of blood in your mouth as you breath the heavy, rather cool air.

35ft.-by-30ft. room, 10ft. high. All doors unlocked (hardness 10, 15 hp). Two iron railings (C3-F3 and C5-F5) with dozens of meat hooks. Blood pit (C4-D4), 5ft. deep, filled about halfway with blood. The long northern door slides to the side to fit wheelbarrows and carriages in. Four massive tables (B2-3, B5-6, E2-3, E5-6) which contain several animal corpses in various states of butchery, large butcher's knives (count as short swords), cleavers (count as handaxes) and meat hooks (count as spiked chains). A butcher's knife of animal bane on one of the tables (B5; Search DC 25 to locate). At least four butchers occupy the room at all times, with a couple more just outside, either waiting for a shipment or smoking.

If the butcher's become aware of the party, they'll confront them. Confrontation can turn bloody if the party has no explanation for their intrusion, and at the very least the butchers will very likely want to hold on to the intruders for Tarngoth to rough them up a bit. The butchers are quick to repurpose the many tools in the room as weapons. At least one will want to show his proficiency with meat hooks.

This is just a normal storage closet, very little to see here. It's filled to the brim with barrels, some stamped with a Von Morr trademark, some unstamped and empty. The complete lack of rats is a rare and welcome sight in a storage in this city.

The thick dust you unsettle as you step into this room hints that it hasn't been used for a while. You wonder why: your first glance doesn't reveal any clear fault. What little wares remain in the room are unmolested.

15ft.-by-10ft. room, 10ft. high. A couple of empty barrels and a wheelbarrow in the back of the room. A large closet (B2-3), filled with two specimens of violet fungus. The butchers haven't yet had the time (or the equipment) to get rid of them. Behind the fungus lie a bunch of butcher's tools, several stamps and associated ink bottles, a potion of cure moderate wounds and a silver ring of masterwork design (worth 450 gp).

The mindless fungi defends their "home" by attacking anyone who opens the closet, and chase them to the door; they will go no further. If hit with ranged or magical attacks, they retreat back to the safety of the closet.

This room is apparently used for thawing the frozen meats, and the temperature is in sharp contrast to the previous corridor. The raised platform in the middle of the room is slathered in watery blood and offal, likely from the carcasses hanging from the ceiling. In every corner of the room there is a boiler-type, blackened furnace, keeping the temperature of the room up.

20ft.-by-20ft. room, 10ft. high. Two iron railings (one runs from B1 to B4; the other runs from C1 to C4), from which hang thawing animal carcasses. Each furnace is activate, keeping the temperature at roughly 60°-70°C. The controls outside the door can turn the temperature from off (22°C) to full power (160°C); the temperature change takes roughly 30 seconds for each 20°C the temperature will change. Clever butchers might attempt to trap foes in the room and turn up the heat.

Somewhat more elaborate than the rest of the building but still quite modest, this room is clearly an office of some sort. The long table with a tall chair behind it and the full bookshelves are a dead giveaway. There's even a plant in the corner! If it wasn't for the distant smell of bloodied meat, you couldn't tell this was part of a butchery. The papers on the office table are in disorder.

20ft.-by-20ft. room, 10ft. high. A large office table (C2-3) with a tall chair behind it and a pile of managerial documents on it. Two bookshelves on the eastern wall, filled with books on animal husbandry and containment, as well as a scroll of animal trance (A4; Search DC 25 to locate) and a scroll of speak with animals (C4; Search DC 35 to locate). A potted plant (A1) with the key to all the building's locks hidden in the soil (Search DC 20 to locate).

The first thing you notice when you step in is the stuffy air that carries an unpleasant, earthy smell. That, of course, can be expected of a butchery. This is the foreroom, with several billboards on the walls (filled with notes on worker safety, shift lists and other similar items) and a line of coat hangers, on which there are a dozen or so dirty-white aprons. The guard eyes you warily from behind a long desk.

20ft.-by-25ft. room, 10ft. high. A long desk (D2-4) with worker lists, shift timetables and a light crossbow all hidden in drawers. Billboards on the northern wall. A guard, who is one of the butchers armored with chainmail (AC 15, touch 10, flat-footed 15) and wielding a warhammer (+5 melee, 1d8+4/×3) watches over this area at all times. He will call for backup if he spots intruders, and will not stay to fight and get killed alone.