"For one who has not yet lived a single lifetime, you're a wise man, Van Helsing" 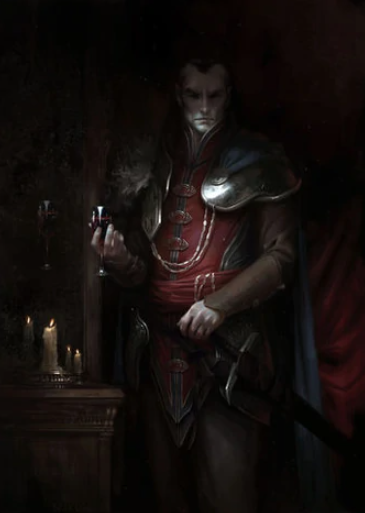 Awakened to an endless night, vampires hunger for the life they have lost and sate that hunger by drinking the blood of the living. Vampires abhor sunlight, for its touch burns them. They never cast shadows or reflections, and any vampire wishing to move unnoticed among the living keeps to the darkness and far from reflective surfaces.

Whether or not they retain memories from its former life, their emotional attachments wither as once-pure feelings become twisted by undeath. Love turns to hungry obsession, while friendship becomes bitter jealousy. In place of emotion, vampires pursue physical symbols of what they crave, so that a vampire seeking love might fixate on a young beauty. Others surround themselves with art, books, or sinister items such as torture devices or trophies from creatures they have killed.

While many different versions of vampires exist, you can make an archetypal Vampiric quickly by following these suggestions. First, Dexterity should be your highest ability score, followed by Charisma. Second, choose the Revenant background.

As a Vampiric you gain the following class features.

As an action, you can bite a creature near you. That creature must make a Con Save against 10 + your Dexterity Modifier. On a failed save, roll a d8 and turn the damage into temporary hit points. You can then keep the hit points. On a successful save, the creature takes damage but you do not gain hit points. The amount of damage increases as you gain levels in this class, as shown in the Bite column of the Vampiric table.

Beginning at 1st level, your disconnect from life gives you the following features:

Starting at 2nd level, you can use your action to assume the shape of a bat. You can use this feature twice. You regain expended uses when you finish a short or long rest.

While you are transformed, the following rules apply:

At 17th level, you can instead turn yourself into a giant bat with this feature.

Also at 2nd level, if you stare into a creatures eyes (and they stare back), you can put them under the effects of charm person the duration. You cannot use this feature again until after a short rest.

At 13th level, the effects are more similar to that of command.

At 9th level, when you hit a creature with an unarmed attack and roll damage against the creature, you can replace the damage type with necrotic damage. While you are using your Form of Dread, you can roll one additional damage die when determining the necrotic damage the target takes.

At 14th level, undead have difficulty harming you. If an undead targets you directly with an attack or a harmful spell, that creature must make a Wisdom saving throw against your spell save DC (an undead needn't make the save when it includes you in an area effect, such as the explosion of Fireball). On a failed save, the creature must choose a new target or forfeit targeting someone instead of you, potentially wasting the attack or spell. On a successful save, the creature is immune to this effect for 24 hours. An undead is also immune to this effect for 24 hours if you target it with an attack or a harmful spell.

At 18th level, you manifest an aspect of your curse’s dreadful power. As a bonus action, you transform for 1 minute. You gain the following benefits while transformed:

In addition, when you are reduced to 0 hit points, you can cause your body to explode. Each creature within 30 feet of you takes necrotic damage equal to 2d10 + your vampiric level. You then revive with 1 hit point in your previous space, along with your gear, and you gain 1 level of exhaustion. Once you revive this way, you can’t do so again until you finish 1d4 long rests.

The appearance of your Form of Dread reflects some aspect of your curse. For example, your face might transform into bat-like features due to your vampiric curse.

Your Vampiric Bite attack will no longer end the Hypnotic Gaze effect.

At 1st level, you chose the curse of you vampirism, all detailed at the end of the class description. Your choice grants you features at 3rd level and again at 7th and 11th.

Baobhan Sith Vampires focus on controlling their victim's mind and bending them to their will.

You can target 3 creatures at 3rd level, and the effects can include Calm Emotions.

You can target 4 creatures at 7th level, and the effects can include Sleep.

You can target 5 creatures at 11th level, and the effects can include Suggestion.

The Empusa attempt to extend their powers through the use of magic.

When you reach 3rd level, you augment your vampiric prowess with the ability to cast spells.

The Spellcasting table below shows how many spell slots you have to cast your spells of 1st level and higher. To cast one of these spells, you must expend a slot of the spell's level or higher. You regain all expended spell slots when you finish a long rest.

For example, if you know the 1st-level spell Cause Fear and have a 1st-level and a 2nd-level spell slot available, you can cast Shield using either slot.

The Spells Known column of the Spellcasting table shows when you learn more necromancy spells of 1st level or higher. Each of these spells must be of a level for which you have spell slots. For instance, when you reach 7th level in this class, you can learn one new spell of 1st or 2nd level.

Spell save DC= 8 + your proficiency bonus + your Intelligence modifier

At 7th level, when you cast a necromancy spell of 1st through 5th level that targets only one creature, the spell can instead target two creatures within range and within 5 feet of each other. If the spell consumes its material components, you must provide them for each target.

You can give yourself vitality when you cheat death. You can regain hit points equal to 1d8 + your Constitution modifier (minimum of 1 hit point) when you succeed on a death saving throw. Once you use this feature, you can't use it again until you finish a long rest.

You are expert at slinking through shadows. You gain the following benefits:

At 13th level, you can now phase partially into the realm of the dead, becoming like a ghost. As a bonus action, you assume a spectral form. While in this form, you have a flying speed of 10 feet, you can hover, and attack rolls have disadvantage against you. You can also move through creatures and objects as if they were difficult terrain, but you take 1d10 force damage if you end your turn inside a creature or an object.

You stay in this form for 10 minutes or until you end it as a bonus action. To use this feature again, you must finish a long rest or destroy one of your soul trinkets as part of the bonus action you use to activate Ghost Walk.

You can now cast it on yourself without using a spell slot. After you do so, you cannot use it again until after a long rest.

Soucouyant enhance their shapeshifting to go beyond what most vampires can do.

At 11th level, you can choose to turn yourself into a swarm of animals (such as a swarm of bats) rather than a single creature.

Strigoi rely on their strength and endurance to overpower their prey.

Starting at 3rd level, you can destroy another creature's life force by touch. When you hit a creature with a melee attack, you can deal extra necrotic damage to the target. The damage equals 5 + twice your vampiric level. After you use this feature you cannot use it again until after a long rest.

At 7th level, you gain the ability to infuse your weapon strikes with necrotic energy. Once on each of your turns when you hit a creature with a weapon attack, you can cause the attack to deal a 1d8 necrotic damage to the target. When you reach 14th level, the extra damage increases to 2d8.

Multiclassing with Vampiric results in you becoming a Dhampir.

Prerequisites. To qualify for multiclassing into the Vampiric class, you must meet these prerequisites: Dexterity 13

Proficiencies. When you multiclass into the Vampiric class, you gain the following proficiencies: Finesse Weapons