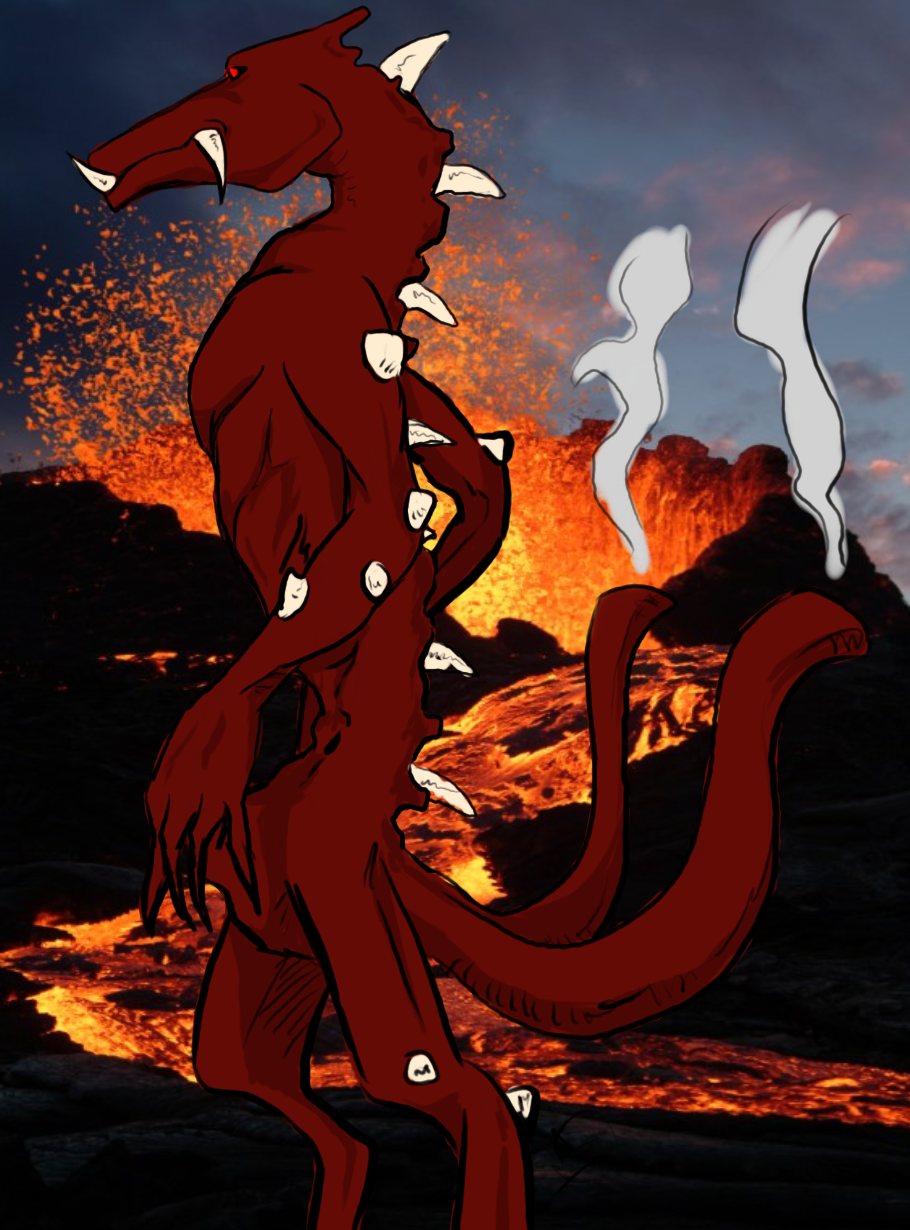 Valados are tall beings with a slender and crooked build. They may seem to have misaligned spinal parts or weirdly angled limbs as a result, like a tree. They have dark reddish brown skin with thick white spikes along their spine. Their face is a long snout, with short thick upper and lower fangs protruding out, making them appear reptilian and even draconic to an extent. At the end of their spine is are two slender tails from the same stem, a double-tail. They have slender, long arms and legs with small studs of protruding bone along the forearms, shin, and elbows.

The valados were birthed from a large entity known as the infinite flame, which takes the physical appearance of a volcano in the material realm. The valados are just another part of the great cycle initiated by this entity. The infinite flame has buried entire kingdoms under flame and lava, yet new life always rises from the pumice and ashes, like the valados did.

The valados are a vicious and merciless warborn race that praise the strong of their tribes and consider all other races and culture fodder for the infinite flame. They get this trait possibly from the fiery tempestuous flames they were birthed from. Though lithe-looking, one would be foolish to underestimate valados, as they are quite strong for their appearance. The valados have commonly waged wars and pillaged other races as a result of their feeling of superiority. They are a rather feared race and have a very well known face to go with that reputation.

The valados live as free chaotic individuals. They reside in tribes just to have strength and numbers and do not usually operate with emotion toward another in their tribe. Because of this, a unifying culture that defines valados is near non-existent, with the exception of their infamy for causing chaos and death to any who cross their path. The valados have no emotional connection with one another and have no sense of respect or honour, using the ends to justify all means. A valados would kill its father within a heartbeat and never regret it, given the right reasons. However, some valados on rare occasions possess a minute sense of civility.

They are just generally sadistic evil creatures, and just super selfish and evil. Often in their tribes, they will hold brutal contests amongst their own to test and display strength. These contests are no-holds barred and many resort to underhanded tactics due to their honorless code. When vanquishing enemies, valados are particularly ruthless and will often pillage and kill pleading survivors after having their fun with them.

The valados are not particularly religious but worship the sole figure of the infinite flame, whom they praise as their god, creator and destroyer. The infinite is the central figure in what the valados consider the cycle of conquest. Things are destroyed and fed to the flame and the bounties reaped are repurposed to reward the valados. A niche following of this religion writes that eventually, the valados will be able to rejoin their deity in greatness as the rightful, loyal servants they are. This may just be another part of the cycle.

When having achieved victory, valados are known to praise the flames name. There are no specific rituals associated with their practices. The valados are known to perhaps associate their violent acts as offerings to the deity. Slaughtering other races and towns is similar to sacrificing for them. A common cry for their conquest is "Burn to the Flame!!"

First names are definitions of character for the valados, and surnames are secondary descriptions. These names come from an island sort of dialect that may have had Ignan or even Infernal influences. Surnames are chosen by individuals and can change based on the day. Usually, they describe something they like as a sort of introduction. For example, a valados that likes oolong tea and is named Riphtesh might call himself Riphtesh Oolong. But when his tastes change to macarons, he might call himself Riphtesh Macaron.

Vicious creatures born of flame that will turn on their own if needed.
Ability Score Increase. Your Dexterity score increases by 2 and your Constitution increases by 1.
Age. The age of maturity is 8 while the life expectancy reaches around 70 for the average valados.
Alignment. All valados are chaotic by nature and few are not evil.
Size. Valados are a tall race that stand from 7 to 8 feet. Your size is Medium.
Speed. Your base walking speed is 30 feet.
Darkvision. You can see in dim light within 60 feet of you as if it were bright light, and in darkness as if it were dim light. You can't discern color in darkness, only shades of gray.
Valados Resistance. You have resistance against fire and poison damage. You also are considered immune to the effects of Extreme Heat, as written in chapter 5 of the DMG.
Bolstered Constitution. You have advantage on saving throws made against being poisoned.
Constricting Ash. Valados make use of ashes that flake from their bodies, a gift of the flame. You can make a ranged weapon attack targeting a creature within 30 feet and subject them to a Constitution saving throw. The DC is 8 + your proficiency bonus + Constitution modifier. This trait cannot affect undead or constructs. If the creature fails the saving throw they are restrained until the end of your next turn. You can use this feature a number of times equal to your proficiency bonus and you regain all use of this trait after you finish a long rest.
Languages. You can speak, read, and write Common and either Primordial (Ignan) or Infernal.