If you have any question about D&D Wiki, D&D, formatting on D&D Wiki, what day today is, or whatever, an admin will, many times, give a good answer. Please feel free to ask any admin any question (ask Green Dragon a question!).

Formatting on D&D Wiki (or any wiki for that matter) can be very difficult, and if you need help a good place to start is Help:Editing on Wikipedia (or even their Introduction page). This will explain the basic wiki formatting and should provide quite a few useful links that explain more specific areas of wiki formatting. Again, if you have any questions about formatting on D&D Wiki please ask them as, I imagine, anybody will be more than happy to help you get them answered.

A strong and welcoming community exists on D&D Wiki, and I am sure you will find it rather nice. Most discussions take place on content talk pages and user talk pages. Anyway, on D&D Wiki, possibly since discussions are never deleted, people try to be nice. This means please follow Wikipedia's guidelines on Civility and Etiquette when discussing anything. Also, on a pretty different note, to ensure people know who posted what, please sign your name after a post with four tildes (~~~~) or by clicking on the signature icon.

This will automatically produce your name and the date. Anyway, I hope you come to love the close-knit D&D Wiki community and welcome againWelcome, you are now a D&D Wikian. Jwguy (talk) 05:21, 20 March 2014 (MDT)

How would I go about embedding an image with an external link? You'll have to forgive me for my inexperience, I've never edited a wiki before and the tutorials I'm using are way unclear... Cancelion (talk) 10:34, 22 March 2014 (MDT)

Here's a mini-tutorial! At its simplest, you just put in the address. 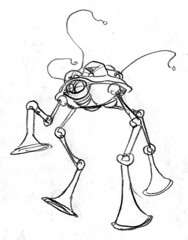 To right-justify it and make a nice frame and caption, do:

I'm willing to help, too! I usually try to use creative commons images, but lately, I've been having luck contacting the authors of some pictures. Most seem fairly happy with the request, though I also promise to have the image linkback to their original posting of it, which goes a long way to communicate your desire to use it within fair use, I feel. Jwguy (talk) 04:28, 23 March 2014 (MDT)

Yup, it's a completed piece. It'd be really cool to have it in the magazine. I went through it just to check, but if I missed any spelling errors or the like, feel free to fix those :) Cancelion (talk) 01:29, 23 February 2016 (MST)

Heya, with regards the Fiendish Ogre, I'm making a slight adjustment for the purposes of the magazine and removing the snatchpole, I'm unclear what the Attack and Full Attack lines should be - I'm not sure what the "//" denotes.

Removing the snatchpole is a pity, but makes sense. The "//" in the attack lines indicates different weapon loadouts: "Longsword +2 melee (1d8+2) // club +2 melee (1d6+2)" would thus mean that there are versions of the creature equipped with a longsword and versions with a club. This is terribly unclear, though; perhaps just show the most common loadout and then mention the separate weaponry in the text (although your version is also quite clear)?

Thanks. There's a mancatcher in a WotC book somewhere, I'll refer the reader to that as a DM option: I just want to avoid introducing new equipment here :) Marasmusine (talk) 05:35, 24 February 2016 (MST)

Okay, it's in the magazine, you can see it at http://1drv.ms/1Q7p0kw (scroll down, it's the last section). I made the following changes:
I'm still figuring out the best way to credit people. At the moment there is an "author index". How would you prefer to be credited - a byline with the adventure itself, or a link to the wikipage? All of the above? Marasmusine (talk) 03:56, 26 February 2016 (MST)

That looks absolutely gorgeous. The only things that come to mind are that links to (or stats of) Rakabarr and Urabarr are needed, since they're encountered in the quest, and that the references to bulezau I seem to have forgotten in the text should be changed to goat demon (I've fixed it in Bloodgate Keep (3.5e Quest) just now). As for the credits, I'm quite happy with being mentioned in the author index; I wouldn't mind a name-drop byline in the quest itself, but that's hardly necessary :) Cancelion (talk) 06:20, 26 February 2016 (MST)

Word up, Cancelion. Unfortunately I have come to find you in a spat of vacuous comments, so do simply revel in meaningless joy with me. Just wanted to say thanks for very dedicatedly fixing all y'breadcrumbs 'n stuff, though I realise it's largely your own stuff (which is also great, for the record. I'm gonna find a technical fault in it one day.) I know how easy it is to lie back and not worry about the tedious things, then me or Maras would've cleaned it up some day in the next 10 years. Us *lions gotta stick together! --SgtLion (talk) 05:50, 24 March 2016 (MDT)

Thanks man, appreciated! I try to fix any similar errors that I run across in other articles, but I tend to leave my own little YoG niche very rarely :P <foo>lions FTW! Cancelion (talk) 06:10, 24 March 2016 (MDT)

P of T: It seems there is chickens in the darndest of places. Sir G of T when frustrated with players who did nothing but bicker at each other or some game online he would yell out "GIANT CHICKENS" and to everyone's surprise, they would forget for a moment what they were arguing about and ponder for a moment on what just happened and then often bust out laughing. So in his memory, I had to add a "giant chicken" since ever since that became known of him, we have seen giant chicken references appear in video games and even some movies, and we cant help but to laugh.

No matter how funny an in-group joke of yours is, that doesn't mean an article on mundane trade goods should make reference to it; since no one else is savvy to the joke, it just comes off as strange. As for commenting: you can use a number of colons (like I have at the beginning of this comment) to indent your comment by a step. This makes the division of comments clearer. Also remember to sign your comments with four tildes (~~~~), as per the wiki rules. Cancelion (talk) 23:43, 11 April 2016 (MDT)

G of T: Regardless the chicken thing was funny. Technically having a giant chicken flock could seriously run amok an entire village as those things eat anything they can kill. A lot of people throughout the world have understood the chicken joke and even some youtubers use chickens as mascots, even if they don't fully remember the source, since, people forget and things change. It doesn't matter as I appreciate the thought. I don't play video games now as that is a waste of money that does no good any further since Microsoft/sony etc changed how things work, all my collections of 1000's of games are all but useless now, as is the dlc for each of them.

Now as for the signature/rules, not sure to what your referencing personally, since it doesn't take much effort to source out who said what and when here, thus not an issue. HOWEVER I would not mind it, as it looks nicer, it just seems rather frivolous and unnecessary fluff. I look into it and see if it works for me. Ah I see TierArea (talk) 12:57, 12 April 2016 (MDT)

Regardless the word is 'should' and not 'MUST'. Besides, I already lived, and bled fro this country, and will eventually die because of the injuries, so will remain free and not dictated to unless I find it 1) good for the environment, 2)Good for me and my survival, 3)and good for other intelligent people. However intelligent people don't need so much....so there you have it.

If you don't understand the point of signatures and indents, I'm not going to fight you over it. Just remember that you're not the only person on the wiki, and everyone is entitled to understand your communication. Cancelion (talk) 13:13, 12 April 2016 (MDT)