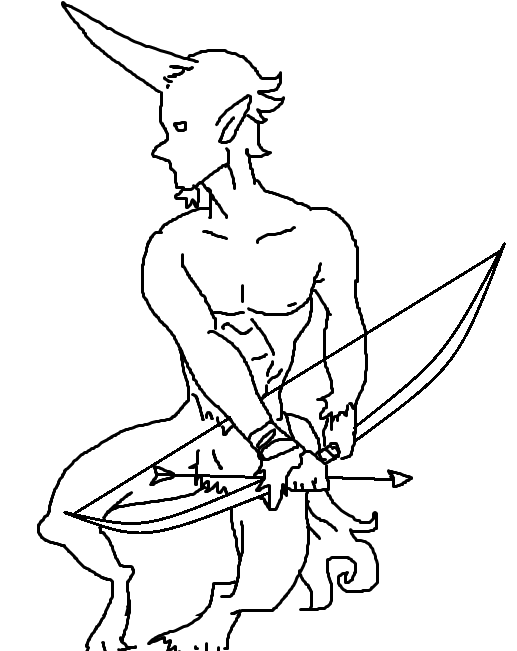 The unitar is, despite the name, not a centaur of a unicorn and a man. They are physically more alike to satyrs, having the lower half of a horse. A unitar has the upper body of a human, and they have a single horn like a unicorn's atop their forehead. This horn is known to have healing and magical properties. They have long hair like a horses' mane that goes down midway to their backs, and this hair can be a variety of odd colors like blue or pink. Despite the freakish appearance, unitar usually have very handsome or beautiful faces and lithe bodies. Their humanoid top half usually have a thin layer of peach fuzz that is the same color as the hide of the lower unicorn half. This is usually golden or white, but can be the rare black sometimes. The human skin part is usually pale. They have slightly pointed ears and a long horse tail, as well as eyes people describe as "neon rainbows of sparkles." Male unitar always have some scraggly beard. Both male and female unitar have tufts of hair that grow on their wrists.

The unitars came about as the result of mass bloodshed from the wars between mortals, celestials and fiends. Humans, desperate for any inch in the wars, would drink the blood of unicorns, believing it to be a charm against death. Indeed, it would provide longevity, but at a terrible price. The goddess of the unicorns, Lurue, saw the horrendous deed they committed and placed a curse on them. Entire platoons which partook of the sacred ichor first reported symptoms of rage and growing madness among their camps. People would bray like animals and wantonly go into bouts of destructive anger. Soon, they developed splitting headaches and a bulge in their skull became prevalent. Next, they became lame and unable to walk as a result of their legs shattering and twisting about painfully in their sleep. By the end of the transformation, they would be come the unitar.

After the war concluded, those who became unitar scattered across the realm. The curse did not make them benevolent creatures like the celestials which they drank the blood of. Instead, they were more like monstrosities, similar to centaurs. For years after, they tormented towns with their fits of aimless rage, attacking innocents and stealing away civilians. Unitar are regarded as a menace by many as a result, and at a point, they were nearly hunted to extinction with the combined efforts of human kingdoms. A small band of unitar sought refuge within an abandoned shrine of Silvanus, who took pity on them and alleviated the mental fog of anger. Grateful, that band of unitar pledged to devote their strength to protecting nature alongside Silvanus' druids. They marked a new age for their race, as the wild unitar eventually came to be hunted of existence. Now, only the descendants of those blessed by Silvanus remain, and they still protect his forests to this day.

Lurue, goddess of the unicorns, has never forgiven the unitar for the grave crime they committed. However, she grudgingly acquiesces to the will of Silvanus in his forest territory. Elsewhere in the world, the unitar cannot be guaranteed safety from Lurue's forces of intelligent and talking beasts, who seek to often harm unitar. Thus, most unitar today reside exclusively within the wooded domains of the nature god, and rarely venture out, for fear of punishment. They live in tribes of hunters that patrol the forests and monitor nature's health. Unitar worship Silvanus as their savior patron deity, and often offer side tribute to Lurue in hopes of one day appeasing her wrath. Some unitar do venture out of the nature god's saftey, often with the intense desire to do more for their god. They will usually go to other forests to protect it, despite the danger such a journey may pose.

The unitar male takes names often with hard sounds like "c" and "k." Females are more likely to use softer syllables with a mix, like "s."

Half human, half unicorn
Ability Score Increase. Your Strength score increases by 2, and your Charisma score increases by 1.
Age. Unitar mature around 30 and live to about 300 years old.
Alignment. Like unicorns, they are chaotic. In regards to Silvanus, they abide by his laws, but will do anything to protect his domain.
Size. They average about 5 to 7 feet tall. Your size is Medium.
Speed. Your base walking speed is 35 feet.
Darkvision. You can see in dim light within 60 feet of you as if it were bright light, and in darkness as if it were dim light. You can't discern color in darkness, only shades of gray.
Unicorn Blood. While you are cursed, you did gain something from the sacred blood which now courses through you. You have advantage in saving throws against being charmed or poisoned.
Magic Horn. The horn on your head is imbued with innate magic. You know and can cast the cure wounds spell as a 1st-level spell, without material components. You must finish a short or long rest to use this trait again. Charisma is your spellcasting modifier for this spell.
Gore. Your horn is a lethal weapon with which you can make unarmed strikes. If you hit with it, you deal piercing damage equal to 1d6 + your Strength modifier.
Celestial Charm. As a bonus action, you can power your horn to its magical capacity. For 1 minute, all damage dealt by your Gore is considered magical.
Languages. You can speak, read, and write Common, and Sylvan.