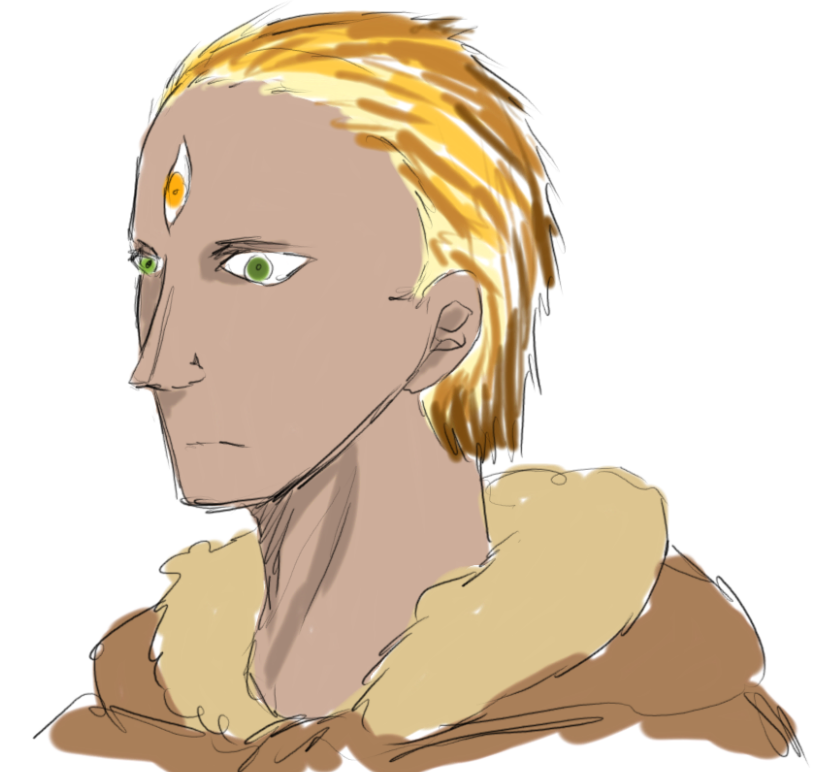 These three eyed creatures are rumored to be able to see the future at young ages and lose this ability when they mature. Many only see them on their travels into the mountains and on trading routes. Taller than most humans, they range from 5'11 to 6'8. Their skin is usually sun-kissed tan, and their hair, a dirty blonde to a deep brown. Their eyes shine bright like peridots, and their third eye embedded in their forehead is a deep amber colour. They tend to keep their hair short to their scalps, and oftentimes are very muscular.

Their clothing is usually very sheer during the hotter months, and often show off more skin than most find to be desirable. During the winter, they bundle themselves up with furs. They tend to try and stay fit, and most of them have ectomorph and mesomorph bodies. They live for a few decades if they are healthy, almost reaching up to 120 years. They age like elves, and oftentimes their bodies do not mature past 40.

They are shrouded in mystery and confusion. Having fought in no major wars, they have only existed in rumours. Tritomatis spend their time in the mountains, tending to their crops and villages. They have only been in one violent argument, and that was over territories with the humans of the Southern Isles. It resolved itself without a major war but a single battle proved the tritomati agile and avid tacticians of conflict.

They are becoming more well known for their trading, agriculture and fighting styles. Tritomati historically have just been a passing thought that is occasionally glimpsed. They are amicable and well known to practice sustainable agriculture, which they sometimes teach others.

They live in the mountains of the frontier down south. They had made deals with the humans of the land, they would remain in the mountains, and the humans would live on the more flat land. Most of the men are traders, and the women stay at home and take care of the children, crops and chores. The women are valued and idolized in the village, and are seen in the same light as the warriors. Women who die in childbirth are treated like the warriors who die in battle, and the burials consist of being buried with dragon teeth. Common burials consist of being buried with bear intestines and a bear pelt for good luck in the afterlife.

A ceremony that has been done for generations is the Choosing. An adolescent tritomati will choose which eye set they wish to use. Depending on their job of choice, they will pick the eye set they think will be most helpful. Most choose the third eye, and go blind in the ‘mortal set’ or other two below. The ceremony consists of burning the other eyes beyond use. Their parents then would tie a cloth that had been soaked in basil, thyme, and lavender for good luck and success. The adolescent would then move from the village to try and make it on their own. Upon returning, they would get the cloth removed and a clean one put on. The adolescent is now an adult. This ceremony usually lasts up to a week.

The tritomati have a natural charismatic streak, and are proficient in melee weapons and light armor. Not many of them train for more than being a village warrior and rarely venture much farther than the base of their mountain. They usually resort to trying to talk their way out of fights and issues, and most of the time it works. Their everyday life mostly consists of learning what they can and trying to get by.

Tritomati societies are governed by a chief of the tribe. Once a chieftain or chieftess passes, they will vote a new one in their place, anyone is allowed to be voted in as long as they have made it through the choosing ceremony.

Their diet mainly consists of meats and slight vegetation. Berries and common herbs are an everyday part of life and they spend hours a day hunting for themselves. Game is a fairly popular sport for young tritomatis.

Tritomati tongue is very similar to humans. They have more variety of names that suit their mountain background.

Enigmatic three eyed humanoids
Ability Score Increase. Your Strength score increases by 2, and your Charisma score increases by 2.
Age. Tritomati mature much like elves and genasai, not physically aging passed 40, but can easily be 120
Alignment. Tritomati typically rely on their own judgement for their actions and have a strong moral compass. It is rare for a tritomati to be evil.
Size. Tritomati tend to be similar in build to humans. Although tritomati tend to be taller and weigh slightly less than humans, they are very muscular. Your size is Medium.
Speed. Your base walking speed is 30 feet.
Darkvision. You can see in dim light within 60 feet of you as if it were bright light, and in darkness as if it were dim light. You can't discern color in darkness, only shades of gray.
Combat Trained. You are proficient in two melee weapons of your choice.
Forager. You are proficient in the Nature skill.
Languages. You can read, write, and speak both Dwarvish and Common.