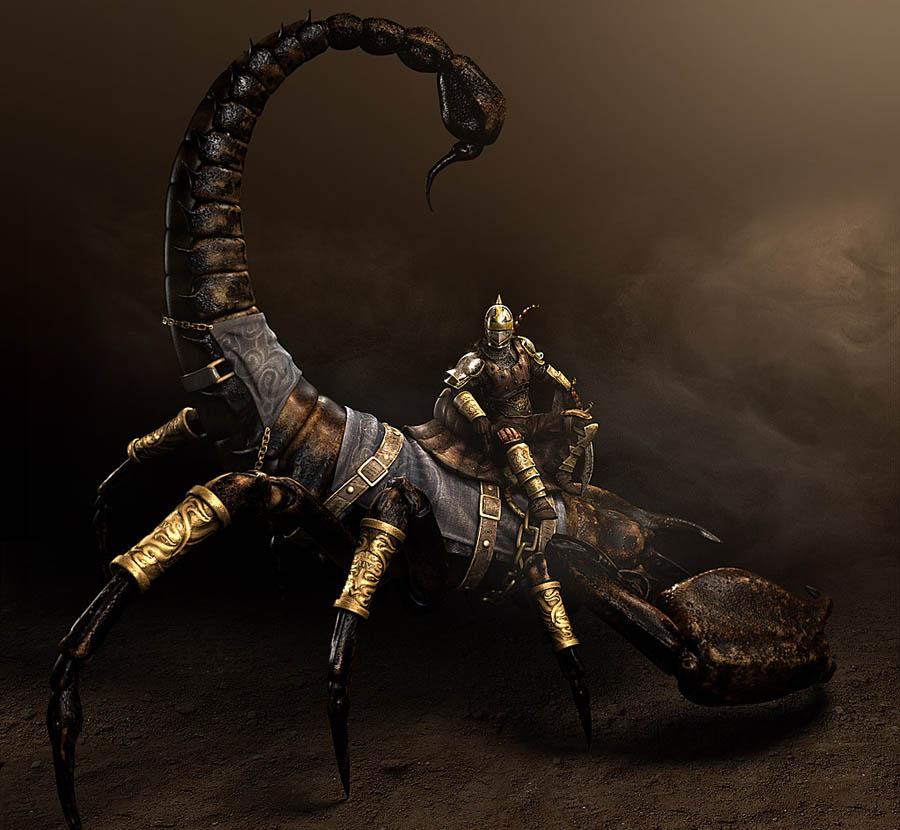 A thrallian cavalier upon his mount

Along the dunes and in the sands of Valgora's desert regions live the civilized people who have made the shifting sand their home. These people have learned to revere and respect the waste creatures who they live alongside. Some of the desert-faring races even begin to empathize with the creatures, and it is possible for two to share a great bond.

This is were the members of the Thrallian Cavalry are born. The desert races of the wastes and their hardened companions form a sacred sand bond and assist each other in keeping the deserts safe from all types of waste hazards.

Characters at home in the heat are the first choice to become Atlantean Cavaliers. Races capable of surviving the harsh conditions, such as bhukas, baddlands dwarves, and sand humans are the most viable for the class. A character ready to join the ranks of the cavalry should be able to handle the wild elements and animals of the desert. A character may seek to become a cavalier to become a master of mounted combat.

All the following are class features of the thrallian cavalier.

Sand Mount (Su): When the cavalier gains his first level in the thrallian cavalier prestige class, he tames and trains a animal at home in the sands and dunes of Valgora. The mount is immune to light effects and can speak, understand, and read any languages that the cavalier can. The mount is no longer mindless, but is ridden as a creature of Intelligence 1 (see below). The available mounts for a cavalier may vary depending on the specific campaign or dungeon master's digression, but generally can be chosen from the following: at first level: camel, horse, medium scorpion, or a jackal. At third, sixth, and ninth levels, the cavalier may choose to change animals, and at each specific level the chose of arctic creatures grows. At third level: war camel, warhorse. At sixth level: dire camel, dire horse, large scorpion, or a hippopotamus. At ninth level: huge dire scorpion, dire war camel, dire warhorse. A cavalier may choose not to change his mount, at which point the mount is treated as having the characteristics of it's same animal one size category larger and all its stats increase by 1.

Sand Protection (Ex): At 2nd level as a swift action, the thrallian cavalier can use Protection from Dessication spellSW The cavalier's mount is considered to be under the effects of the spell as well.

Summon Sandkin IV (Sp): At 5th level the thrallian cavalier can use summon monster IVMM to summon a waste creature of appropriate power as a spell-like ability once per day (with a caster level equal to the character's thrallian cavalier class level).

Master Rider (Ex): At 6th level, the thrallian cavalier does not suffer penalties to AC due to charging while mounted on a sand mount, and only takes half of the normal penalty to ranged attacks due to being mounted.

Summon Sandkin V (Sp): At 7th level the thrallian cavalier can use summon monster VMM to summon a waste creature of appropriate power as a spell-like ability once per day (with a caster level equal to the character's thrallian cavalier class level).

Sand Knight (Ex): While riding a sand mount, the thrallian cavalier gains a +2 competence bonus to attack rolls and AC.

Summon Sandkin VI (Sp): At 9th level the thrallian cavalier can use summon monster VIMM to summon a waste creature of appropriate power as a spell-like ability once per day (with a caster level equal to the character's thrallian cavalier class level).

Sand Calling (Sp): At 10th level the thrallian cavalier can use call stormSW as a spell-like ability once per day (with the caster level equal to the character's atlantean cavalier class level) to call forth a powerful sandstorm.

Sand Mount (Ex): At 11th level and every second level thereafter, the sand mount gains two Hit Dice. The hit dice should be taken from the base creature's racial die found in the Monster Manual or other appropriate books, namely Sandstorm.

Sand mounts have the following game statistics (on top of their base racial statistics).

All the following are class features of the sand mount.

Sand Mount Traits: The sand mount must either be a cunning scout or a desert hunter, but with the Dungeon Master's permission, it may be a specific desert creature not mentioned above. Use the base statistics for a race of the mount’s kind, but make the following changes.

Natural Armor: The number noted here is an improvement to the sand mount’s existing natural armor bonus and both stack.

Attacks: The sea mount can make multiple attacks with his bite (or tail attack depending on the creature) attack as if it where a manufactured weapon, with a -5 penalty to each extra attack. The mount cannot use its gore ability (if it has one) while making multiple attacks.

Size: Unless chosen by the player and approved by the dungeon master, the sand mount is the same (where appropriate) or one size category larger than the cavalier. If a cavalier chooses not to change animals for their base mount at the appropriate levels, the creature's stats improve as if one size category larger than it truly is, however it's true size does not alter.

Ability Scores: The sand mount's ability scores are chosen using the elite array, replacing the 10 and the 8 with the cavalier's Intelligence and Charisma scores, which the frost mount shares. The racial ability score adjustments, Armor Class and attack modifiers and bite damage due to size for the sand mount are shown on Table: Sand Mount Adjustments by Size. For details on sand mounts see the thrallian cavalier's specific chosen creature's base statistics in it's source book (typically the Monster Manual or Sandstorm).

Optionally a Dungeon Master may allow their player to roll 4 sets of 4d6 discarding the lowest die and arrange the results among the sand mount's Strength, Dexterity, Constitution, and Wisdom scores.

Unbreakable Sand Bond (Su): The sand mount shares a bond with his cavalier rider that transcends the physical. The mount assumes the rider's alignment. If an thrallian cavalier dies, the sand mount dies 2d10 days later as a result of depression. If the sand mount dies the cavalier must attempt a Fortitude saving throw of DC 25. If the saving throw is failed, the cavalier loses 2 hit points per thrallian cavalier level. He will then go into a rage for 1d12 + (her Constitution modifier) rounds as if he was a 1st level barbarian.

At all times, the sand mount and cavalier can communicate empathetically and telepathically, see out of each others eyes, and can locate each other as if by the locate creature spell.

Shrink (Sp): 3 times per day at 3rd level, the sand mount can reduce its size to any size category smaller than itself as a swift action. This spell-like ability lasts until the mount decides to end it, which it can do as a free action. The caster level is 1 for this ability. This ability works like a stackable reduce person.

Evasion (Ex): If the sand mount makes a successful Reflex saving throw against an attack that normally deals half damage on a successful save, he instead takes no damage. Evasion can be used only if the sand mount is wearing light armor or no armor. A helpless sand mount does not gain the benefit of Evasion.

Share Spells (Ex): At the thrallian cavalier's option, he may have any spell (but not any spell-like ability) he casts upon himself also affect his sand mount. The sand mount must be within 5 feet of him at the time of casting to receive the benefit. If the spell or effect has a duration other than instantaneous, it stops affecting the sand mount if he moves farther than 5 feet away and will not affect the mount again, even if it returns to the atlantean cavalier before the duration expires. Additionally, the thrallian cavalier may cast a spell with a target of “You” on his sand mount (as a touch range spell) instead of on himself. A thrallian cavalier and his mount can share spells even if the spells normally do not affect creatures of the companion’s type [magical beast (augmented Animal)].

Slippery Mind (Ex): If a sand mount with slippery mind is affected by an enchantment spell or effect and fails his saving throw, he can attempt it again 1 round later at the same DC. He gets only this one extra chance to succeed on his saving throw.

Adventure: Thrallian cavaliers usually adventure around the deserts of [{Valgora (DnD Campaign Setting)|Valgora]], patrolling the dunes and meeting the wild creatures of the wasste. They also adventure in order to fulfill a task appointed to them by their people, or to find new candidates to train in the art of the thrallian cavaliers. Neutral thrallian cavaliers are rather obscure in their purposes. Their objectives are not known.

Characteristics: Thrallian cavaliers are totally obsessed with the wild sands of the world - their minds, bodies and souls are tied to the oceans.

Thrallian cavaliers rarely stop thinking about the desert or their sandkin in some way (even if it is just a corner of the mind considering some dune theory), and they often weave waste-knowledge into conversations simply because they can't help it! They simply love the desert and it's denizens with their hearts, minds and souls, and can't imagine others not doing the same to some degree. A thrallian cavalier's idea of impressing someone is showing off their knowledge of the wastes. Because of this obsession, most thrallian cavaliers marriages are to another cavalier or to a member of a waste race or settlement.

Races: The desert citizens of Valgora are the most likely in all the world to become thrallian cavaliers. This includes the reverent humans of the Vargach Valley, the sand dwarves of Thrall's Desert, and other races tied to the shifting sands.

Combat: The thrallian cavaliers takes the party role of a fighter and fast-attacker. Their skill in arms and their sea mounts make them ideal front-line fighters. The sandkin's speed makes them excellent at fast attacking and getting where they are needed.

Characters with ranks in Knowledge (local) can research thrallian cavaliers to learn more about them. When a character makes a skill check, read or paraphrase the following, including information from lower DCs.

Thrallian Cavaliers in the Game[edit]

Adaptation: If not in Valgora, simply call members of this class Desert Cavaliers or replace them with a desert region or country in your own campaign's name. Thrallian is the class's Valgorian main name, named after Thrall's Desert.

Sample Encounter: If the PCs enter the deserts of Valgora, they may chance upon Bamidele at the dungeon master's digression.

EL 11: Bamidele, a thrallian cavalier, guards a hidden ruin in the sands of Thrall's Desert. He will attack any and all intruders (unless they immediately show peace, allowing them on the site) dealing non-lethal damage. If successful, he will imprison the individuals for questioning and send them to his land-dwelling associates in the Talaran docks.