The Saving Throws section is a bit unclear. Do you get Int and one of Con, Wis and Dex? Or do you pick one from the four of them?

This is a really interesting class that I've been play-testing and I came up with an idea to balance a few things and then I just ended up rewriting the majority of the class and I would like some thoughts on it. The full descriptions will be included after the changelog so you have an idea of what is different. Apologies for any formatting errors, this was originally done on a google doc so some things may be a little disorganized.

Class Features As a Soul Warden you gain the following class features.

Equipment You start with the following equipment, in addition to the equipment granted by your background: 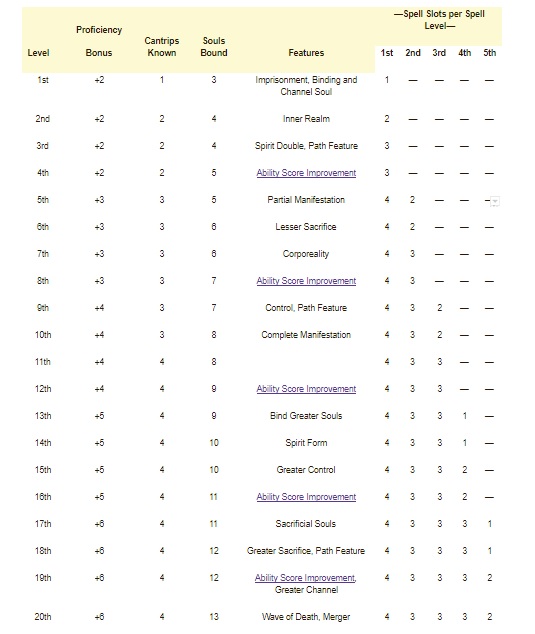 Choose Your Path At 3rd level, you select one of the two paths a soul warden must follow, The True Jail, or One Man Army. You gain additional class features at 9th and 18th level.

-When used, as a last resort, the caster can use their own soul as a shield. The shield can be any size up to a circle with a 300ft radius. The shield hitpoints are equal to your soul warden level x 10d20 + Charisma modifier for each soul warden level. If this shield breaks, then so does the casters soul. This counts as an instant death.

Soul Warden Spell List You know all of the spells on the basic Soul Warden spell list and additional spells based on your archetype. Cantrips

Cool rewrite! I honestly prefer what you have up there because it seems the class features have been changed a bit more again (at first glance). I think the stubs are outdated.--Yanied (talk) 15:01, 13 June 2019 (MDT)