Birds of a Black Feather[edit] 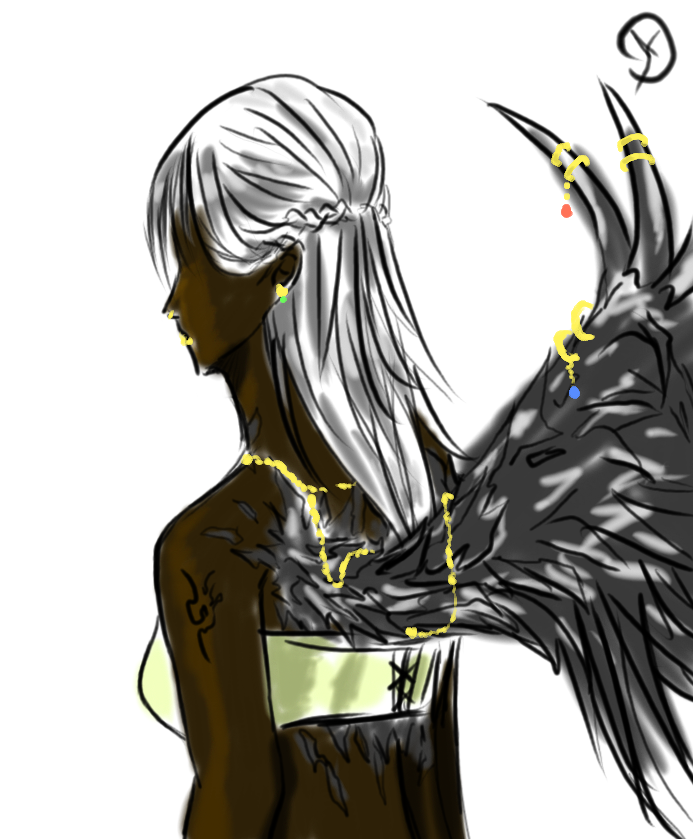 Sukkan-alsama, otherwise known colloquially as sukama, are humanoid creatures. Their body for the most part is similar to a human, with humanoid faces, arms and legs. Most sukama have lithe and toned builds, with darker hued skintones. Their eyes are usually blue or gold and their hair ranges from pitch black to platinum silver, with varying levels of frizz. Like humans, sukama grow body hair on different areas depending on their sex. Their defining feature is a pair of black wings that sprout out from their shoulder blades. The wings seem to grow out from a base made of tiny metal plates, which form the structure of the wings, ending with pointed metal pieces at the bend. These wings are sleek and resemble that of a raven or crow's, sometimes earning the sukama the name of raven people.

In order not to burden their wings, sukama usually wear little to no clothing on their torsos. Females will ear just enough to be decent, while males will often be shirtless. They like to decorate their wings as a show of status. This is mainly pertaining to full-fledged fliers, however. Unless a sukama extensively trains their wings, they won't ever be able to get off the ground. This is because the wings at birth are unable to fly due to the metal structure. Without decent training, several sukama only have wings for show.

According to the sukama themselves, they are a force of the divine, similar to the deva, or aasimon. They descended onto the Material Plane to absorb impurities, thus turning their wings heavy and black, making it so they can never rejoin their celestial brothers and sisters. Their full racial name, sukkan-alsama, means "the population of heaven's army." It is believed that they may have some relation to the otherworldly good, like aasimar, but they are more material, so perhaps some part of their story is true. In skeptic circles, the sukama are dismissed as misled failed experiments by some evil cult.

Sukama means "having good desires." This is central to the ideology of sukkan-alsama and their society. One's intentions are what matters. They are not utilitarian and frown upon the mentality that the ends justify the means. Of course, this also means that they are overly sympathetic with people who do bad things but have good intentions. The sukama generally see themselves as enforcers of good in the Material Realm, as they are a heavenly army by name. They are proud of this purpose set upon them and are a little condescending towards others with less virtuous aims. Like an army, they band together in platoons, which double as family units.

Sukama names commonly derive from Arabic and Sanskrit, or Midani and Jannti, if you want to speak strictly fantasy. They share names of the Bedine peoples of the Anauroch regions.

The Sukkan-Alsama are a race of winged humanoids with claws on wings.
Ability Score Increase. Your Dexterity score increases by 2, and either your Charisma or Wisdom score increases by 1.
Age. They reach maturity at 300 years, and have been known to live a millenia. No one has eve seen one die of natural causes since they usually die in battle, so the real length is unknown.
Alignment. They tend to be chaotic and good, but they are not immune from material lulls that turn them for darker natures.
Size. Sukkan-alsama vary widely in height and build, from barely 5 feet to well over 6 feet tall. Your size is Medium.
Speed. Your base walking speed is 30 feet.
Darkvision. You can see in dim light within 60 feet of you as if it were bright light, and in darkness as if it were dim light. You can't discern color in darkness, only shades of gray.
Clawed Wings. Starting 5th level, you have trained your wings enough that you can fly, and you gain a flying speed of 40 feet. If you are wearing armor you are not proficient in, medium, or heavy armor, you cannot use this speed.
Additionally, your metal clawed wings are natural weapons which you can use to make unarmed strikes when you're not using them to fly. If you hit with them, you deal slashing damage equal to 1d4 + your Strength or Dexterity modifier.
Heaven's Knowledge. As one of the proud members of the celestial armies, you know your share of gods and their lore. You are proficient in the Religion skill.
Boastful Pride. With your immense pride, it is hard to scare you. You have advantage in saving throws against being frightened.
Fell Senses. You has lost most of your celestial powers in the line of duty, purging the world's filth and absorbing it. However, you are therefore more trained to espy trickery. You have advantage in Intelligence (Investigation) and Wisdom (Perception) checks to spot traps and see through illusions.
Languages. You can speak, read, and write Common and Celestial