The horrific soulrippers are ancient weapons created by alchemists. They can twist themselves to look like humans and sit right next to you... by the time you notice you're already dead. 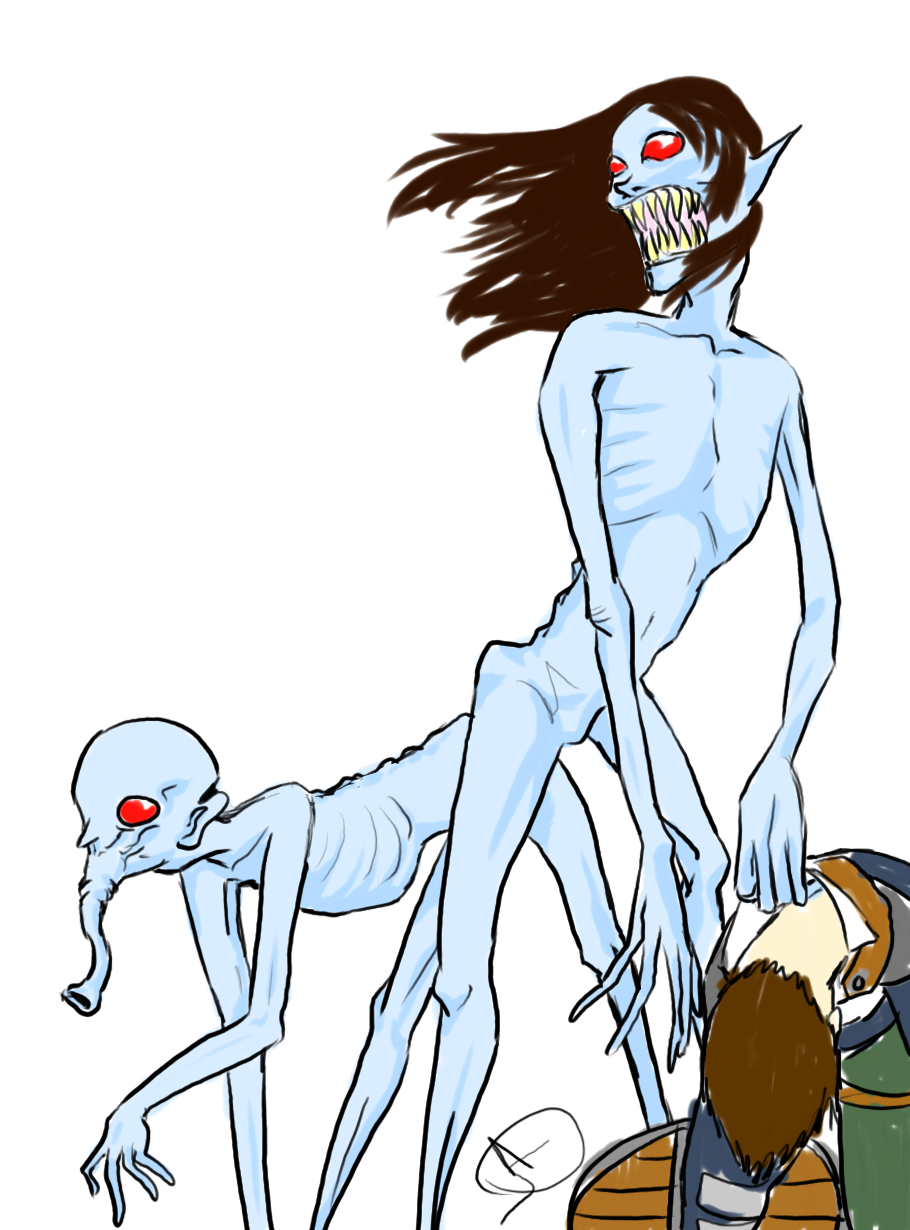 Soulrippers, or “deathstarers”, as they are commonly known by, are monsters born to alchemy which have continued breeding until they became the common horrors they are now. In their natural state, they appear as tall humanoids with skeletal appearances, usually walking and running on all fours. They have glowing red eyes and blue skin that looks as if it was painted on the creature's bones and muscles. The males are hairless and have tube-like protrusions ending in a sucker in place of a mouth. The females have hair on their heads and long pointed ears. Females have humanoid mouths with thirty sharp teeth. This is how they look normally.

Both male and female soulrippers can appear human to get closer to prey. In this form, they can appear like any human which they have known and memorized the form of down to their final distinguishing details. When in this form, soulrippers are very good at acting like the human they are imitating.

Thousands of years ago during a devastating war, alchemists created soulrippers as a way of killing the enemy in an alien and mysterious way without being caught and killed. Thus soulrippers were given amazing deceptive abilities that allowed them to be apt assassins. They could take the shape of humans and murder opponents. They were also gifted in pretending to be what they were not and were very persuasive and deceptive. They were manufactured in the realm of fiends and darkness in dark alchemical facilities.

After the war, soulrippers almost went extinct because the alchemists tried to rid this scourge they created in horror. They fled to the material plane, where they were easily able to disguise as humans and retain safety. As time went on, they began to repopulate due to the fact that they can breed with humans and produce more of their kind.

Soulrippers usually live among humans in low positions, posing as beggars and merchants to ambush human prey while they walk by without a second glance at them. Their amazing abilities of deception made them nigh imperceptible to average humans. When they bothered to talk and not just murder outright, soulrippers were very good at deflecting all suspicions from themselves. Very rarely will one actually use the power they have for good but those that do almost never form into humans to avoid being found hiding and prove their good will.

Soulrippers usually are solitary creatures but can form cohesive units if needed. They move as packs then and can coordinate and cooperate to a deadly degree, however, they do this without much attachment to each other. They show less charisma towards their own race than they did that of humans which they stole the forms of.

Soulrippers have no names of their own. They're given to them by others of their kind which is similar to a human call sign.

As a soulripper you can drain the life out of a creature with your deathstare.
Ability Score Increase. Your Charisma score increases by 2 and your Dexterity by 1.
Age. Soulrippers reach maturity at 18 and live up to 1000 years
Alignment. Typically, soulrippers are chaotic evil but examples of all alignments exist, despite being niche.
Size. Soulrippers are about 6-7 feet tall in normal form and weigh about 200-250lbs. Your size is Medium.
Speed. Your walking speed is 40 feet (check humanoid's stats for its speed when in other forms).
Darkvision. You can see in dim light within 60 feet of you as if it were bright light, and in darkness as if it were dim light. You can't discern color in darkness, only shades of gray.
Deathstare. You can use your action to stare and inject death into another creature that can see you. When you use your gaze attack, the creature you target must make a Charisma saving throw. The DC for this saving throw equals 8 + your Charisma modifier + your proficiency bonus. A creature takes 2d8 necrotic damage on a failed save, and half as much damage on a successful one, and you regain hit points equal to the damage dealt. The damage increases to 3d8 at 6th level, 4d8 at 11th level, and 5d8 at 16th level. After you use this trait, you can’t use it again until you complete a short or long rest.
Human Shape. As an action, you can 'polymorph' into any humanoid of your size that you have seen, or back into your true form. While you retain this human form, creatures can discern your true nature with a successful Insight check of DC 8 + your Charisma modifier. Your equipment does not change with you. You do not gain any racial traits or abilities of your form, only cosmetic changes. If you die, you revert to your true form. You must complete a long rest after using this feature before using it again.
Languages. You can speak, read, and write Common and one other language of your choice.