One is inclined to think of these creatures as constructs made of shell. But that would be incorrect, despite the similar name. They are quite literally forges of shells, living ones. It is thought that many of the pretty things we find on a beach can be attributed to them. 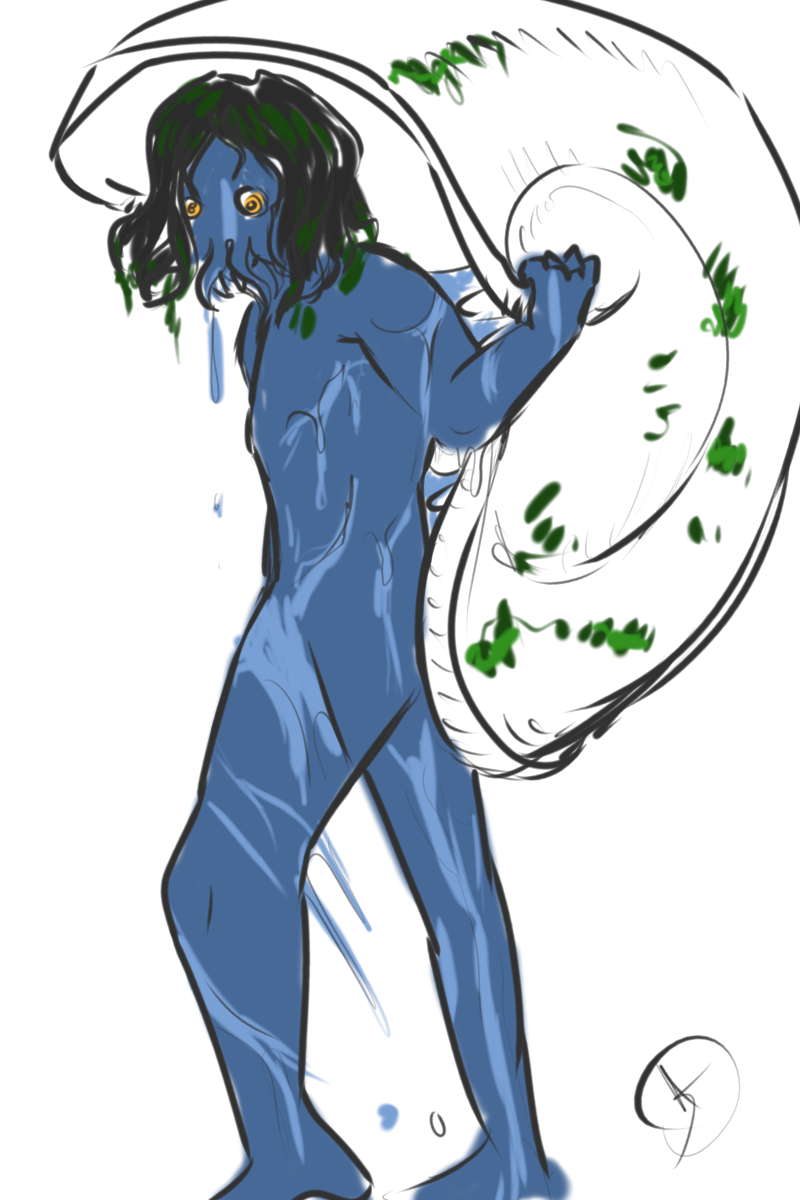 Shellforged resemble vaguely humanoid forms that are housed within a large shell. For females, the shell is usually connected to their bottom half of the body, like a mermaid, only with a shell. Males carry this shell on their backs. Their skin is usually varying hues of violet, blue, and even grey. The shells they carry are very large and vary in shape. Some have scallop shells while others have spiraling conch types. The design on the shells externally are usually dull, but the interiors are very beautiful due to the luster that shellforge excrete. Their faces are usually described to be hideous, with a fringe of tentacles above crab-like mouthparts and googly-eyes. Shellforge hair is usually very stiff and colored with algae, and they have slimy skin.

The shellforges are believed to have been an abomination made by Ghaunadur. As recorded, he created numerous creatures like slimes and monstrosities which were imbued with an alien intelligence. However, after a bitter exchange with Lolth, he grew enraged and struck most of his creations mad by robbing them of their senses. The shellforge are one of the lucky ones that the elder eye did not punish. They remained a relatively peaceful race in existence until the Age of Humanity came, and dwarven and elven kingdoms declined. Shellforges were usually given their own space by other races, but humans did not have this sense and so encroached on their territories many times, eventually driving them out of the Sword Coast completely. Shellforges did not go quietly, and they yet desire to wreak havoc on the ones who push them around.

Shellforges live in small groups known as “clusters”. These societies are usually built within eroded marine caves and coves. Using coral, colorful sea pebbles, and their own lustrous slime as a glue, shellforges make amazing interiors of otherwise drab caves. This reflects their general philosophy that one can never judge only by the surface. It is the same for them. They wish to be looked at past their ugly appearance, which is only ugly to non-shellforges anyway. Their clusters are open-love societies, without a hierarchy. There is little concept of nuclear families, as they see their cluster as one big family. Mating season is often late in the hotter months, when the moon is full. A month later, the bare walls of their caverns, specially designated for eggs, will be filled with sacs of them.

The reason for their name is because they actually do make shells with their bodies. It is believed that the shell they have on their body was formed by their own luster slime as a child, and only built upon as they grew. By applying their slime onto smaller materials, they can essentially fuse them into pretty shapes like other shells. These usually sell at decent prices. The main shell of a shellforge is also unable to be separated from their body unless they died, and it is worth more than any small shell they make.

They are creatures that live usually on coasts between land and sea, and so know Aquan. This Primordial dialect is usually used in their names. Due to the composition of their mouth, they often speak with a lisp, and so all their names have a "th" sound.

Beings with slimy bodies that make shells
Ability Score Increase. Your Constitution score increases by 2 and your Wisdom score increases by 1.
Age. They tend not to live much longer than 300 years. Few die before reaching 120.
Alignment. Unlike their supposed creator god, they are not necessarily evil. But they do seem chaotic.
Size. Shellfoged are taller than humans, though just barely. Their shell accounts for a lot of their weight. Your size is Medium.
Speed. Your base walking speed is 30 feet. You have a limited swimming speed of 20 feet due to your shell.
Darkvision. You can see in dim light within 60 feet of you as if it were bright light, and in darkness as if it were dim light. You can't discern color in darkness, only shades of gray.
Shelled Fortress. You can withdraw into your shell as an action, curling your entire body into its orifice. Until you emerge, you gain a +7 bonus to AC, and you have advantage on Strength and Constitution saving throws. While in your shell, you are considered restrained, your speed is 0 and can't increase, you have disadvantage on Dexterity saving throws, you can't take reactions, and the only action you can take is a bonus action to emerge from your shell.
Amphibious. While they have lungs, their special mouth and skin allows diffusion of oxygen from water. You can breathe both air and water.
Slime Coat. Your sleek and slimy body is hard to grab. Checks to grapple you roll with disadvantage.
Lustrous Artisan. Like your ancestors have, you can make objects of your bodily fluid, even without tools. As part of a short rest, you can harvest your slime to form one of the following items: a shield, a handaxe, a javelin, or 1d4 darts or blowgun needles.
Languages. You can speak, read, and write Common and Aquan.