These constructs were left as legacies of necromancers who could not be bothered to dispose of their own creations. Instead, they left these to roam freely, causing whatever havoc they may. 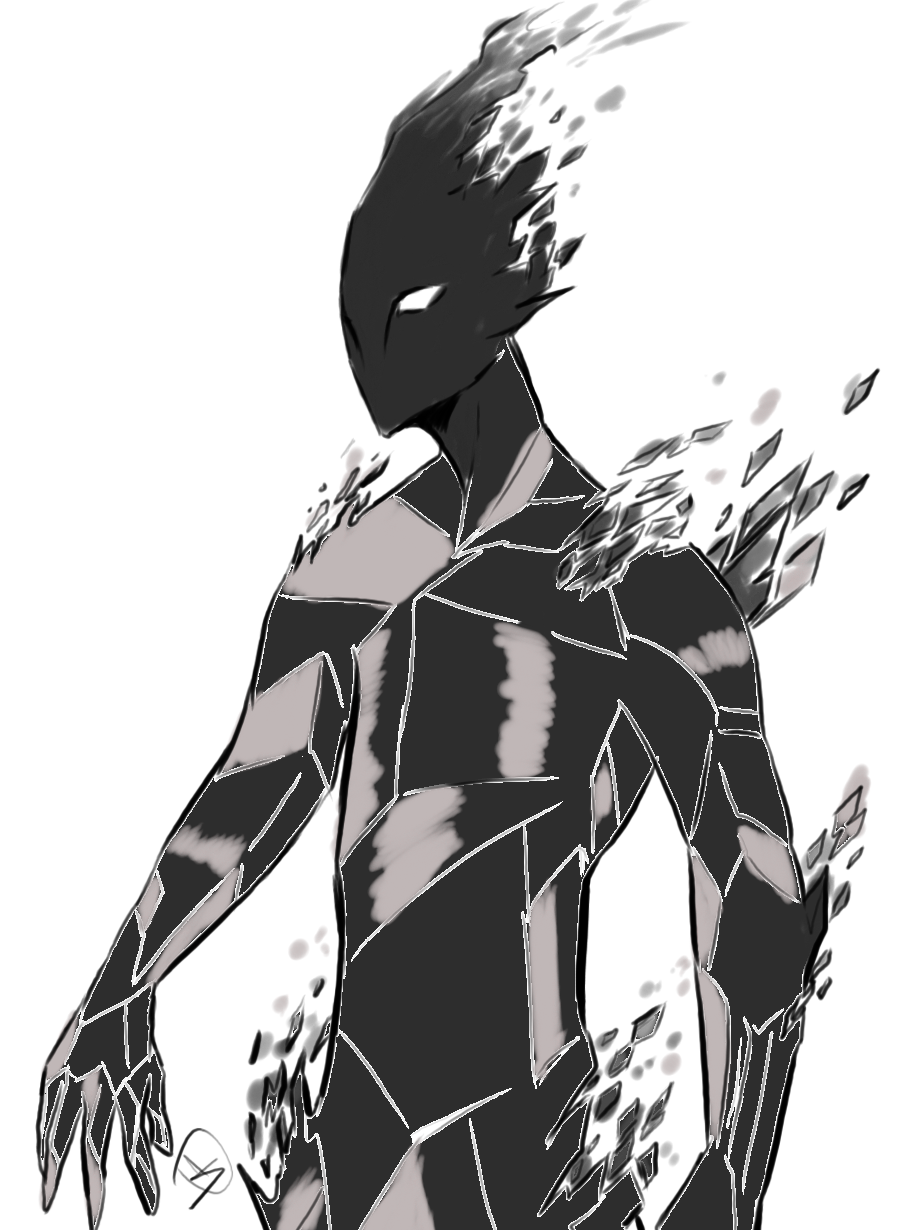 Shade diamonds are commonly referred to as shadia, a portmanteau of their full name. They resemble humanoids that have glassy, smooth bodies made of material like gemstone. Their color is always dark, ranging in hues of smokey to ethereal gray or black. A shadia has eyes that are white and lit. Their bodies seem to often shimmer when caught in moonlight due to its mineral composition. Most say it is made of black diamonds, or diamonds corrupted by influence of the shadows. Due to the dark magic composing its form, it sometimes phases in stability, resulting in glittering particles occasionally chipping off from parts of their being. They can momentarily collapse wholly into these particles to escape from narrow situations.

To give form to the ethereal madness that was a shade, that was the purpose for which the shadia were made. Magical architects skilled in makings of vessels created shells out of various materials in collaboration with necromancers. These holding caskets would then be imbued with the soul of the departed so as to make a powerful new soldier. In the end, the diamond shells proved the most able. The deterioration of material did not debilitate them like it did for other, softer minerals. The shadia were put to work at once. They became a favored kind of construct for necromancers. The only problem was their costly production.

The shadia's diamond shell made them much more durable than, say, skeletons or zombies. However, the disembodied soul imbued and trapped within the shadia slowly turned mad, eventually warping into a shade. Shadia, in the initial stages of making, appeared like clear, colorless, crystalline beings. However, as captivity rotted the soul within, it turned their bodies black. Eventually, this interfered with the control necromancers had over them, and they were discarded in masses out to the world, where they wander to this day.

Shadia mainly roam about alone or in groups no bigger than three. They seem to largely be egalitarian, or at least have no notion of hierarchy. A large gathering of shadia has never been recorded. They frequent areas with low population density and are common sights around abandoned mines or ghost towns. People originally took them for undead due to their dark form. Nonetheless they fear them for their gait and oddity. There exists a legend of them consuming souls to feed the shade within. As such, they wander the land in search of this food from healthy, isolated sources.

Shadia tend to be named based on the creator or name themselves. Because they are usually with a few loose screws, their names are a bit unconventional or outright silly and nonsensical.

Crystalline beings with a shade within
Ability Score Increase. Your Charisma score increases by 2, and your Constitution score increases by 1.
Age. Shadia do not age from creation and do not die of age.
Alignment. Shadia vary between evil and good to not having a care in the world.
Size. They tend to always be between 4 to 6 feet. Your size is Medium.
Speed. Your base walking speed is 30 feet.
Darkvision. You can see in dim light within 60 feet of you as if it were bright light, and in darkness as if it were dim light. You can't discern color in darkness, only shades of gray.
Phase Body. You can momentarily collapse your body into a cloud of glimmering particles, which is dark diamond dust. As an action, you lose your solid form and become a fluid shape. Until the end of your next turn, you can move through spaces as small as 1-inch wide. Any items that cannot fit through a space you pass through are left behind. This fluid shape is not incorporeal.
Unbreakable Diamond. Your body is composed of some of the hardest stuff in the world. While unarmored, your Armor Class is equal to 13 + your Dexterity modifier. You may use a shield and still gain this benefit.
Shade Soul. The shade within can devour souls to replenish itself. As a bonus action, you can eat the soul of a creature that has dropped to 0 hit points in the last minute while within 10 feet of you, as long as it is a creature that has a soul. When consumed, you gain temporary hit points equal to the CR of the soul consumed, minimum 1. These hit points last until you complete a long rest. You cannot target constructs or undead with this trait. Once you use this trait, you need to finish a short or long rest before you can use it again.
Construct Nature. You are a soul stuffed in a diamond casket. Your creature type is construct instead of humanoid. As such, spells like cure wounds don't affect you, and you are immune to spells like crown of madness or dominate person because they specifically target humanoids. You are immune to poison damage, being poisoned, and diseases. You do not need to eat, drink or breathe, though you may consume food and drink if you wish. Rather than sleeping, you enter an inactive state for 4 hours each day. You do not dream in this state; you are fully aware of your surroundings and notice approaching enemies and other events as normal.
Construct Mend. When the mending spell is cast on you, it has the following alterations: It has a casting time of 1 action. If you have 0 hit points you become stable. As part of the casting of mending the caster may expend any level of spell slot to cause you to regain a number of hit points equal to 1d8, plus their spellcasting ability modifier. For each level of the spell slot expended above level 1, you regain an additional 1d8 hit points.
Dark Within. The shade within remains averse to powerful light of divine radiance. When you take radiant damage, you are frightened until the end of your next turn.
Languages. You can speak, read, and write in Common and one language of your creator's (DM) choice, likely tied to your creator's language.