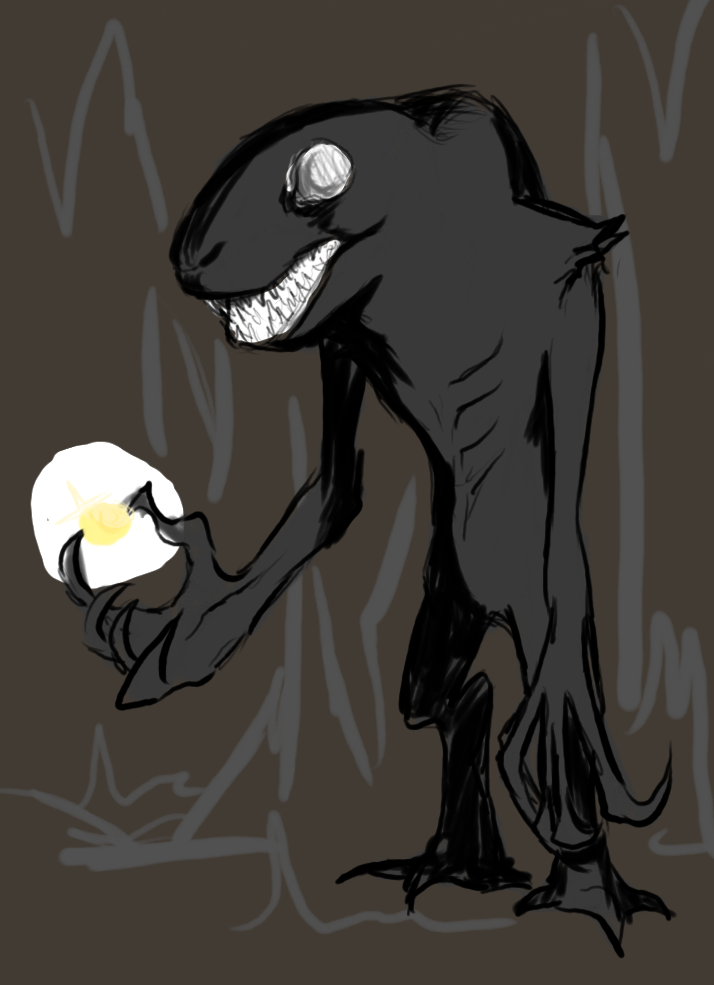 The se'krai are a vaguely humanoid race, reptilian in nature. Their scaly skin is jet-black, and a dark haze leaks out of it. They have a number of feather-like spines poking out of the back their heads and down their spine, and their bulging eyes are a dull, glazed grey. They have large jaws filled with teeth, resembling those of a deep-sea carnivore. They have thick necks to support their strong jaw muscles, sloping down to their large, rough, slightly spiny shoulders. They have a hunched stature, giving a clue about their four-legged ancestors. Their arms extend down to their shins, ending in dexterous, taloned fingers. They have armpit webbing, allowing for a very small amount of gliding when they're shirtless. They have very thin waists and small hips. They have double-knee legs, like a cat. Instead of feet, though, they balance perfectly on callused knobs of flesh.

The se'krai are creatures hailing from Shadowfell. When Shar orchestrated the death of Mystra and initiated the Second Sundering, the Plane of Shadow was created and many souls lost their way there on their journey to the Fugue Plane. While there, some souls, in particular, got mired in their greed and took on ugly new forms that had great bulging, luminous eyes and ran in packs like beasts on all fours. Their original desires manifested later as they adapted to the necrotic plane and they rose up to be bipedal, becoming the current day se'krai. Their greed is said to burden them to be misers and hunched, possibly reminiscent of a merchant's furtive position as they tried counting money in secret.

Before the end of the Spellplague, a good number of se'krai escaped into the depths of the Underdark, which was on the verge of becoming one with the plane. From the bowels of the Underdark, some se'krai ventured further up and were blinded by their first glimpses of light in the World Above. They were mesmerized at this world, bathed in light, where they used to live. However, they could never fully return to that life. As such, they organized in groups, forming a trading network to and from the Underdark to the world above. They are successful traders and there is a rumor a lot of their funds go to opening portals to Shadowfell to bring more se'krai to this world.

The se'krai live in huge, hive-like keeps, often built with slurry rock which dries. These odd, porous structures are often found in caves, as the se'krai cannot abide by the light after their creation in Shadowfell. A good many se'krai wander the land of Faerun as solitary seekers of their fortunes, perhaps drawn by memories of a past life. Within their communities, se'krai are very secretive and remain from eyes, save that maybe of customers.

They have a very mercantilist society and disposition, always looking to make good coin. Se'krai are no strangers to swindlers and have learned all the tricks of the trade when it comes to business, from quick, superficial furnishes to boost prices, to learning many tongues to talk around others. When threatened, they are quick strikers and fleers as well. Needless to say, scruples and integrity are not a vital part of se'krai philosophy. Friends are temporary means and honor means nothing if it means living another day to make another buck!

Se'krai names are pretty much guttural sounds, particularly the males. Females sometimes have names that sound like they have a lisp.

A vaguely reptilian race, surrounded by a dark past...
Ability Score Increase. Your Intelligence score increases by 2, and your Dexterity score increases by 1.
Age. They live to be around 50 years old, and mature at the age of 14.
Alignment. Se'krai live like merchants, neutral of everything that doesn't get in their face.
Size. Se'krai are a bit shorter than humans with their bent legs. Your size is Medium.
Speed. Your base walking speed is 30 feet.
Superior Darkvision. You can see in dim light within 120 feet of you as if it were bright light, and in darkness as if it were dim light. You can't discern color in darkness, only shades of gray.
Sunlight Sensitivity. You have disadvantage on attack rolls and Wisdom (Perception) checks when you, the target of your attack, or whatever you are trying to perceive is in direct sunlight.
Masterful Trader. You know very well the qualities of goods to better sell and purchase them efficiently. Whenever you make an Intelligence (History) check related to the quality or make of goods for sale, you are considered proficient in the History skill and add double your proficiency bonus to the check, instead of your normal proficiency bonus.
Bite. Your powerful, toothy jaw is a natural weapon, which you can use to make unarmed strikes. If you hit with it, you deal piercing damage equal to 1d6 + your Strength modifier, instead of the bludgeoning damage normal for an unarmed strike.
Limber. Your skinny body helps a lot when it comes to moving through small spaces. While squeezing in a space, you do not need to expend any extra movement.
Languages. You can read, write and speak Common and two other languages of your choice.

When creating a Se'Krai character, you can use the following table) of traits, ideals, bonds and flaws to help flesh out your character. Use these table in addition to or in place of your background's characteristics.

While se'krai sound like heartless moneygrubbers only out to make it rich, keep in mind they used to be other creatures. These personalities sometimes shine through.