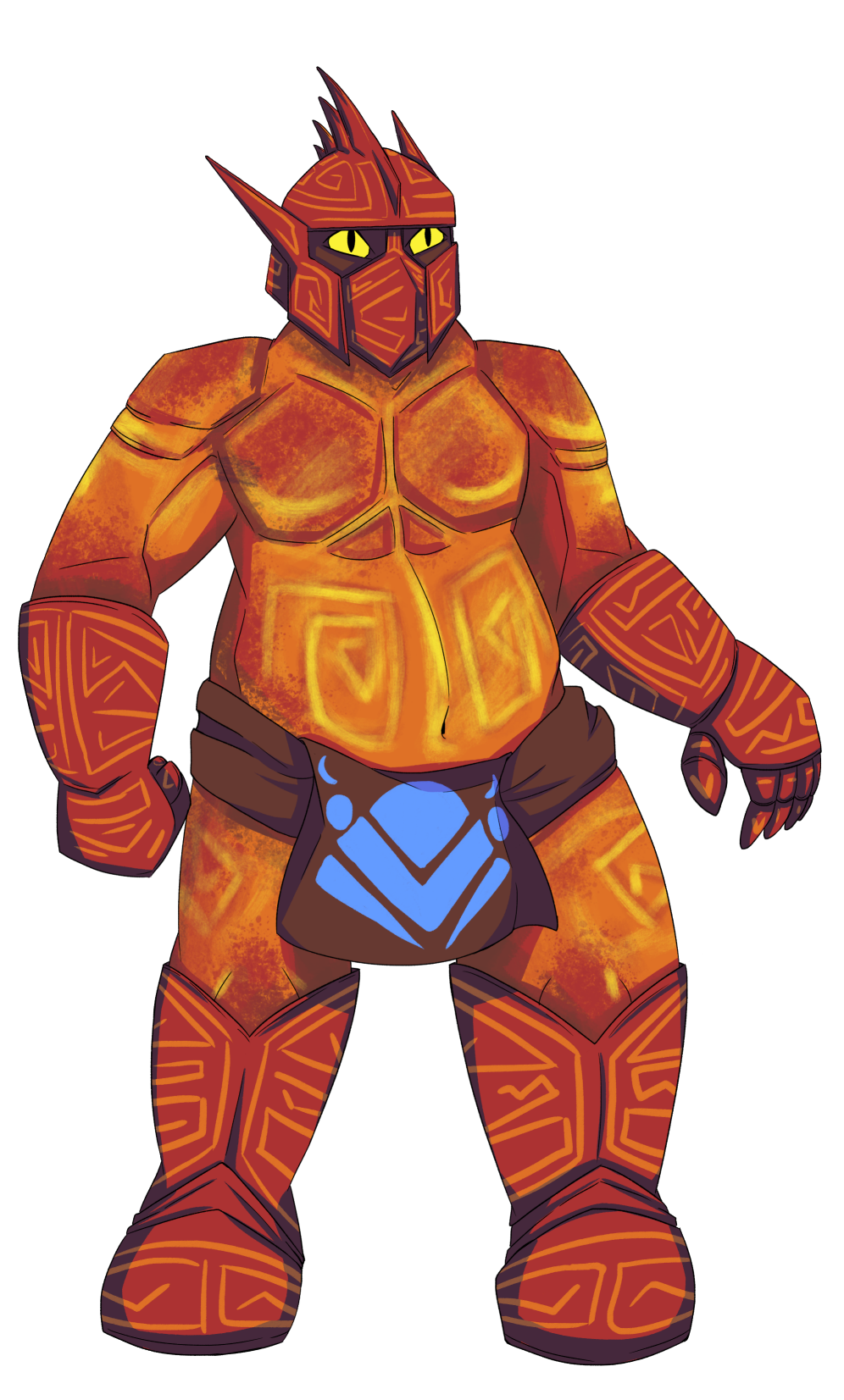 Scorians are rock creatures with large bodies, two muscular arms, and two muscular legs. Their bodies glow slightly from the magma that runs through their veins.

A race of rock creatures with magma for blood.
Ability Score Increase. As a scorian, your body is strong and tough. Unfortunately, this makes you big and bulky and not very dexterous. Your Strength score increases by 4 to a maximum of 24, but your Dexterity score maximum is lowered to 16.
Age. Scorians are known for living very long lives. They mature at a quick rate, usually being considered adults by the age of 10. However, they live to an average of 200 years old.
Alignment. Scorians are mostly of the lawful alignment as they follow their own codes of conduct very strictly. Those who do not are usually cast out of the tribe, left to starve without their food source.
Size. The average scorian is extremely heavy, weighing around 1,000 pounds. However, the average scorian is also only about 5 to 6 feet tall. You are a Medium creature.
Speed. Your base speed is 20 feet. However, you can roll into a ball by using 5 feet of your move. In this form, you can roll up to 40 feet, but only in a straight line. Turning costs an extra foot for every foot you attempt to turn, and the movement must be in a direction diagonal from your previous direction.
Elemental. Your creature type is elemental, rather than humanoid.
Of Earth and Magma. When walking through difficult terrain made of rocks or stone, you don't half your speed, and you can walk through lava without taking any damage.
Scorian Constitution. You are so resilient that when you would use your Dexterity modifier to determine your Armor Class, you instead use your Constitution Score.
Scorian Smash. Your fists are natural weapons, which you can use to make unarmed strikes If you hit with them you deal bludgeoning damage equal to 1d6 + your Strength modifier.
Scorian Spikes. If you are rolled into a ball, and are a spellcaster, you can use your action to spend a spell slot to turn your body into a massive ball of spikes until the end of your turn. When you move into an opponent's space while in this form, your opponent must make a Dexterity saving throw of a DC of 8 + your Dex mod + your proficiency bonus (as a scorian, are proficient with your spikes), taking 1d8 piercing damage on a failed save and being pushed back 5 feet as you roll into them.
Fireproof. You normally live around or even inside of volcanoes. You are immune to nonmagical fire, and have resistance to magical fire.
Ridiculously Strong. Treat your carrying capacity as if your Strength score was 10 points higher.
Scorian Proficiencies. As a scorian, you are known for your love of using massive weapons made of stone known as "crushers". You gain proficiency in crushers.
Languages. You know Common and Scorian.