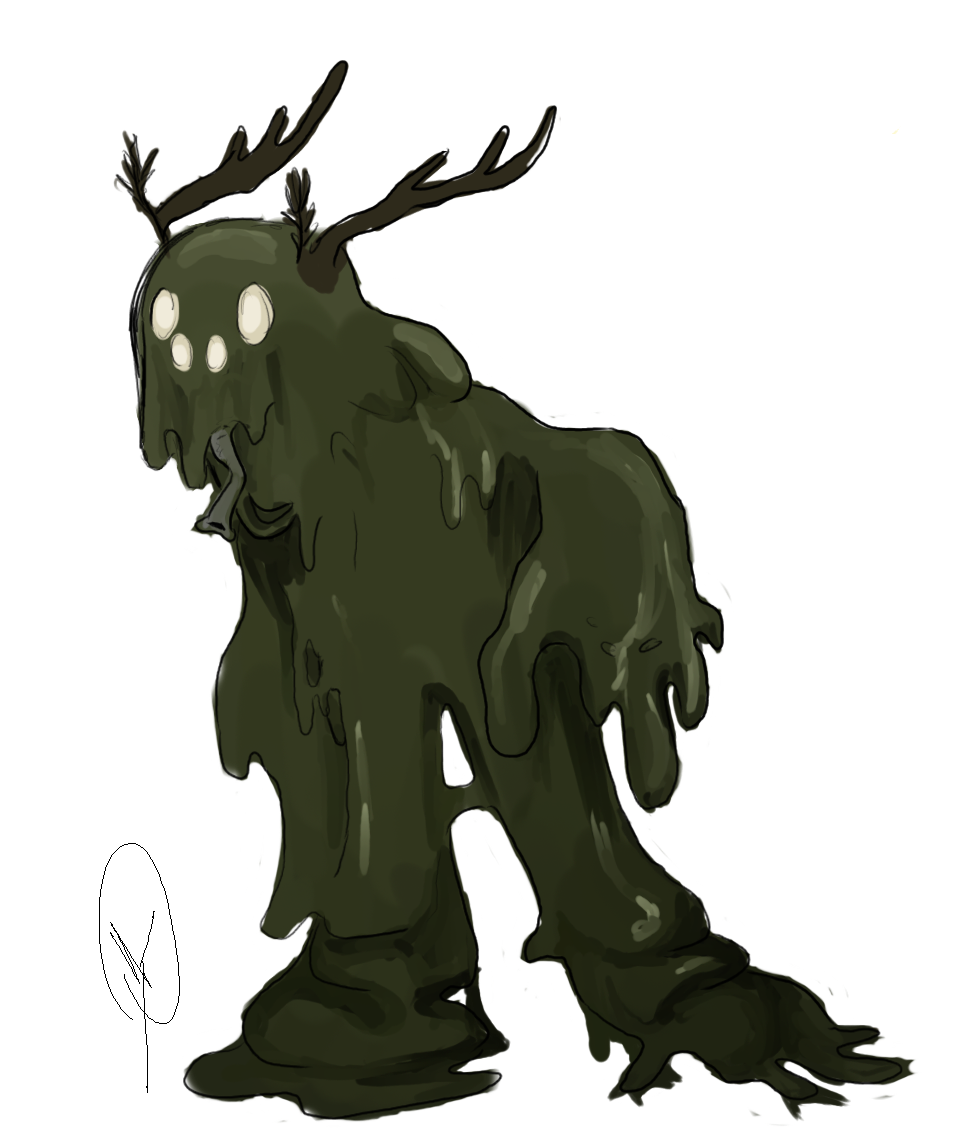 The sazelim are beings that are something like a mix between oozes and insects. They have a humanoid form, covered head to toe in dark tarry substances. It is unknown if their body has structure underneath, though this is generally accepted. From their head are four dim glowing eyes, but other features are unseen. They are believed to have a mouth like a fly, with a proboscis. On their heads are two pairs of appendages. One is an extremely sensitive pair of antennae, equipped with powerful pheromone sensors to pick up scents with hairline accuracy about 600 times better than that of a human. The second pair are antlers. What is also unique about a sazelim is that their hands and feet have special glands that can taste through their ooze cover. This, coupled with their superior smell sensors, allows them to be extremely aware of their surroundings even when they cannot see.

The sazelim are creatures borne of abandoned swamps, or at least that's the best known origin. They are known for having roamed these areas like bogs and bayous. Prior to the discovery of their villages, they were seen as a sort of bogeyman or cryptid. After some expeditions revealed their vast network, they were seen to be natives of the wetland terrain. Sazelim legends claim they were formed of a god's blood which flowed from the gulleys and pooled into the stagnant waters. After passing through estuaries, a variety of life forms were mutated by the blood, some merging together to create new life. This would explain the chimerical and strange nature of the sazelim body.

Along the many waterways that spiderweb into bayous and swamps are where the sazelim build their villages. Their villages are rather rudimentary, built from dead tree hollows and swamp detritus. These dwellings are meant to be easy to reconstruct when they have rotted or grown out of use. These sort of abodes are also conveniently camouflaged from untrained eyes with their surroundings. Sazelim communities are highly self-sufficient and communal. They are able to eat a variety of foods and survive on a rather bare lifestyle. The large network they have is composed of a non-individual attitude. Sazelim do not have individual families, and will often go to each others homes and stay without much of a second thought. To a sazelim, outside eyes are annoyances in their otherwise quiet lives, which they like to keep.

Due to their nonchalance on their individual self, they do not usually use names with each other. It is believed they have pheromones in their antlers that can allow them to recognize one another. Outside their villages, they take up simple, garbled names on account of their unconventional mouth.

Slimed up dwellers of the swamps
Ability Score Increase. Your Constitution score increases by 2, and one other ability score of your choice increases by 1.
Age. Sazelim live for up to 80 years of age and collapse back into sludge when they die.
Alignment. Desiring a quiet life, the sazelim are usually neutral.
Size. While they can start out a little short, their bodies are dense with ooze. Your size is Medium.
Speed. You have a walking speed of 25 feet.
Chemoreceptors. Without needing to use your eyes, your powerful olfactory senses allow you to basically see without seeing. You have advantage on Wisdom (Perception) checks using your sense of smell. You can detect other creatures within 30 feet of you by sense of smell. When you detect a scent, the exact location of the source is not revealed, only that its presence is somewhere within range.
Slippery Body. Your body is covered with thick, viscous ooze that makes you hard to burn and grab. You are resistant to fire damage. Additionally, checks to grapple you roll with disadvantage.
Swamp Metabolism. You can consume materials like mud and algae to fulfill your food and drink requirement without negative side effects. You also have advantage on saving throws to resist being poisoned and diseases as a result of ingesting food and drink.
Hold Breath. You can hold your breath for up to an hour at a time.
Goo Shot. Your sludge is a natural weapon with which you can make a ranged weapon attack. If you hit with it, it deals 1d4 acid damage.
Languages. You can read, write and speak Common, though you speak as if your have a clogged throat.