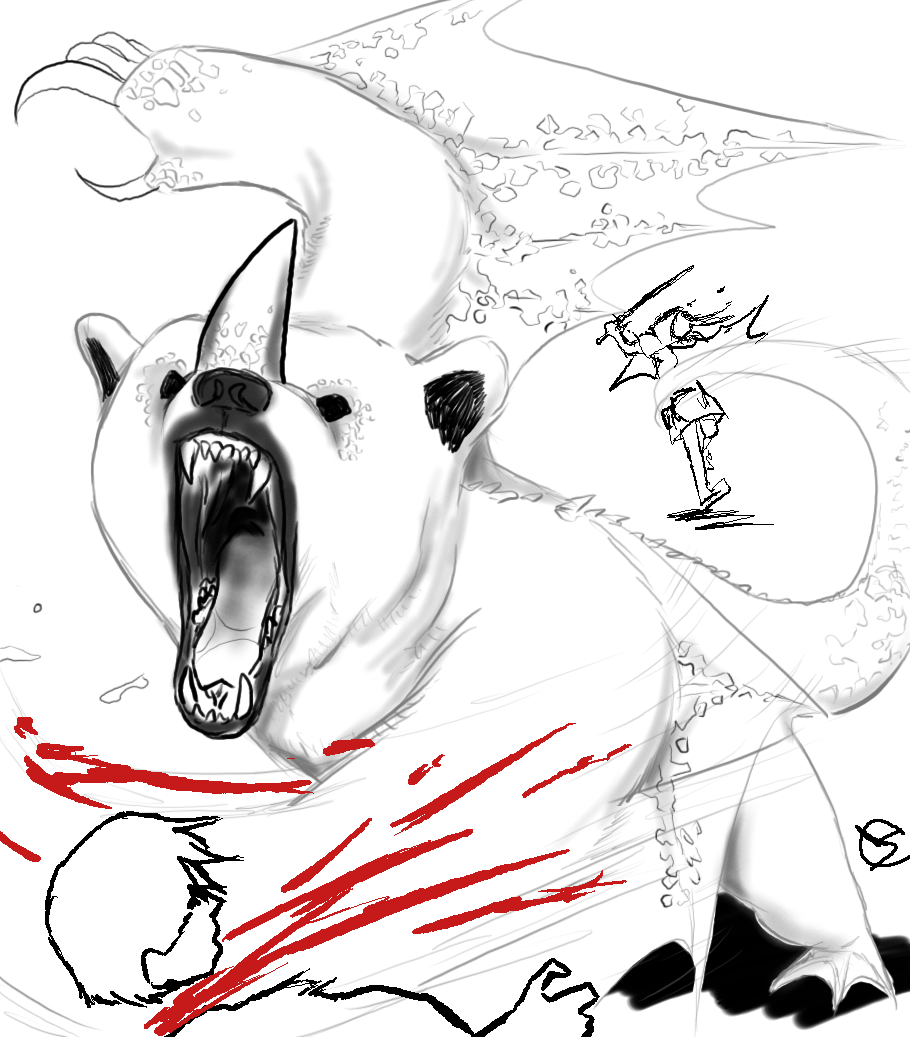 These creatures of the arctic terrain are usually quite tall standing, much more so than a human. Cubs are a lot less threatening. Polar dragonbeasts are covered in white fur and scales. Under the white fur on their head, the skin is black however, and shows on their lips and noses. Their body is generally like that of a polar bear, with wicked long claws for grappling snow and ice. There is a tusk on its snouted face for goring opposition. Their feet end in three webbed toes. Similar webbing attached to their arms make for fin-like wings that allow them to swim rather than fly. To finish it all off, they have a powerful scaly tail like a dragon.

Polar dragonbeasts are believed to be a result of a phenomena known as dracofication. Supposedly, following the waning power during the Time of Dragons and the rise of the Untheric empire, Tiamat was raising horrid spawn in her battles against Bahamut. Among these activities, her followers sought to keep their faith amid the apathy towards the draconic gods. They wanted to aid her in her battle, and so tried to replicate the spawning process. Their methods used other creatures as bases for draconification, which imbued powers and properties of dragons into them. What made this truly a horrible act was that the essence they imbued these creatures with was that of the chaotic Tiamat herself. Thus, many of these creatures could not live through the process and degenerated.

The polar dragonbeasts survived, gaining water and ice draconic properties. Following the fall of Marduk and Tiamat as deities, her followers could no longer control their experiments and unleashed them into the world to be someone else's problem. The polar dragonbeasts fled from their creators and dove for the waters, swimming without end back to the cold climate, where they live in seclusion to this day.

Polar dragonbeasts are highly territorial and dangerous, almost like wild animals still. They prowl mainly as solitary hunters, with many females leading small families in the frigid wilderness. They communicate their territories like bears, by marking trees, floes, and through loud roars to show their presence. Males will usually impregnate multiple females on the move, but rarely stay with them to raise a single family. Polar dragonbeasts are always on the move after prey like seals and seal hunters. When a cub is of age, they typically set off to go find a family of their own. Few ever leave the cold for civilization, having inherited suspicion of those who had used them and turned them from their original selves. However, some do harbor a taste for exploration.

These beasts have rough understandings of language. They have been known to refer to each other in shorter versions of Draconic names that are gender neutral.

Polar bear dragon creatures
Ability Score Increase. Your Constitution score increases by 2 and your Strength score increases by 1.
Age. They mature around 20-50 but live to 5,000 years thanks to the dragon essence in them.
Alignment. Due to Tiamat's essence, they tend to be very chaotic, such that they can be evil. However, devotion to the family and survival mellows most of them to be neutral.
Size. Polar dragonbeasts can stand at an impressive 8 feet on their hind legs. Your size is Medium.
Speed. Your base walking speed is 25 feet. You have a swimming speed of 40 feet.
Darkvision. You can see in dim light within 60 feet of you as if it were bright light, and in darkness as if it were dim light. You can't discern color in darkness, only shades of gray.
Claws. Thanks to your claws, you can grip icy surfaces and not slip. You do not treat snow or ice as difficult terrain.
Tainted Breath. The dragon part of you allows for somewhat of a breath attack. You can use your action to exhale destructive freezing energy in the shape of a 15-foot cone from yourself. When you use your breath weapon, each creature in the area of the exhalation must make a Constitution saving throw. The DC for this saving throw equals 8 + your Constitution modifier + your proficiency bonus. A creature takes 2d4 damage on a failed save, and half as much damage on a successful one. The damage increases to 3d4 at 6th level, 4d4 at 11th level, and 5d4 at 16th level. If you reduce a creature to 0 hit points with your breath, it becomes frozen solid in a thick coating of ice. After you use your breath weapon, you can't use it again until you complete a short or long rest.
Great Lungs. You can hold your breath for up to 1 hour at a time.
Cold Resistance. You have resistance against cold damage, and you have advantage in saving throws against Extreme Cold conditions, as written in chapter 5 of the DMG.
Languages. You can speak, read, and write Common and Draconic.