Lu-Kaav knelt in prayer to his gods, knowing that he, and only he, knew of their true glory. Regardless, he was the last of his kind. He had to ensure that his people would be remembered well. He rose to his feet, stepping out of the chapel, only turning back upon hearing a familiar crackle... 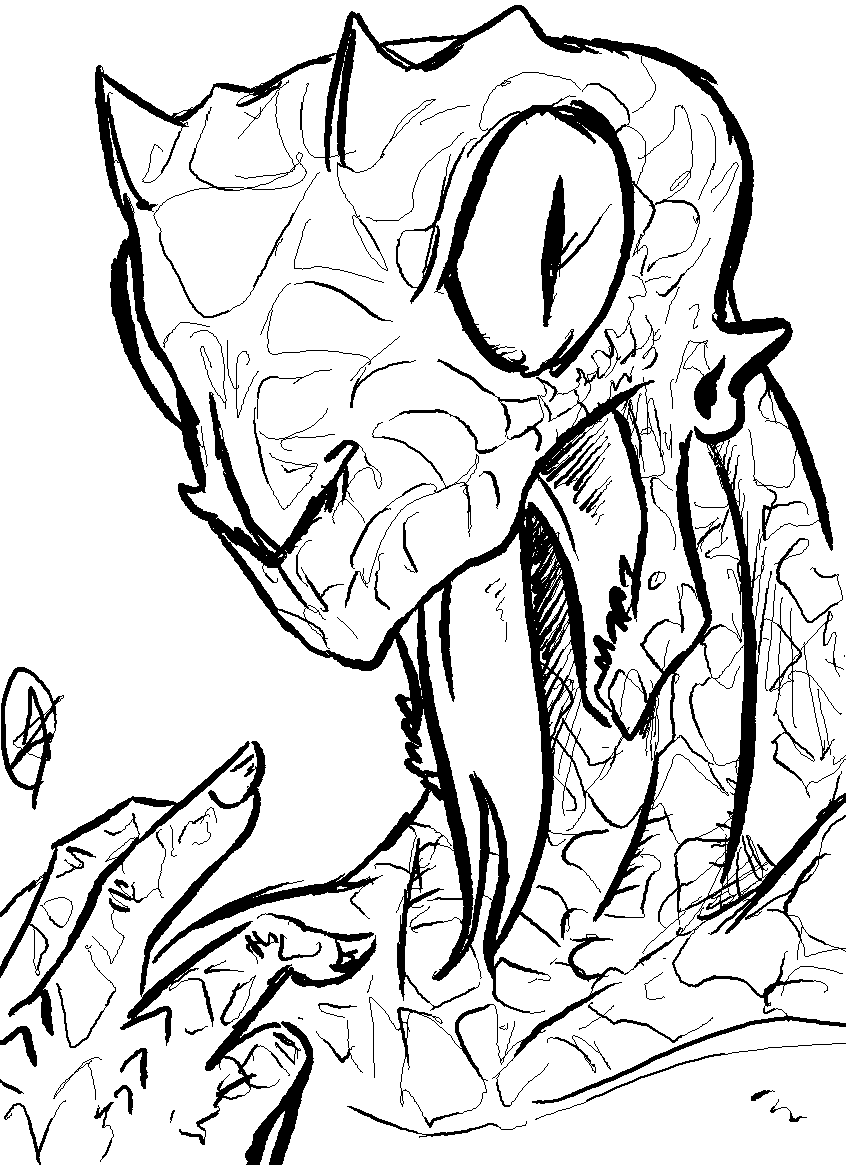 The neshii are a race of horned, reptilian humanoids. They bear facial features and structure arrangement similar to humans, but sport a split jaw and large, spherical eyes. They also have a somewhat forked tongue. Otherwise, their appearance of scales can change based on their subrace. Neshii-Mava are tall and slender, with green scales. Neshii-Nula are broad and hardy, colored yellow, and neshii-kana look very average other than their glowing eyes and blue scale skin.

The neshii are a race of dimensional vagabonds, always drifting from world to world. Some say they were a relative of the sarrukh cursed to be eternal bystanders by cosmic deities. They have existed for all time as a sort of observer, meant to witness the end of the world in which they reside. They have existed in countless alternate realities, always leaving in the last moments of that reality's existence. The neshii developed the collective ability to open rifts to adjacent universes, but only when united as a race and faced with the desperation of the end of days. Because of this tragic observatory position, many neshii have retained the ancestral memories that their forefathers bore after the fall of the world before this one.

They once were a proud empire that spanned all of existence, making their homes on any and all of the planes. Since the fall of their first universe, the neshii have had no real culture of their own, barely being able to cling to the faiths of their ancestors. All neshii today are not spared the memories of watching their home collapse into ruin and drive them to near extinction. Neshii as a race value memories as the means to keep community bonds, which means even the painful moments are an opportunity to yet come together. Their names are the only thing truly left from their civilization of golden days. Today, they mainly just adapt to whatever worlds they end up in, like hobos. Because they are usually practically guaranteed to see the end of the world, neshii tend to be apathetic and nihilistic.

Neshii take pride in their names, as this is all that remains of their original culture. They utilize a simple set of conventions: No surnames and only two syllables, with emphasis on the second syllable.

Reptilian humanoids who watched worlds die and passed mental strength on
Ability Score Increase. Your Wisdom score increases by 2.
Age. Neshii reach adulthood by age fifty, and often live well past four hundred years.
Alignment. Neshii are incredibly varied, but are almost always chaotic, valuing freedom over all else. It is common to find neshii bravely defending the downtrodden. However, they can also be the very source of their oppression.
Size. All range within 4 and 7 feet. Often weighing no less than 90 pounds, but no more than 300. Your size is Medium.
Speed. Your base walking speed is 30 feet.
Darkvision. You can see in dim light within 60 feet of you as if it were bright light, and in darkness as if it were dim light. You can't discern color in darkness, only shades of gray.
Of Mind and Body. All Neshii can use their powerful minds to manifest a powerful non-physical weapon. This power was honed through their mental acuity gained through accumulation of memories from their ancestors. You can cast the spiritual weapon spell once with this trait, requiring no material components, and you regain the ability to cast it this way when you finish a long rest. Wisdom is your spellcasting ability for this spell.
Clean Blood. The race of neshii have always been very sterile of other races and kept away, which lowered their own immune systems power. You have disadvantage on Constitution saving throws against disease.
Languages. You can read, speak and write in Common and Primordial.
Subrace. Choose one from the Neshii-Mava, Neshii-Nula, and Neshii-Kana subraces.

These green neshii are slender and move with grace and quickness.

Ability Score Increase. Your Dexterity score increases by 1.
Blur. You move fast to avoid detection. You are proficient in the Stealth skill.
Light Bones. Neshii-mava have light bones which allow for easier jumping. Your jumping height is tripled. Additionally, your base walking speed is 35 feet. You do not take falling damage from heights of 30 feet or less.

These yellow skinned neshii are broad chested and have the same shoulders. This makes for a hardy body.

Ability Score Increase. Your Constitution score increases by 1.
Hardened. Neshii-nula combine their mental strength with corporeal ardor to bolster defenses. While unarmored, your Armor Class is equal to 12 + your Constitution modifier. You may use a shield and still gain this benefit.
Unyielding. With their tough bodies and tempered minds, neshii-nula can survive fatal blows. If you would be reduced to 0 hit points, you may instead drop to 1 hit point. You must finish a long rest to use this trait again.

The neshii-kana are often overlooked as average. However, they yield as surprising amount of intelligence in truth.

Ability Score Increase. Your Intelligence score increases by 1.
Peacemaker. You are smart with your tongue and wise with your words. You are proficient in the Persuasion skill.
Intelligence Guard. Neshii-kana are known to have incredibly well guarded minds, boasting some of the stronger connections with minds of the past. You have advantage on saving throws against being charmed.