The navarada are an ancient race of supernatural origin. 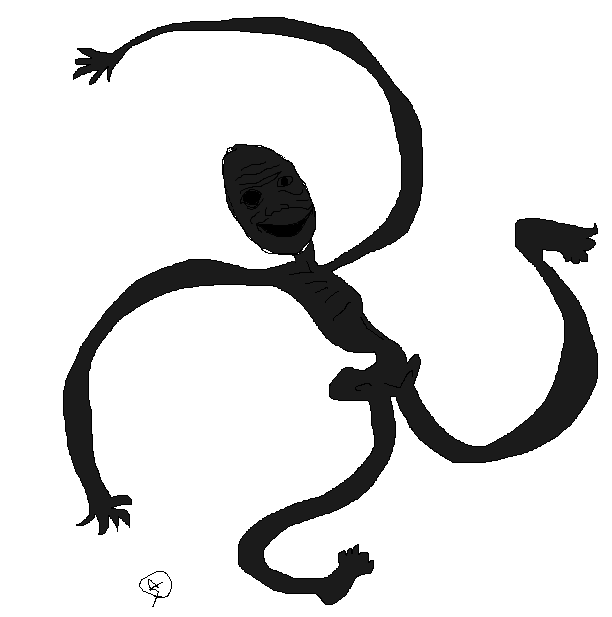 The navarada are commonly seen to be odd creatures that are dark skinned and reminiscently humanoid. Their torso and limbs are very thin and spindly, giving them the nickname "brittle star." Like a humanoid, their limbs end in feet and hands with digits. Their heads remain relatively normal, but they lack ears, instead having simple holes. They are completely hairless and both sinewy and bony to the touch. Their faces resemble that of a wrinkly human, and many have said them to be creepy. Their eyes are, in particular, like voids, with grey sclera. Their thin limbs are like rope, very flexible and bendy.

The navarada are an ancient race of supernatural origins that is said to have come from ancient stone. People discovered odd cracks in the faces of mountain stone which was cleaved to show a smooth surface. These cracks vaguely resembled humanoid lines, and they were empty. People were very perturbed by the shapes when they first saw them. Around those areas, odd, "squiggly" looking figures, with spastic, jerking motions, walked around and about the woods. One would feel their eyes, but never see them, for their limber forms allowed them to hide well. They are said to come from the cracks of the earth where things dwell that should never be seen. Like creatures of nightmares, they drain the life force of others. Efforts to hunt them are largely in vain due to their stealthy nature and cunning, which allows them to easily stalk prey and drain them of life.

The navarada are solitary hunters who congregate to share the fruits of their hunt in large groups. These groups are often called tangles due to how they interact like ropes with their limbs, coiling about one another. Through an act like kissing, they can share life forces which they drained among one another. They are especially social and active during nights of new or blood moons. Usually, it is during a blood moon when they are thought to procreate, utilizing life forces to draw out another of their kind from the mysterious cracks in the mountain face. People are naturally very fearful of navarada due to their creepy origins and behavior. Some believe the cracks they originate from come from the depths of Hell.

Their names are odd, with some elements sounding of ancient gods that no one remembers.

The navarada are ancient supernatural beings that live in shadows.
Ability Score Increase. Your Dexterity score increases by 2 and your Intelligence score increases by 1.
Age. Navarada normally reach full maturity at about 5 years old but can live almost forever as long as they consume life force. The older the navarada, the more life force it needs to consume.
Alignment. The navarada are chaotically neutral since they do not discriminate when it comes to their killings.
Size. Navarada are actually quite tall when lain head to toe. Your size is Medium.
Speed. Your base walking speed is 30 feet.
Superior Darkvision. You are most capable where it is dark. You can see in dim light within 120 feet of you as if it were bright light, and in darkness as if it were dim light. You can't discern color in darkness, only shades of gray.
Sunlight Sensitive. You have disadvantage on attack rolls and Wisdom (Perception) checks when you, the target of your attack, or whatever you are trying to perceive is in direct sunlight.
Limber. Your body is like a rubber band. You are super flexible and hard to stiffen. You have advantage in saving throws against being paralyzed.
Rope Limbs. Your entangling limbs are hard to escape. You have advantage in Strength (Athletics) checks to grapple other creatures.
Life Drain. As a bonus action, you may drain a creature that you have grappled. The target takes 2d4 necrotic damage. You regain a number of hit points equal to that amount. You must finish a short or long rest before using this trait again. The damage increases to 3d4 at 6th level, 4d4 at 11th level, and 5d4 at 16th level.
Languages. You speak, read, and write in Common and Abyssal.