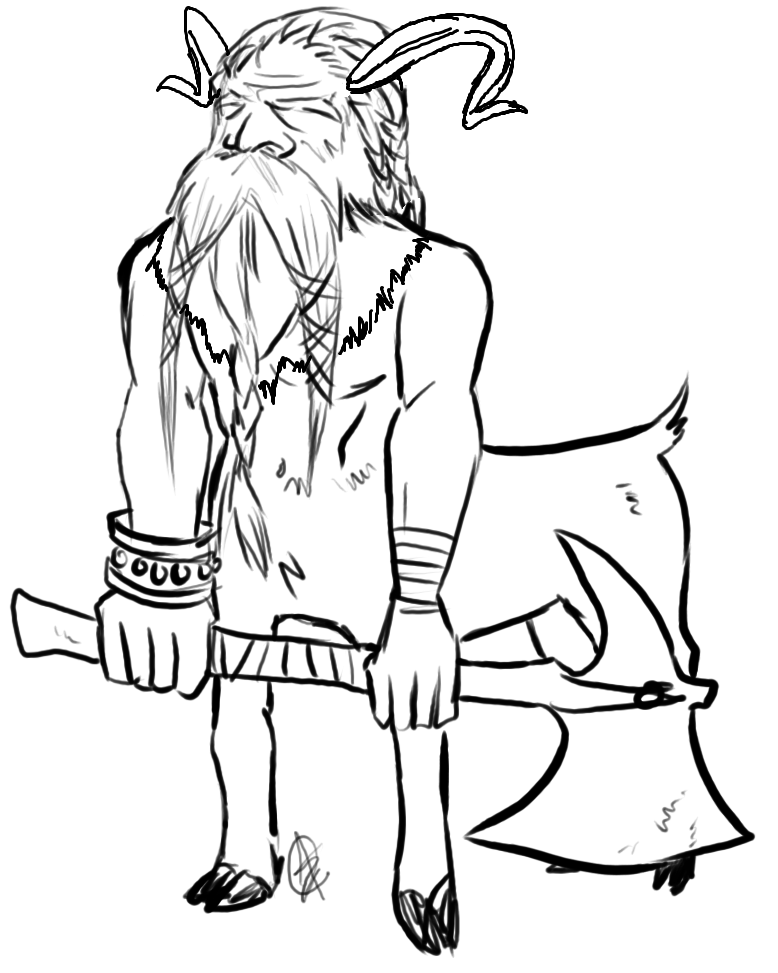 Mitocabra are built like centaurs but are much smaller, only growing to be about 4ft tall or so. They have the upper halves of dwarves and their lower halves resemble large goats. They generally have large horns and even tufted fur along their neck, shoulders and back that can be any color from light brown all the way to coal black.

Mitocabra are descended from ten dwarves of mixed subrace; five men and five woman, whom were favored in the eyes of Moradin for their ingenuity and valor among their race. Thus he let them retain their dwarven form while giving them the form of the truest of specialist mountain animals, the goat. These dwarves then bred with each other and the mitocabra race was born.

Mitocabra live in cities that protrude from the sides of steep rocky cliffs. These cities are almost inaccessible to outsiders without special climbing talents or equipment. Other than that, their society is essentially the same as dwarves with the sole exception being that they have lost their ability to identify rocks and stonework. Instead, they are better hunter gatherers around the mountain steppes where sparse grasses grow and small critters run about. These cities are highly exclusive and usually above a height dwarves find uncomfortable. However, mitocabra, with their goat legs jumping ability, find this child's play.

Mitocabra tend to be very reclusive, only emerging from their cities to fight or trade. They are known to be drawn by the scents of battle, and are riled simply over scents off competition for a mate. They are very protective of their territory and their own. However, they are not wholly hostile to outsiders, knowing they need to have interaction with the outside worlds to properly learn and grow. Every now and again, a young mitocabra may deem this life boring and travel away from their cliff based home out to the big wide world.

Dwarven goat centaurs that live on high cliffs
Ability Score Increase. Your Constitution score increases by 2.
Age. Mitocabra don't live quite as long as dwarves, reaching maturity at 35 and living to a maximum age of 325
Alignment. This race leans towards lawful alignments.
Size. You are usually about 4 feet tall and weigh about 175 pounds. Your size is Medium.
Speed. Your base walking speed is 25 feet.
Remarkable Stability. You have advantage on saving throws against being forcibly moved or being knocked prone. Your movement speed also cannot be reduced by armor or encumberment.
Sheer Rock Climber. You have a climbing speed of 15 feet.
Languages. You can speak, read and write in Common and Dwarven.
Subrace. Choose from the scimitar, curled, or stub horned subraces.

These mitocabra are commonly raiders on camps too close to their cities, and are common brutes.

Ability Score Increase. Your Strength score increases by 1.
Gore. If you move at least 20 feet straight toward a target and then hit it with a weapon attack on the same turn, the target takes an extra 1d6 piercing damage. The number of extra damage dice you gain increases by one at 6th level (2d6) and again at 11th level (3d6). You can apply this extra damage only once per turn.
Unrelenting Endurance. If you are reduced to 0 hit points but not killed outright, you may choose to drop to 1 hit point instead. You must finish a long rest to regain the use of this trait.
Strength Training. You are proficient in the Athletics skill.

The curled horn mitocabra are known for their cunning when backed against the wall, exhibiting incredible flexibility of mind.

Ability Score Increase. Your Intelligence score increases by 1.
Darkvision. You can see in dim light within 60 feet of you as if it were bright light, and in darkness as if it were dim light. You can't discern color in darkness, only shades of gray.
Moradin's Magic. You know the blade ward cantrip. At third level, you can cast the fog cloud once, without material components or expending a spellslot. At fifth level, you can cast the enlarge/reduce spell once, without material components or expending a spellslot. You regain use of these spells via this trait when you finish a long rest. Intelligence is your spellcasting modifier for these spells.
Creative Recollection. You are proficient in the Arcana spell.

The stub horn mitocabra boast the fastest speed. Even their horns are aerodynamically toned.

Ability Score Increase. Your Dexterity score increases by 1
Fleet of Foot. Your base walking speed increases to 30 feet.
Burst of Speed. You can take the Dash action as a bonus action. You regain use of this trait after you finish a short or long rest.
Naturally Nimble. You are proficient in the Acrobatics skill.