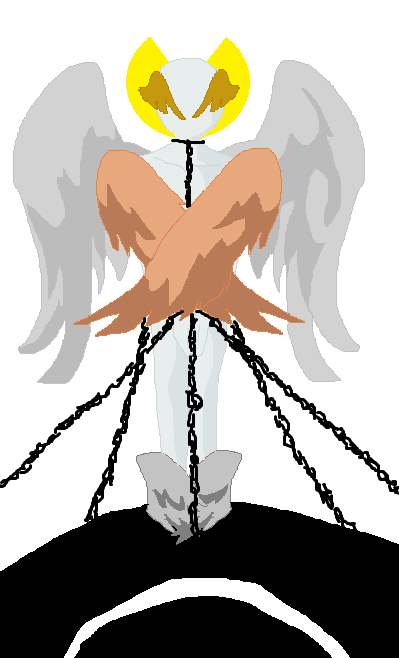 The bound destroyer, by Yanied

Mikhail is an angelic entity that resides in The Void, with an insatiable appetite for destruction. His power comes from his intimate connection to Kurma and mastery of The Void, allowing him to access all dimensions at any point in their many timelines. He is a patient force of nature, capable of sweeping away cities in a single night, but willing to corrode them to self-destruction over centuries.

Mikhail's physical form exists only in The Void, as he was made and is completely suffused with its energy. He has the figure of an enormous effigy of a man, carved out of glass and tempered in fire. He also as eight wings; two, made of bronze, cover his eyes. Two, made of iron, cover his feet. Two, made of copper, covers his body, and the last two, made of silver, he uses to fly. Because of his nature, he is chained by his wrists, waist, and throat to the underside of Kurma, and can only be released by his command. Behind him is an enormous golden halo, broken on its top with the two sharpened points pointing straight out.

When he sends a part of his being into another dimension or plane, Mikhail will take the form of a warrior in his prime. He does not prefer one race over another, and sometimes he will even decide to become a monster or creature. He will always be wearing a bronze helm, iron greaves, and a copper chestplate, and he will have a fully silver glaive in his right hand at all times. Many who look him in the eyes feel a burning intensity, like a thousand suns or a million battalions at the ready.

Mikhail is part of The Greater Host, and leads his own sect of the Lesser Host, known as The Dirae. Due to his nature, it is not often that he is given assignments by Kurma, and even the Dirae aren't usually taken to other planes, except to pass judgment.

Mikhail leads the Dirae, the largest sect of the Lesser Host, and is also known to use locust swarms as his messengers. Very few others follow him, as his thirst for destruction knows no borders, nor races, nor alighnments, nor creeds. If it was made, it will be destroyed. To follow him is to follow a wildfire; rather difficult and quite unorthodox.