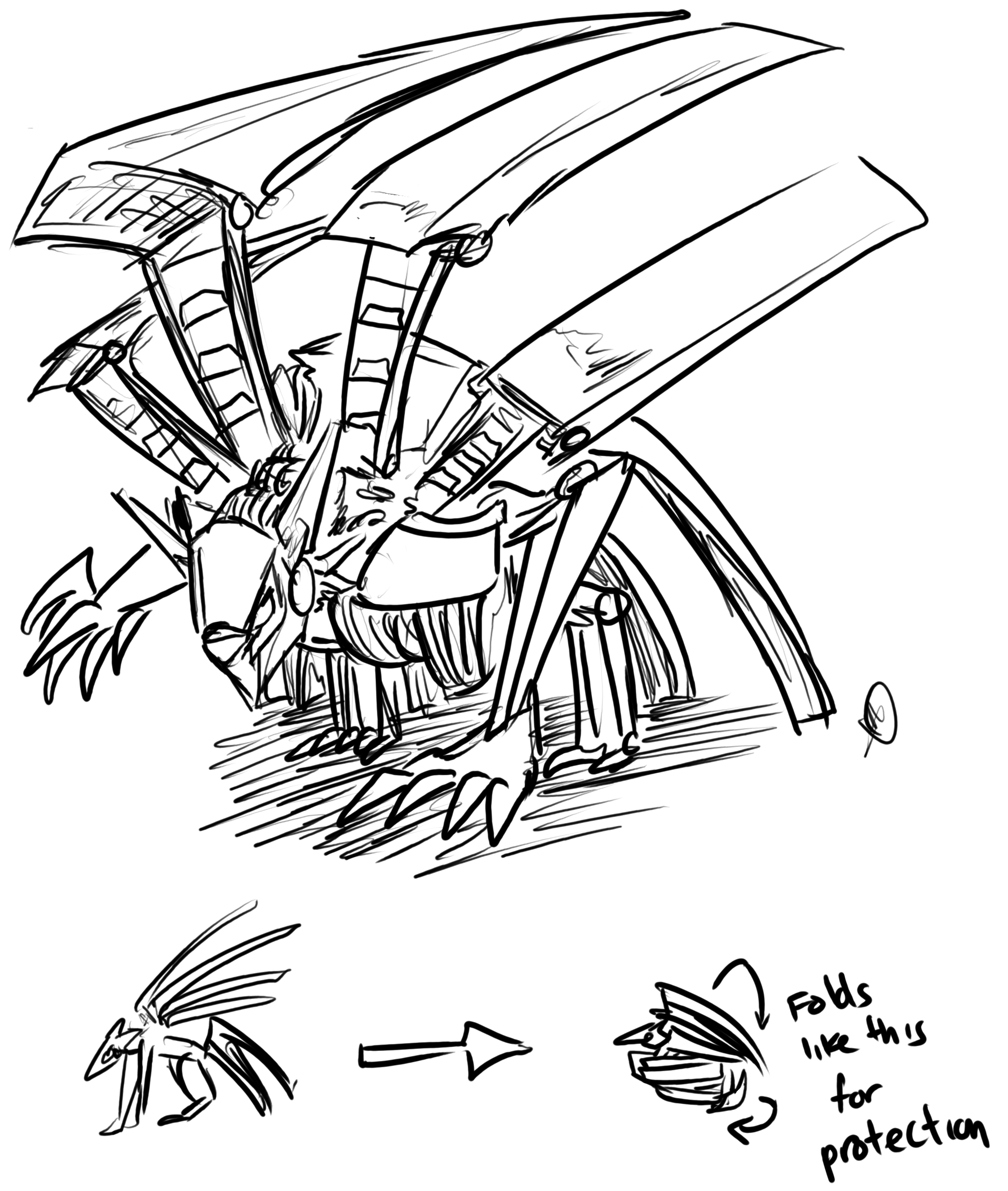 The name "mace armadillo" is pretty self-explanatory. They are constructs created to vaguely resemble the animal of their namesake. However, they are entirely nonbiological beings. To imitate the armor of an armadillo, the mace armadillo has several slats of metal that can fold and unfold around its body in reaction to danger. The "mace" part of its name comes from how its appearance, when curled up, vaguely appears like the head of a shestopyor-type mace with its distinct ridges. The rest of the construct itself tends to either be bronze or a tarnished silver color, with blue, gem-like eyes set in its pointed face. It has handy claws to help displace earth and burrow.

It is said mace armadillos were originally meant to be some sort of living siege weapon on conception. Their shells made them viable tools of warfare, and they would be able to burrow under enemy defenses and withstand heavy attacks. However, much like the warforged, peacetimes render them quite obsolete. Mace armadillos were made to be more mechanical than warforged, and so many lacked the free will to resist deactivation. It is rumored that a small group of engineers implanted some mace armadillos with the same runic orders as warforged, thus granting them sapience. These mace armadillos were modified to be able to stand on their hind legs, and are the only remnants of their kind today, as the rest have been rendered obsolete. These few in existence are believed to have fled into lives of isolation, though some can swear they saw them curiously wandering like a normal person through the technological markets of Eberron.

While it is unclear if mace armadillos know how to replicate their own, their numbers are most certainly very low. The technology of their creation has since been made obsolete by newer warfare developments, despite the current peace. However, the armadillos are known to be encoded with the notes of their own creation. Given the will, it is possible they can act upon this knowledge. However, actual communities of these constructs are not known for the most part. They are largely solitary nomads who travel from city to city, drawn to civilization.

Mace Armadillos usually have names that relate to a mace or a weapon of some sort.

Mechanical beings modeled after armadillos
Ability Score Increase. Your Strength score increases by 2 and your Constitution score increases by 1.
Age. Mace armadillos can live up to 100 years old before the runic magic in them runs dry, turning them into mindless hunks of metal.
Alignment. Their mechanical minds are geared largely towards lawful acts.
Size. Mace armadillos range from 6 to 8 feet tall. Your size is Medium.
Speed. You have a base walking speed of 25 feet.
Metal Body. Due to your makeup and shape, you are ill-suited to wearing armor. Your metal body provides ample protection, however; it gives you a base AC of 17 (your Dexterity modifier doesn't affect this number). You gain no benefit from wearing armor, but if you are using a shield, you can apply the shield's bonus as normal.
Curl-up. You can curl up to increase your defenses as an action. Until you emerge, you gain a +4 bonus to AC, and you have advantage on Strength and Constitution saving throws. While curled up, you are prone, your speed is 0 and can't increase, you have disadvantage on Dexterity saving throws, you can't take reactions, and the only action you can take is a bonus action to uncurl yourself.
Digger. As an action, you can burrow at a high speed, moving through up to 20 feet of nonmagical sand, earth, dirt, or similar material. While doing so, you leave a tunnel through the material you dig through and gain 10 feet of tremorsense until the end of your turn.
Construct Nature. Your creature type is construct instead of humanoid. As such, spells like cure wounds don't affect you, and you are immune to spells like crown of madness or dominate person because they specifically target humanoids. You are immune to poison damage, being poisoned, and diseases. You do not need to eat or breathe, and any food you do attempt to eat falls through the space where your head would be and into the bottom of your armor. Rather than sleeping, you enter an inactive state for 6 hours each day. You do not dream in this state; you are fully aware of your surroundings and notice approaching enemies and other events as normal.
Mendable. When the mending spell is cast on you, it has the following alterations: It has a casting time of 1 action. If you have 0 hit points you become stable. As part of the casting of mending the caster may expend any level of spell slot to cause you to regain a number of hit points equal to 1d8, plus their spellcasting ability modifier. For each level of the spell slot expended you regain an additional 1d8 hit points.
Languages. You can speak, read, and write Common and one other language of your choice along with talking to beasts. Since you originate from a beast categorized creature.