The Creation of the World[edit]

The world of Arda owes its existence and its name to the mother of the gods; Arda (for more information on Arda see the Gods & Goddesses section below).

The time frame of Arda can best be described as a mixture of the medieval and pre-industrial revolution eras of earth. Magic and superstition are still a prominent driving force of the world, but great advances in science and industry have been achieved including the invention of gun powder (known as Dragon's Dust), single shot firearms and crude steam engines. 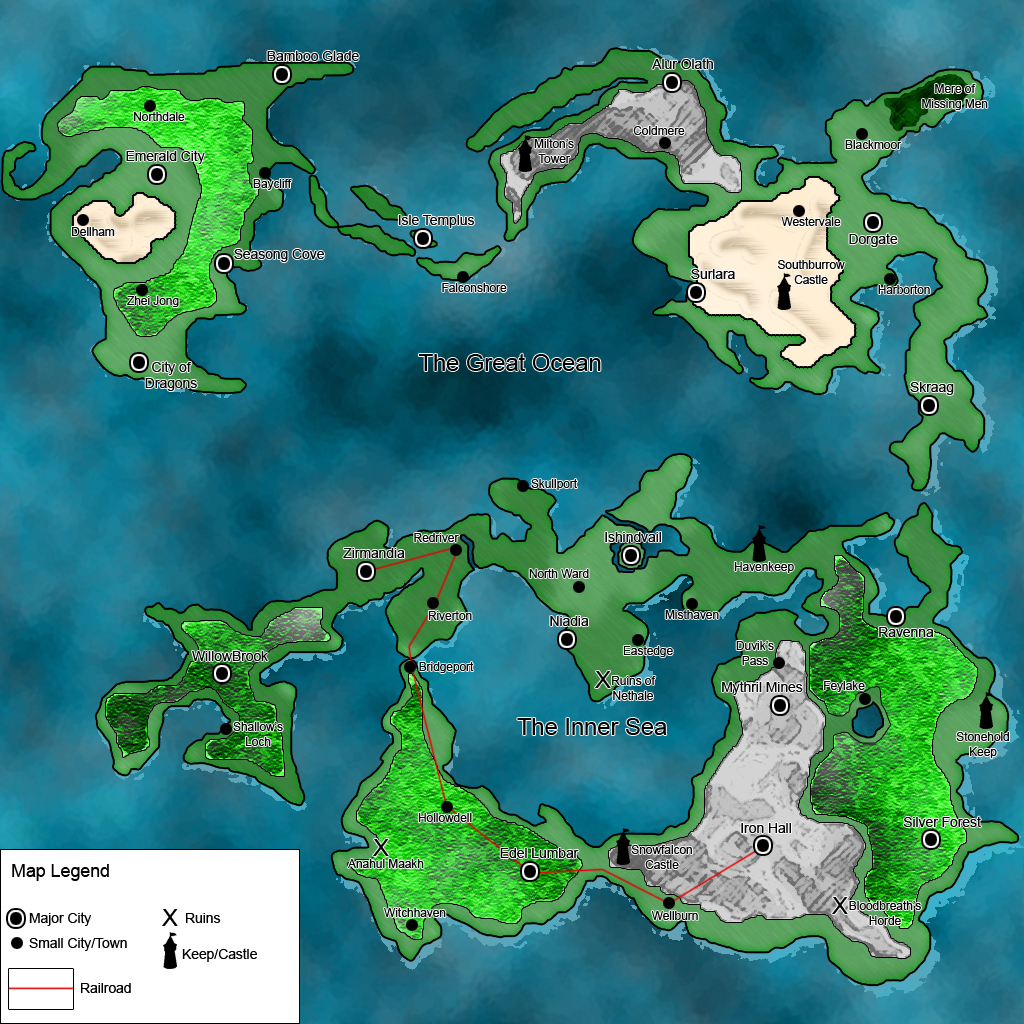 The first, named for the goddess Kuldara, orbits just barely outside Arda's own atmosphere, giving it a constant red glow and earning it the title of The Fire Moon.

The second, named for the goddess Miyarn, orbits far outside of Arda's atmosphere. It is believed that Miyarn was actually a smaller planet that was somehow caught in Arda's wake. This theory is supported by the ice that covers the surface of Miyarn and has earned it the title of The Ice Moon.

Each month of the Arda calender is watched over by an astrological sign. These signs seem to affect people born under them in strange and supernatural ways that no one has really been able to explain.

A year in Arda is 360 full days, this is the time it takes the world of Arda to orbit the sun and cycle through the seasons. The year is divided evenly into 12 months. Arda doesn't actually have days of the week, specific dates are referred to as the day of a particular month. On the calender the month is divided into three sections of ten days simply to save space and not for anything representing smaller sections of time.

Arda's countries adhere to a rather rigid caste system. You're born into your station and though it's not impossible to gain a higher position of wealth and favor it isn't easy.

The Burning Era is a period of time that goes as far back in history up until the begining of written history. This period is also called simply the Holy War, named so because it is the time period when the denizens of the outer plane of Hell swepted over the surface of Arda like a plague. In the planet's defense the gods took up arms against the demons in a war that is thought to have lasted thousands of years. At the end of the war the gods finally defeated the demons and banished them forever to the Outer Plane of Hell. In order to preserve balance the Gods locked themselves away in the Outer Plane of Heaven so that their would never again be direct contact between the immortals and the people of Arda. 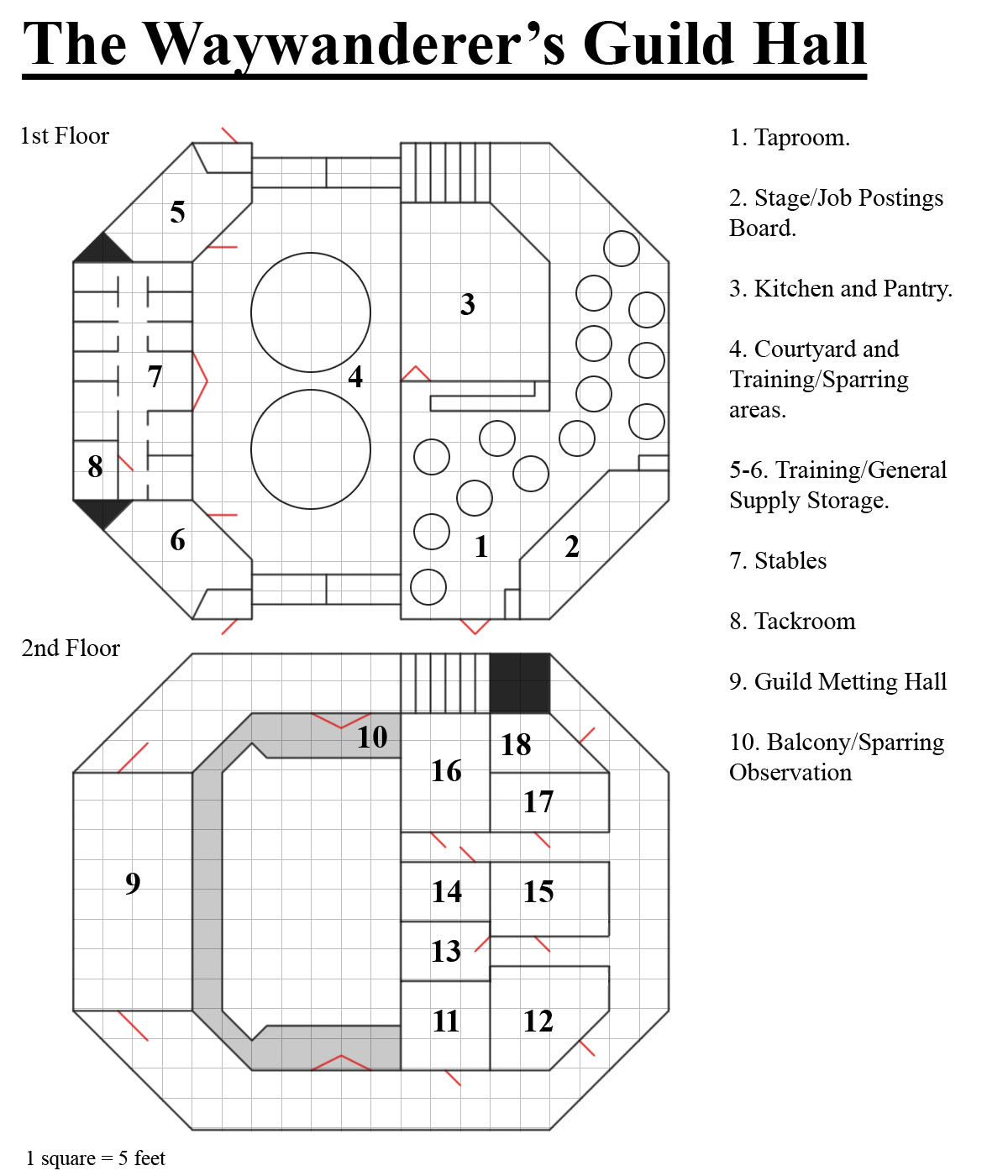 The Waywanderer's Guild house in (Add City) is the hub for adventurers looking for work, a drink or a room at a friendly rate.

The Waywanderers are a guild of like minded adventurers. Their Guildhalls are hubs of information and jobs. The guild halls also serve as training and boarding houses. The guild's main guild hall is located in the southern capital of Ishind Vail but the Waywanderer's, true to their name, operate smaller guild houses in every city in the world so that it's guild members are never too far from a helping hand. All members of the guild are required to pay a yearly due of 5gp to retain their guild membership.

Becoming a Member: Becoming a member of the Waywanderer's Guild is as easy as finding a guildhall, filling out an application and paying a 10gp fee of joining. After which you are given your guild membership papers and a voucher to have your travelling papers updated with the information of your new guild.

Perks of Belonging to the Guild

The Order of the Shadowed Flame[edit]

The Order of the Shadowed Flame, often referred to simply as The Order, is a 'secret' organization of like minded individuals who seek the preservation of order and law throughout the lands of Arda.

Though stories of The Order run rampant through out the lands of Arda, few people believe them to be anything more than a myth; something that the Order both encourages and supplements with outlandish tales spread among the bards of the land.

Travel papers are required for all citizens traveling through Arda; they identify the owner with a physical description, birth date, home town, guild affiliation and other pertinent information. Some wealthy and veteran travellers go ahead and spend the extra gold to have their papers created with a magically augmented portrait that changes along with their age and physical appearance. Making fake copies of travel papers under false names takes a week's worth of work and a successful DC 15 forgery check for the regular kind and a DC 25 forgery check for the pictured kind. Fakes sell for three times the market value. Guilds and other organizations are very important in Arda. Guilds exist for virtually every profession in the world (be they legal or otherwise) and your guild affiliation is marked on the traveling papers each individual is required by law to carry. Obviously illegal guild affiliations aren't going to be marked on your travel papers.

Skyships have been the primary mode of air travel on Arda for the past century. Originally these massive, sky going vessels were created, driven and held aloft by pure magic. However, in the last two decades great strides have been made, reducing the amount of magic needed to create and operate these massive machines. Skyships are constructed like any seagoing vessel with the exception of the materials used. The hull and supports are created using Ghostwood and a traditional ships ballast stones are replaced with airstones.

Lore of Arda: The Burning Plague