Living graves are gravestones and statues that were brought to life by the powers of a holy figure or being, as to purge the lands of the damned or undead. However, not all are able to go back into their eternal slumber, and are left to forever sate their hunger for their souls. These graves appearances can range from your typical tombstone, to humanoid statues that once stood watching over the dead. Typically, those who aren't humanoid look similar to a spider, crawling on 8 legs and bodies consist mostly of what looks like dirt around the base of the tombstone. At the end of the tombstone lays a large set of teeth, designed for tearing and consuming the flesh of the damned. However, tombstones that resemble the shapes of humans appear humanoid, looking more to be a moving statue than a tombstone. They still however have the teeth necessary to rip and tear at the flesh of the damned or undead. 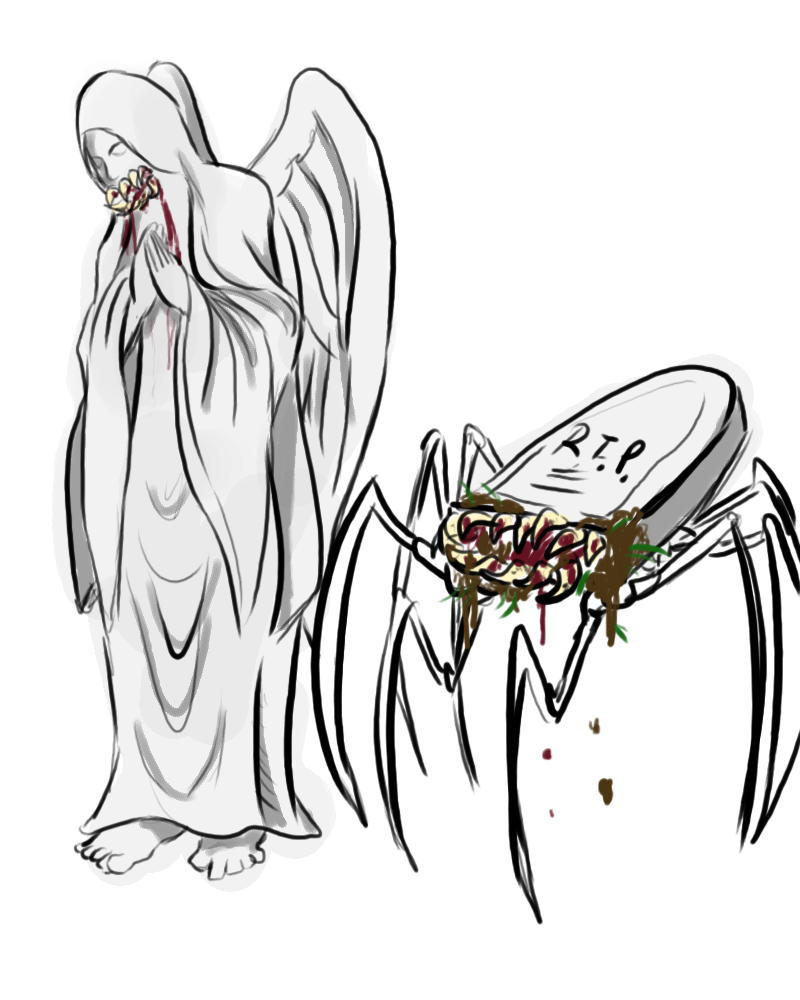 An angel and tombstone living grave. By Yanied

The first living graves were created by the holy powers of radiant gods to lay the damned and undead souls of the world to rest. Eventually, as the creator gods pulled out of the world, they left the secret magic of tomb reanimation to their followers who remained. These followers continued the work of their gods, summoning graves en masse to battle what they saw as unnatural forces of darkness, who were mainly undead. These graves were vicious, having watched over the dead, and now were hellbent to return them to their rest. Typically, after they had fulfilled their use destroying the undead in an area, the magic used to animate them would automatically turn off and they would return to an inanimate state, a marker looking over the undead slaughter.

However, some in their mission, became damned souls themselves that roam, haunting the living as well as the undead, despite their holy missions. Those who stray away from their holy missions typically are revered to as monsters of legend and myth, being used in children's bedtime stories as to teach them to behave, and stay in bed at night. The living graves that retained animation stalked the lands in search of undead and freaked the daylight out of many towns often when they saw these crumbling relics lumbering around. However, living graves remain true to their desire to kill undead and remain with good intentioned magic within. Thus, it is not unheard of for an angel living grave to amiably provide shade from the sun or rain to weary walkers beneath her wings, or for a headstone spider to play with curious children, despite how horrendous they look to society.

There are no societies of living graves, as they typically are brought to life as an individual with a purpose just to kill undead. Those who adamantly remain attached to this mission simply wander until they are reduced to rubble or have their magic lifespan revoked. When the two living graves meet, they typically attempt to devour one another, sensing the reality of the other's false life, which is similar to the imitation life of an undead. However, while they don't live among themselves, they are typically taken in by priests and other holy groups as guardians of the church and their holy grounds. Those who are raised by the same holy figures recognize their holy imbued life and thus cooperate alongside one another to protect from the damned. In other societies where the living graves may wander, they are amiable so long as there is no undead within their proximity. Tombstones have been known to act like children's pets and angels have been employed before as caretakers or guards.

The names of the living graves, particularly tombstones, is usually the name etched on the headstone. For angels, they are simply called "Angel." Living graves do not have sexes or genders, being very mission oriented.

Undead eating holy constructs.
Ability Score Increase. Your Constitution score increases by 2.
Age. The typical lifespan of a living grave is unending, the only force putting them to rest being the holy figure or being that brought them to life in the beginning. This tends to leave the living graves wandering for centuries, crumbling away.
Alignment. The living grave acts on its only sole purpose of laying the damned to rest once more, making them lawful. However, those who persist in remaining can be chaotic.
Size. Your size is Medium.
Speed. Your base movement speed is 25 feet. You gain additional movement speeds through your subrace.
Holy Statue Vision. As a statue, you aren't exactly able to see in the normal sense. You can perceive your surroundings without relying on sight within a specific radius. You have a blindsight range of 30 feet, but are blind beyond this radius. If an undead creature enters this radius, you automatically are aware of their creature type.
Construct. You are a statue made of stone and similar material. Your creature type is construct instead of humanoid. As such, spells like cure wounds don't affect you, and you are immune to spells like crown of madness or dominate person because they specifically target humanoids. You are immune to poison damage, being poisoned, and diseases. You do not need to eat or breathe, and any food you do attempt to eat is ground up in the gnashing maw you have that is a mouth. Rather than sleeping, you enter an inactive state for 6 hours each day. You do not dream in this state; you are fully aware of your surroundings and notice approaching enemies and other events as normal.
False Appearance. You may, as an action, retract your horrific teeth and stand completely still, burrowing your base into the earth and becoming statuesque. While you remain motionless, you are indistinguishable from a normal statue or tombstone. In this state, your speed is 0, and the only action you can take is to revert to your normal state.
Fixable. When the mending spell is cast on you, it has the following alterations: It has a casting time of 1 action. If you have 0 hit points you become stable. As part of the casting of mending the caster may expend any level of spell slot to cause you to regain a number of hit points equal to 1d8, plus their spellcasting ability modifier. For each level of the spell slot expended you regain an additional 1d8 hit points.
Holy Made. As radiant magic courses through you, it gives you the power to withstand similar attacks. You are resistant to radiant damage.
Magic Imbued. You are ultimately animated by magic. You are incapacitated while in the area of an antimagic field. If targeted by dispel magic, you must succeed on a Constitution saving throw against the caster's spell save DC or fall unconscious for 1 minute.
Bite. Your fanged maw is a natural weapon, which you can use to make unarmed strikes. If you hit with it, you deal piercing damage equal to 1d6 + your Strength modifier, instead of the bludgeoning damage normal for an unarmed strike.
Languages. Living graves know the language either through which it was animated or of the graveyard from where it came from, though they make a lot of slobber in speech.
Subrace. Choose from the Tombstone or Angel subraces.

Ability Score Increase. Your Strength increases by 1.
Legs. You have able spider legs that can scale walls with ease. You gain a climbing speed equivalent to your walking speed.
Reapers Jaws. In battle, you can throw yourself into a vicious assaulting frenzy. As a bonus action, you can make a special attack with your Bite. If the attack hits, it deals its normal damage, and if the target is undead, it takes additional poison damage equal to 1D4 + your Strength modifier. You can't use this trait again until you finish a short or long rest.

Ability Score Increase. Your Charisma increases by 1.
Angelic. Your being is more well received due to your appearance as a celestial being. You are proficient in the Persuasion skill.
Religious Icon. Whenever you make an Intelligence (Religion) check related to a holy burial ground or sacred site, you are considered proficient in the Religion skill and add double your proficiency bonus to the check, instead of your normal proficiency bonus.