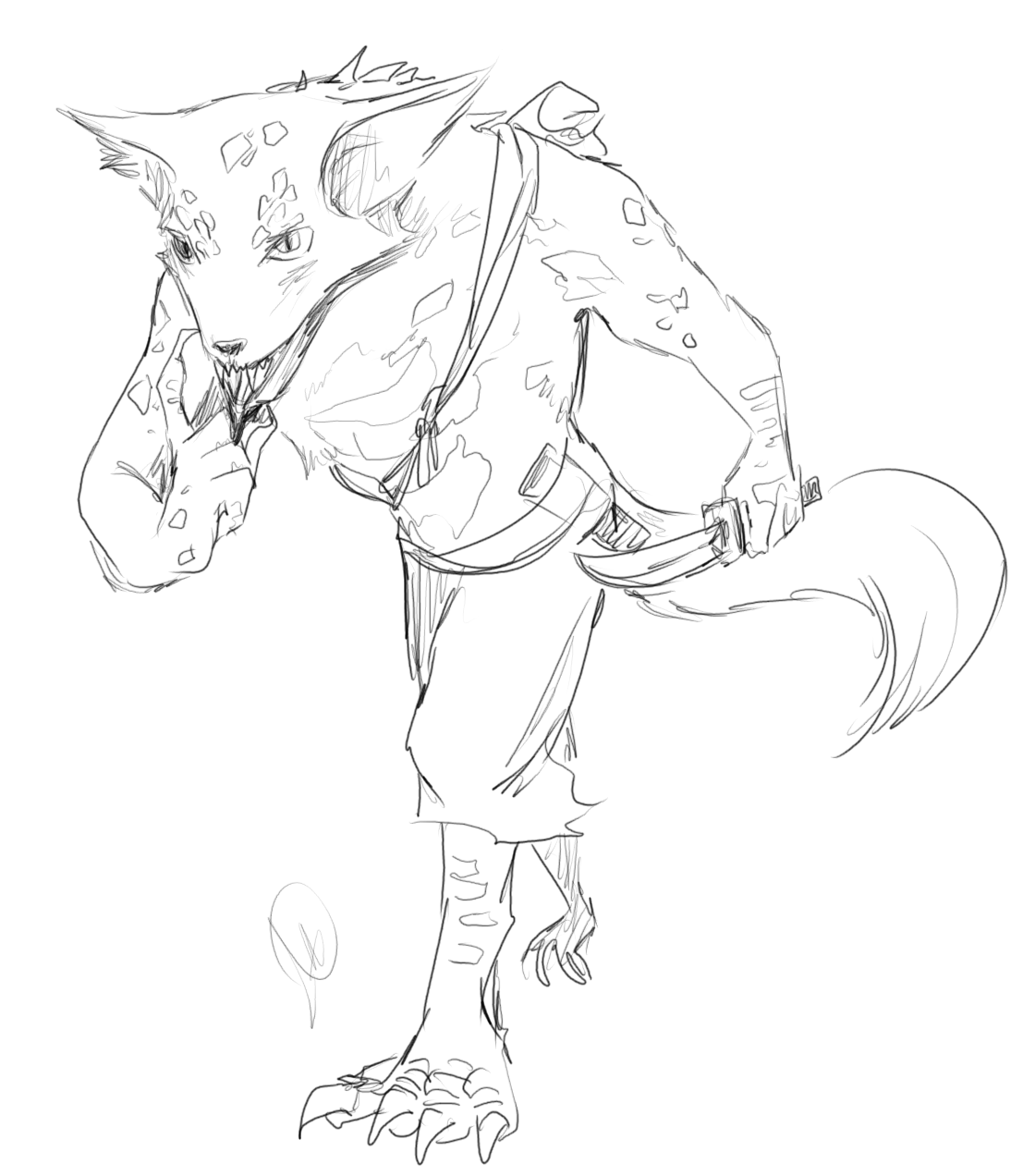 The lisen are a strange race of mammalian and reptilian heritage. Their bodies are lithe and limber like that of a cat. However, instead of bodies full of fur, they have patches of reptilian scales that pop up alongside their hairs. The fur of a lisen can take on a variety of colors, though it usually ranges from brown to grey and black. They have a narrow face with wide ears and a bushy, vulpine tail. Unlike a usual fox's tail, this appendage is prehensile and rather strong, like a lizard's. Their eyes have slit pupils and usually take gem-like hues of blue, orange, and green. All lisen have sharp claws and teeth as carnivores. Generally, lisen dress according to one of the two groups they can belong in: Head or Hind. Those of the Hind dress in thin, breathable clothing to best allow for movement, as well as concealment of weapons. The Head lisen wear more intricate robes that befit their nature as scholars and thinkers.

Most lisen tribes will recount the tale of their creation as one of providence. There existed a great cat-like being, known as the sun eater, and a great serpentine creature, known as the world eater. The two combined in a frightful and unholy union that created the lisen. It was not until the two were sealed away that the lisen surfaced as a race, almost as a curse. As a result of this origin, lisen were initially viewed as a people of bad omen, much like tieflings. This lore is fragmented and unknown by most, and even the lisen do not have specific names. As a result, this stigma has faded significantly from most public minds, allowing lisen to incorporate better into other societies.

Lisen are highly organized people, with a stringent split in systems based on specialization of skills. The Head lisen have more prominent feline and vulpine features. They are not considered a subrace, but are simply characterized with more intelligence. The Hind, on the other hand, have more serpentine and reptilian properties, making their bodies incredibly dexterous. Head and Hind are the two parts of lisen society, which makes this differentiation at birth to best train their abilities. A Head and Hind elder rule over the various lisen tribes jointly. There are around four to six tribes active today, most of them found in forests or jungle areas near civilization.

In their tribes, lisen have platonic family units. The Head lisen are particularly known to be cunning, cold, and lacking heart. Hind lisen lack emotions as well, but are primarily more focused on skill and physical achievement rather than intelligence. Periods of hunting, gathering, and even reproductive cycles are structured towards optimal conditions and results. Emotions are seen as inhibitions which would have doomed their race millennia ago. As such, lisen will often find other beings that have emotions annoying or intolerable due to their seemingly capricious feelings. This lack of empathy allows lisen to perform efficiently in tasks like assassination.

Names for lisen are simple and not tied to gender. All names are granted by the elder of their respective group. Every name has the address of either "Hernt," meaning Head, or "Letris," meaning Hind. This serves to identify the lisen's role, with their name following behind. So, a member of the Head with the name Ygar would be Hernt Ygar. If their name starts with a vowel that is not Y, the name is strung together with an apostrophe.

Lizard, fox, cat fusion creatures
Ability Score Increase. Either your Dexterity or Intelligence score increases by 3. As normal, you cannot increase any score over 20 with this trait.
Age. Lisen mature by age 5 and live up to around 150 years.
Alignment. While they are not evil, lisen can be very self-involved and dismissive of others. It is easier for them to be evil than good.
Size. Lisen are often around 5 feet tall, though they can be taller than 6 feet at most. Your size is Medium.
Speed. Your base walking speed is 30 feet
Darkvision. You can see in dim light within 60 feet of you as if it were bright light, and in darkness as if it were dim light. You can't discern color in darkness, only shades of gray.
Agile Thinker. You are proficient in the Acrobatics and Investigation skills.
Cold Heart. You have advantage on saving throws against being charmed.
Claws. Your claws are natural weapons, which you can use to make unarmed strikes. If you hit with them, you deal slashing damage equal to 1d4 + your Dexterity modifier, instead of the bludgeoning damage normal for an unarmed strike.
Slasher Wrath. As a bonus action, you can make a special attack with your claws. If the attack hits, it deals its normal damage, and you have advantage on your next attack roll. You can't use this trait again until you finish a short or long rest.
Languages. You can speak, read, and write Common and one other language of your choice.