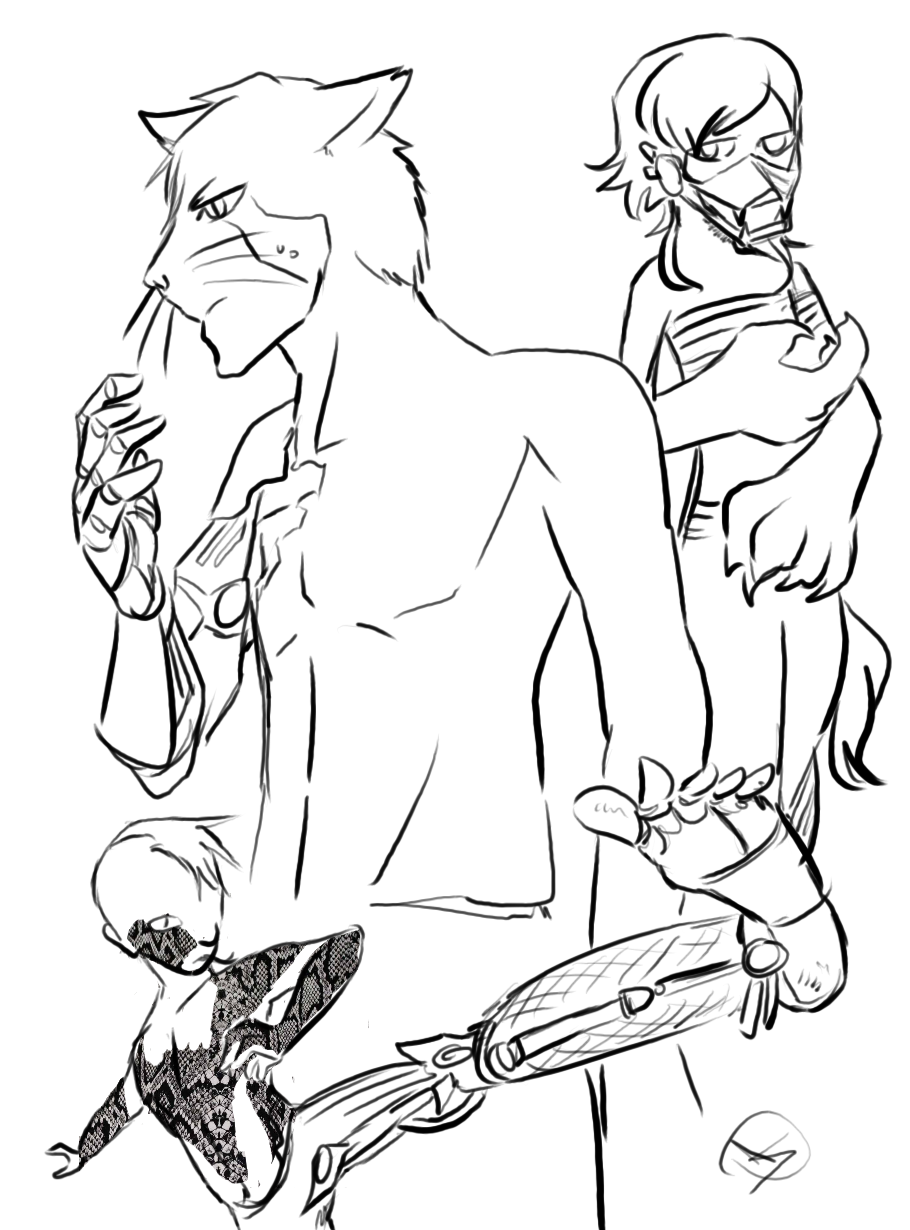 Leshen are chimerical humanoid creatures that may once have been fey, but now have forms so twisted and confusing, it is hard to say what they used to be at all simply by looking. They bear features from animals that their bodies adapted from. Some have feline features like cat eyes and ears, while others have reptilian snakeskin. It is a wonder any two leshen looks similar to each other. They are not your average anthropomorphic race, as they also sport bio constructed limbs, not unlike that of a warforged. Leshen are often described to look like a mess of parts randomly assembled to resemble something functional, but ultimately incoherent.

The leshen are believed to have come from the cosmos above and beyond. Some believe them to be otherworldly fey who became warped when traveling between planes, or even worlds. The result was a body mixed with multiple beings. Leshen themselves have a foggy recollection, but their elders espouse their origins to be steeped in legend. Supposedly, there was once a foolish deity of creation who made many things of biological and mechanical wonder. However, he saw his works were no so unique among the countless others in existence. In a rage, he broke his creations to pieces. When his anger abated, he was ashamed of what he had done. In his anger, however, he had forgotten the designs which he made his creatures by. So, he haphazardly put the pieces back together, like a child with a broken vase. As one would expect, he did not do a good job and ended up with a good handful of these monstrosities. The result he called the leshen.

The leshen are largely separated as a race across different terrains and areas of the world in groups. Due to their bizarre makeup, they are highly adaptable and versatile creatures, able to survive in a variety of environments. There are four main groups of leshen specific to their environments and neighbors lupine, feline, reptilian, and one rarer subset lagomorph. The lupines organize in packs and are very group-oriented. They are extremely loyal to a fault, always relying on one another as they hunt in their chilly homes. Feline leshen live in prides, where members can go as they please about plains and grasslands. They are very crafty when it comes to obtaining what they desire. Reptilian leshen are much more solitary, through high concentrations of them may be found in a wide area. They favor living in places with lots of foliage to give them cover, so they may scheme in private. Reptilian leshen are said to be the most manipulative of the four. Lagomorph leshen live in small groups often near where plains and forests meet. They are more open and curious about the world, but often get themselves into mortal danger when going farther than most would consider common sense to sate said curiosity.

Leshen names have some Sylvan influence in their names. Despite their hodgepodge forms, they do retain a feeling of nature.

Creatures that resemble a mishmash of beasts, humanoids, and some machine
Ability Score Increase. Either your Intelligence or Wisdom score increases by 1.
Age. Leshen fully mature around the age of 15 and can live about 1200 years due to their versatile bodies.
Alignment. Leshen usually have an innate curiosity and an eagerness to meet and befriend new friends and acquaintances. They tend to be good and/or chaotic.
Size. Leshen are taller than elves, standing at six to seven-and-a-half feet, and have a broader build. Your size is Medium.
Speed. Your base walking speed is 30 feet.
Darkvision. You can see in dim light within 60 feet of you as if it were bright light, and in darkness as if it were dim light. You can't discern color in darkness, only shades of gray.
Mechanical Fortification. The odd construct parts of your body do not make you immune to biological need but hint at augments in your unique constitution. You have advantage on saving throws against diseases and being poisoned.
Bionic Part. You have a tool or simple weapon integrated into the mechanical parts of your body, which you are proficient with. The weapon must have the light property. You must have at least one hand free to use this integrated tool or weapon.
Languages. You can speak, read, and write Common and Sylvan.
Subrace. Choose either the lupine, feline, reptilian, or lagomorph subrace.

Lupine leshen resembles canids, so either dogs or wolves and the like.

Feline leshen can simulate the grace and dexterity of tigers and other large cats.

Ability Score Increase. Your Dexterity score is increased by 2.
Feline Grace. You are proficient in the Acrobatics skill.
On Your Feet. You do not take falling damage from falling from heights less than 60 feet tall. You also have advantage in checks to land on your feet.

Ability Score Increase. Your Wisdom score increases by 2. As normal, you cannot increases a score over 20 with this feature.
Tempter. Your tongue is swift, and your wit is smooth. You are proficient in the Persuasion skill.
Cold-Blooded. Your blood flow is slow, making toxins even less volatile in your system. You are resistant to poison damage.

Ability Score Increase. Your Dexterity score increases by 2.
Honed Ears. You have advantage on Wisdom (Perception) checks using your hearing.
Natural jumper. Your jumps can be calculated using your Dexterity instead of Strength. If you do any standing jump, you jump as if you moved 10 feet before jumping. If you moved, you cover double the distance.

When creating a leshen character, you can use the following table of traits, ideals, bonds, and flaws to help flesh out your character. Use these tables in addition to or in place of your background's characteristics.