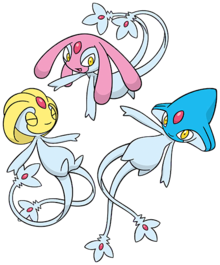 The three lake guardians reside in the three main lakes of the Sinnoh region. They are pokemon believed to have imbued mankind with their cognitive and empathetic gifts. The three pokemon are Mesprit, Uxie, and Azelf. They reside respectively in Lake Verity, Acuity, and Valor. They all resemble fairies, with a red jewel on the center of their heads and two red jewels on their twin tails. They are said to have been born of the same egg, made by Arceus, the Creator. It is said Arceus made them with the power to stop the rampages of his sons if they ever became enraged, thus saving time-space from destruction. This power is known to be parallel to their hidden use, which is the Red Chain. Using the Chain allows one control over Dialga and Palkia. They all possess the powers to leave their bodies and travel as spirits without dying, as well as teleport. A single thread of telepathy also links them all so they may come to each other's aid if the need arises.

It is said that at the beginning of human civilization, three gifts were given to the king. One was a curved stone which emanated goodness and sadness, allowing for benevolence and the understanding of others. The second was a mirror which reflected oneself and allowed for the seeing of flaws. Those who stared into it and contemplated learned of much wisdom about themselves. The last was a mighty sword known to be an inspiring blade. Those who wielded it forged their own fates with their wills and inspired others with their valor.

Mesprit is the pokemon of emotions. It inspired pathos in humans, teaching them sadness, happiness, and all emotion. People learned how to cry and smile and laugh from this pokemon. However, those who touch it risk surrendering their feelings, as they will become emptied of all emotion, returning it to Mesprit. Mesprit's sacred place is its home in the cave amid Lake Verity. It often appears outside, however, sometimes playing mischievous jokes. Mesprit is seen most outside its home, teleporting from place to place elusively.

The bringer of knowledge, Uxie created all knowledge in the universe and gifted mankind with it. The ability to learn and pass on what one knows is by the grace of Uxie. It is possibly the shyest of the lake guardians and always keeps its eyes closed. Those who are unlucky enough to be stared upon by Uxie have their mind wiped, knowledged drained. Uxie also has the ability to conjure illusions by playing with the minds of invaders. It lives quietly in its snowy home on Lake Acuity. Students may sometimes come by to pray to Uxie for help on an upcoming exam.

Azelf is perhaps the bolder of the three pokemon. It is a cautious pokemon that doesn't play like Mesprit, nor shy away like Uxie. Particular to Azelf is its ability to have its displaced spirit enter the body of another. From within, Azelf can probe one's self and control the body. Likewise, even when outside the body, Azelf can control the will of another. If Azelf is harmed, those who harmed it may become drained of all their willpower. As such, their bodies will forever fall limp without the will to move and they will be immobile for eternity. Azelf is considered a primary member of the lake guardians, as it can control the will of the other two. It resides in Lake Valor, where many people come just for the ignorant escapades.