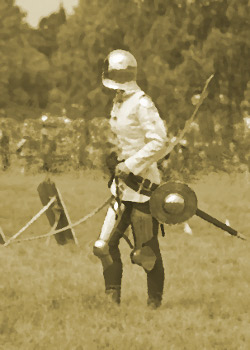 A female kingsguard with bow, buckler, and blade. Surveying during a festival.

Kingsguard's are Noble Knights who protect the wild frontier and master the use of the bow. They begin their journey as able hunters who rely on their arrows and wilderness skills to survive. As they progress they become powerful skrimishers and wilderness experts. They are unique masters of hunting and stalking especially against their chosen quarry. They also gain access to a small amount of divine spells to help them survive in harsh situations. They differ from woodsmen in appearance as they never wear green or brown. Kingsguards prefer to wear the uniform of their Lord.

All of the following are class features of the Kingsguard.

Weapon and Armor Proficiency: Proficient with all simple and martial weapons, and with light armor and shields (except tower shields).

Favored Enemy: 1st level. Select a creature type from among those given on Kingsguard Favored Enemies List. The kingsguard gains a +2 bonus on Bluff, Listen, Sense Motive, Spot, and Survival checks when using these skills against creatures of this type.

At 5th level and every five levels thereafter (10th, 15th, and 20th level), the kingsguard may select an additional favored enemy from those given on the list. If the kingsguard chooses humanoids as a favored enemy, he must also choose an associated subtype of humanoids such as elves, dwarfs, or humans. These bonuses do not increase with level.

Rapid Shot : 2nd level. A kingsguard gains Rapid Shot as a bonus feat even if he does not have the normal prerequisites.

Endurance : 3rd level. A kingsguard gains Endurance as a bonus feat even if he does not have the normal prerequisites.

Cut Finesse : 4th level. With a light weapon, rapier, scimitar, or longsword made for a creature of your size category, you may use your Dexterity modifier instead of your Strength modifier on attack rolls.

Manyshot: 6th level. A kingsguard gains Manyshot as a bonus feat even if he does not have the normal prerequisites.

Woodland Stride : 7th level. a kingsguard may move through any sort of non-magical undergrowth (such as natural thorns, briars, overgrown areas, and similar terrain) at his normal speed and without taking damage or suffering any other impairment.

Evasion: 9th level. a kingsguard can avoid unusual attacks with great agility. If he makes a successful Reflex saving throw against an attack that normally deals half damage on a successful save, he instead takes no damage. Evasion can be used only if the kingsguard is wearing medium, light or no armor. A helpless kingsguard does not gain the benefit of evasion.

Camouflage : 13th level. A kingsguard of 13th level or higher can use the Hide skill in any sort of natural terrain, even if the terrain doesn’t grant cover or concealment.

Bane of Enemies : 17th level. Any weapon the character wields against one of his or her favored enemies is treated as a bane weapon for that creature type (thus, its enhancement bonus is increased by +2 and it deals +2d6 points of damage). This ability doesn’t stack with other bane or similar abilities.

Spells: Beginning at 4th level, a guard gains the ability to cast a small number of divine spells, which are drawn from the kingsguard spell list. A guard must choose and prepare his spells in advance (see below).

Like other spellcasters, a guard can cast only a certain number of spells of each spell level per day. His base daily spell allotment is given on Table: The Kingsguard. In addition, he receives bonus spells per day if he has a high Wisdom score. When Table: The Kingsguard indicates that the guard gets 0 spells per day of a given spell level, he gains only the bonus spells he would be entitled to based on his Wisdom score for that spell level. The guard does not have access to any domain spells or granted powers, as a cleric does.

A guard prepares and casts spells the way a cleric does, though he cannot lose a prepared spell to cast a cure spell in its place. A guard may prepare and cast any spell on the kingsguard spell list, provided that he can cast spells of that level, but he must choose which spells to prepare during his daily meditation.

A guard's caster level is one-half of his kingsguard level.

Spells: The kingsguard's caster level is equal to one-half his or her class level, as normal. The kingsguard’s number of spells per day does not increase after 20th level.

Quarry: The damage bonus to your chosen quarry increases by 2 every five levels after 20th.

Characters with ranks in Knowledge (local) can research Kingsguard to learn more about them. When a character makes a skill check, read or paraphrase the following, including information from lower DCs.