“Holy Asmodeus, what is that!?” Said a poor farmer. The 10 foot tall spiked absolute war machine roared, “Hi, new friend, my name is 81N60, I’m wagging my tail but you cannot see it because I am in a big metal suit! I love my big metal suit!”

Kaitons vary in appearance, different models have different appearances, for example, Kaiton Heavies are larger than others, because of this, some of them have treads instead of feet. They are usually roughly humanoid, and can modify themselves to suit their needs. In the center of their body is a lich phylactery which powers the Kaiton, as well as a blood like alchemical fluid that harnesses the thoughts of the pilot, only when in range, the range being in the cockpit, and turns it into psychic energy, which is used to telepathically move the suit. They are usually made from metal, but sometimes have stone or wood outer casings. 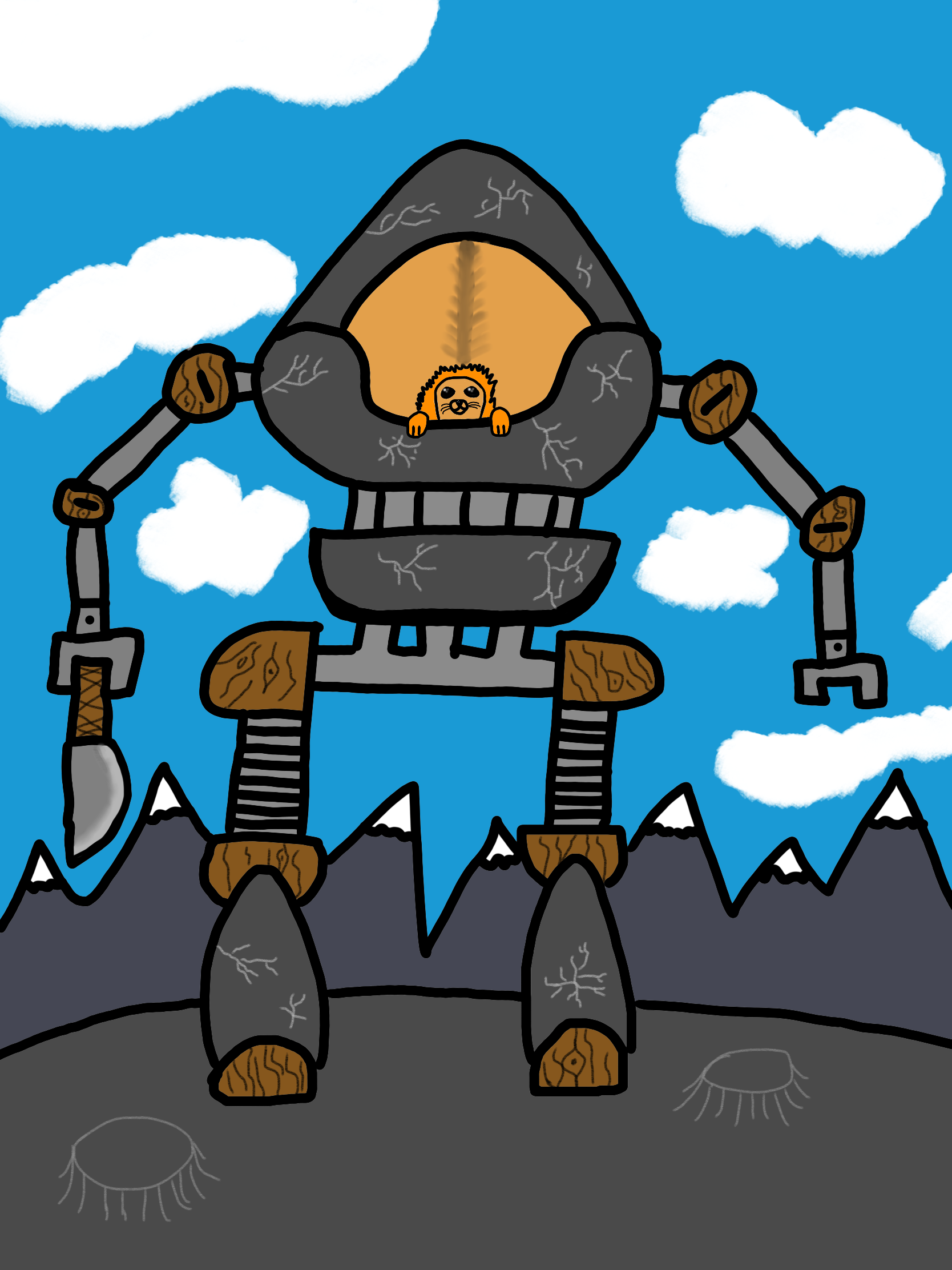 A digital drawing of a Kaiton, by Kanon

Years ago, a clan of artificers known as Kaito propped up. This band made powerful weaponry and machinery, one of these machines is known as a Kaiton. They consist of a mechanical power armor suit piloted by small pet animals that were awakened with magic.

Kaitons serve different purposes, and come in all sizes and shapes, whatever the case, they serve their Kaito, be it mining, combat, or simply companionship.

The names of Kaitons are their pilot’s pet name, with compatible letters replaced with numbers that look like them, additionally, all letters are in all capital letters. The last name is always Kaito.

A Mechanical Power Armor Suit piloted by an awakened pet animal.
Ability Score Increase. Your Strength score increases by 1 and your Charisma score increases by 1.
Age. When the pet gets too big for the suit, a new pet is placed inside of it, the suit needs to be repowered every 20-30 years by a new lich phylactery, doing so destroys the lich bond to the phylactery. After about 300 years, they will start to break down, and “die” of old age.
Alignment. The alignment of the Kaiton is usually Chaotic Good, as that is most common for pets, but, as a pet’s personality varies, so does a Kaiton’s.
Size. Kaitons vary widely in height and build, from roughly a cubic yard to well over 8 feet tall, but the default model is 6 feet tall. Your size is Medium.
Speed. Your base walking speed is 30 feet.
Smell. Your pilot’s strong sense of smell grants you advantage on Wisdom (survival) checks made to smell or use your sense of smelling in any way.
Modifications. For every player level, you get one mod slot. Whenever you kill a lich, you get a high tier mod blueprint. Whenever you do a long rest, you have the choice to do an Intelligence (Arcana) check, with a DC of 20, if you succeed, you get a low tier mod blueprint. Both kinds of mod blueprints can be read at any time to give the player a mod recipe, with a recipe, the player gets the ability to craft a mod, each mod uses 1 mod slot. To craft a mod, you must expend no more than 10,000 gold pieces, the specific amount is decided by the DM, and takes 1 day for every 500 gold pieces to make, if it takes less than 500 gold pieces, it takes 6 hours. When the mod is made, the effect that the player and DM agreed on is applied to the player, and of course, all resources, time and gold, are used up. It can provide the player with an ability, or passive effect. Low tier mods must be approved by the DM, the effect of high tier mods are decided by the player however, but the DM still decides the cost. If the DM wants to, they can lower the price of a mod in instances of 100 gold pieces. For every 100 gold pieces removed from the price, the mod gains a misfire stack. The DM can lower the price all they want until 80 misfire stacks have been reached. If the effect of a mod is passive, for every day it comes into play, at the end of the day, the player must roll percentile dice, if their roll is less than the amount of misfire stacks the mod has, then the mod breaks, and must be rebuilt, using the original price of the mod, ergo, having the same time requirement, however, the player does not need to get a new blueprint. If the effect of a mod is an ability, whenever the ability is used, after the ability is over, the player must roll percentile dice, if their roll is less than the amount of misfire stacks the mod has, the mod breaks, and must be rebuilt using the rules previously stated,
Pilot Risk. Because the pilot is located in the suit, certain hazards, if hazardous enough, can put the pilot at risk. This means that if an attack that deals acid or piercing damage, gets a critical hit, and is aimed at the cockpit hits, the Kaiton will start making Death saves, after three failed death saves, the Kaiton dies, after three successes, they become paralyzed until next sunrise, where the pilot wakes up, injured. The pilot will remain injured for 3 more days, in this time period, the Kaiton has disadvantage on death saves.
Bolted Weaponry. Two-handed weapons can be bolted onto a Kaiton so that they may be used with only one hand. It takes a short rest to bolt, unbolt, or replace a weapon on a Kaiton.
Eject Pilot. Kaitons have the ability to eject their pilot, this summons a tiny sized beast type creature with 5 hit points in front of the Kaiton on the ground, as well as paralyzes the Kaiton. During this time, the Kaiton automatically succeeds all death saves with a critical roll, even if caused by an attack, however, if the tiny beast dies, the Kaiton dies. While this effect is active, the player controls the tiny beast. During the player’s turn, the player can move, moving at a speed of 50 feet, attack(at melee range), dealing 1d4 slashing damage, or, if the player’s tiny beast is within 5 feet of the Kaiton, end this effect, when the effect ends, if the Kaiton has 0 or less hit points, the Kaiton’s hit points a restored to one, and the tiny beast despawns. After an attack or movement, the tiny beast can use a bonus action to make a noise, be it bark, hiss, or other, anybody within 150 feet of the tiny beast will hear it.
Constructed Body. Because the “bodies” of Kaitons are just mechanical suits, whenever a Kaiton goes to a Kaito camp or base, if it takes a long rest, it has the option to expend 25,000 gold in magic items, artifacts, lich phylacteries, or materials. At the end of that long rest, it can change from one subrace to another.
Languages. You can speak, read, and write Common as well as the language of your creator.

The Kaiton Heavy is a Kaiton Subrace, it’s size is large and it weighs and has a height of twice as much as it normally would. They‘re made to do tough work and defend camps.

The Kaiton Oracle is a Kaiton Subrace, it’s size is small, and it weighs and has a height of half as much as it normally would. They are made to build and design different machines.

Ability Score Increase. Your Intelligence score increases by 1 and your Wisdom score increases by 1.
Modifier. The Kaiton Oracle is made to build and design, as such, they get advantage on Intelligence (arcana) checks when designing blueprints. Additionally, they can remove misfire stacks on mods, up to 20 per mod, unfortunately, this also means that the -100 gold pieces discount that occurs when a misfire stack is applied to a mod is removed with it.
Mystic Construction. Kaiton Oracles were built to build, and do so with powerful magic, this gives them the ability to cast 3 cantrips a day, these cantrips must be conjuration magic though. At 3rd level, they can magically conjure a clone of themselves for 10 gold pieces worth of materials or magic items, and for every hour it remains functional, an addition gold piece worth of materials or magic items is required. The clone can make clones of itself, though the cost remains, and there can be a maximum of 5 clones, including the player. If a clone is destroyed or the player runs out of materials/decides not to use said materials, i.e. the clone is no longer being supplied with magic and resources, it will turn to mystical ash and dissolve into air. The player must do a long rest in order to make a clone again.
Magic Charge. In order to cast conjuration cantrips or conjure a clone, the player must have an arcane focus or magic item, this magic item or arcane focus is destroyed at the end of a day where a cantrip was cast or a clone was conjured.
Smallness. Kaiton Oracles are very small so that they can direct their energy to magic and so they maneuver better for building things. This makes them need to make a DC 14 Constitution save when hit by a heavy melee weapon that deals bludgeoning damage. If they fail, they are stunned for 1d4 rounds.

The Kaiton Scout is a Kaiton Subrace, it’s size is medium. They are made to search for new places to camp and to search the area around their camp for hostiles.

Ability Score Increase. Your Dexterity score increases by 1 and your Charisma score increases by 1.
Alternate Vision Modes. The Kaiton Scout is equipped with thermal and nocturnal imaging, giving them Truesight at a range of 60 feet, however, they cannot see into the Ethereal Plane.
Sprint. Kaiton Scouts were built to move fast and precisely, this gives the Kaiton Scout a +10 feet movement speed bonus, as well as advantage on Dexterity based checks and saves.
Oiling. Kaiton Scouts must be oiled to move how fast they do, as such, if a Kaiton Scout goes 5 days without consuming some form of oil, their racial trait, “Sprint,” will not work and the Kaiton Scout gets a -1 Dexterity penalty, as well as a -5 feet movement speed penalty.
Light Joints. Kaiton Scouts have joints made of lighter materials so that they can move faster, because they are made of these lighter materials, they will easily start to break down when exposed to acid. This means that whenever a Kaiton Scout takes acid damage, they must make a DC 14 Constitution save, if they fail, they gain a level of exhaustion.

The Kaiton Jet is a Kaiton Subrace, it’s size is medium. They are made for aerial surveillance and transporting heavy machinery, goods and people.

Ability Score Increase. Your Dexterity score increases by 1 and your Wisdom or Intelligence score increases by 1.
Telescopic Lenses. The Kaiton Jet is equipped with superior sight receptors and nocturnal imaging, giving them Superior Darkvision at a range of 120 feet, they also have advantage on all Wisdom (perception) and Intelligence (Investigation) checks.
Jet flight. Kaiton Jet are created for the sky, they are created with light weight material and are equipped with thrusters giving them a 40 foot fly speed.
Long Ranged Artillerist. You gain the benefits of the sharpshooter feat and you can use ranged two handed weapons with one hand as long you are flying.
Flight Not Fight. Kaiton Jet were created for speed and ranged combat, if they take piercing damage or acid damage they must succeed a DC 14 Constitution save or be stunned for 1 round and lose their flight speed for an additional round. The DC is increased by 2 if they are flying.

When creating a Kaiton character, you can use the following table of traits, ideals, bonds and flaws to help flesh out your character. Use these tables in addition to or in place of your background's characteristics.