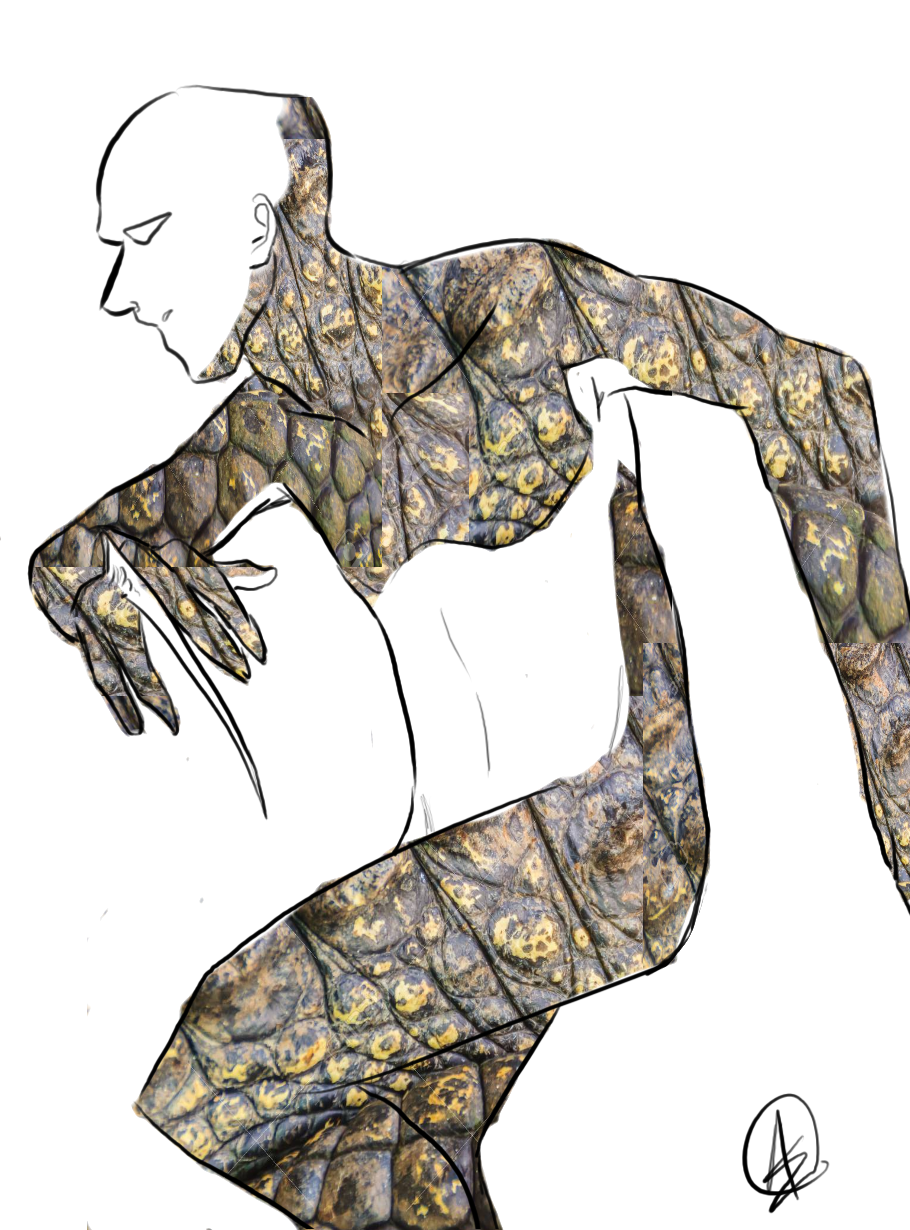 Iwin are a patchwork of skin and scales. Typically, iwin have two thick bands of scales wrapping around each arm, intertwining with each other, before running along their shoulders and meeting at their neck and spine. A similar pattern of scales can usually be found on their legs. The scale can also, albeit rarely, found on the chest and sides of the torso on both male and female iwin but are never found on the palms, stomach or soles of the feet. Iwin scales become coarser and more jagged the older the individual gets. Most iwin have scales that range from earthy green to dark brown and their skin dull earthy-plum to a dark olive. Aimult, however, are easily distinguishable due to their ochre skin and scales.

Iwin are born with smooth, snake-like scales that they malt around the age of 90, signifying their transition to adulthood. In place of these scales grow tougher, jagged scales akin to that of a crocodile. Aimult, and iwin subrace, has biology that differs as they are infertile due to being a half-breed. Aimult are the result of a Human, elf, goliath or tiefling breeding with an iwin. All other races cannot breed with Iwin. Moon elves bare the only exceptions to these rules as when they mate with an Iwin they can produce fertile offspring. In accordance with their reptilian facade, iwin have a semi-retractable claw between their ring and middle finger. The claw comes out between and slightly above the knuckle. Iwin have bigger hands as a consequence of housing this claw.

Iwin folklore claims that their race originates from the unholy union of a moon elf and a demon.

On the whole, iwin prefer mountainous terrain with warm, dry climates in which to build their strongholds and camps. Iwin typically will not travel more than a week (by distance) away from their home stronghold, or the stronghold they were last at. Iwin likely to be encountered outside of this distance are most likely on a quest for their stronghold or in exile. When a melanic iwin is born they are seen as harbingers of war or plagues. Contrary to this, albino individuals are seen as premonitions of good fortune and prosperity. Scholars attribute this to the rarity of melanic and albino iwin as virtually non-existent.

Iwin build their strongholds overlooking valleys and overhanging cliffs. They build their strongholds out of clay and wood, except for their longhouses, which are built out of heavy mountain stone. The longhouse serves as a church, feast-hall, and nursery. Typically iwin longhouses are built along the central axis of their stronghold. Their crypts are built into the mountains beneath these longhouses. When a member of the stronghold dies, and they are in the stronghold, their body is decorated with mountain flowers and spice before they are cremated. Most iwin choose to have their most prized possession cremated with them. Perhaps the most barbaric tradition the iwin practice is after the cremation is complete most of the individual's ashes are mixed with clay and used to build new walls, or reinforce old ones. Iwin believe that placing their loved one's ashes in their walls protects them from evil spirits. Any bones left and ashes not used are buried in a crypt space along with any possessions they wished to have buried with them.

Iwin language, and by extension their names and culture, are based around a mixture of long-forgotten grace & civility and primal druidic urge . Their names also follow the structure of a surname given by the clan.

Clan names are typically named after an aspect of air and an aspect of earth, referencing their mountainous homeland.

Mountain folk with a strange language as well as scales and skin.
Ability Score Increase. Your Strength or Dexterity score increases by 1, and one other ability score of your choice increases by 1.
Age. Iwin are first considered teenagers at 30 and reach maturity at 90, living until 430. The oldest Iwin can reach 460.
Alignment. Iwin avoid chaotic and evil alignments, save for lawful evil and chaotic good. Iwin are rarely true neutral as well.
Size. Iwin are Never above 7 feet tall and never below 6 feet. Your size is Medium.
Speed. Your base walking speed is 30 feet and have a climbing speed of 30 feet.
Claws. Your clawed fist is a natural weapon, which you can use to make unarmed strikes. If you hit with it, you deal slashing damage equal to 1d4 + your Strength or Dexterity modifier, instead of the bludgeoning damage normal for an unarmed strike.
Powerful build. You count as one size larger when determining your carrying capacity and the weight you can push, drag, or lift.
Strong climbers. You are proficient with either the Athletics or Acrobatics skill.
Natural Armor. You have tough, scaly skin. When you aren't wearing armor, your Armor Class is 12 + your Dexterity modifier. You can use your natural armor to determine your AC if the armor you wear would leave you with a lower AC. A shield's benefits apply as normal while you use your natural armor.
Poison Resilience. You have advantage on saving throws against being poisoned, and you are resistant to poison damage.
Languages. You can speak, read and write Common and one other language of your choice.